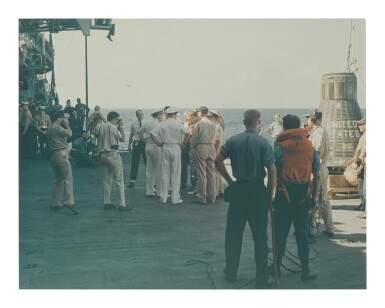 WALTER "WALLY" SCHIRRA ABOARD THE USS KEARSARGE AFTER SPLASHDOWN. 3 OCTOBER 1962.

Vintage chromogenic print, image taken by Bill Taub, 13 1/2 by 10 5/8 inches, mounted on matboard; one or two chips to edge, some toning to mat.

During the Mercury-Atlas 8 mission, Pilot Wally Schirra orbited the Earth six times in the Sigma 7 spacecraft. Following the nine-hour flight, Schirra splashed down in the prime target area in the central Pacific, where aircraft carrier USS Kearsarge was waiting. Three destroyers were also positioned along the orbital path. Additionally, four search aircraft had been assigned to the area, and three recovery helicopters were based aboard Kearsarge. Sigma 7 was hoisted aboard Kearsarge forty minutes after landing, and five minutes later, Schirra blew the explosive hatch and climbed out to be met by a waiting crowd.