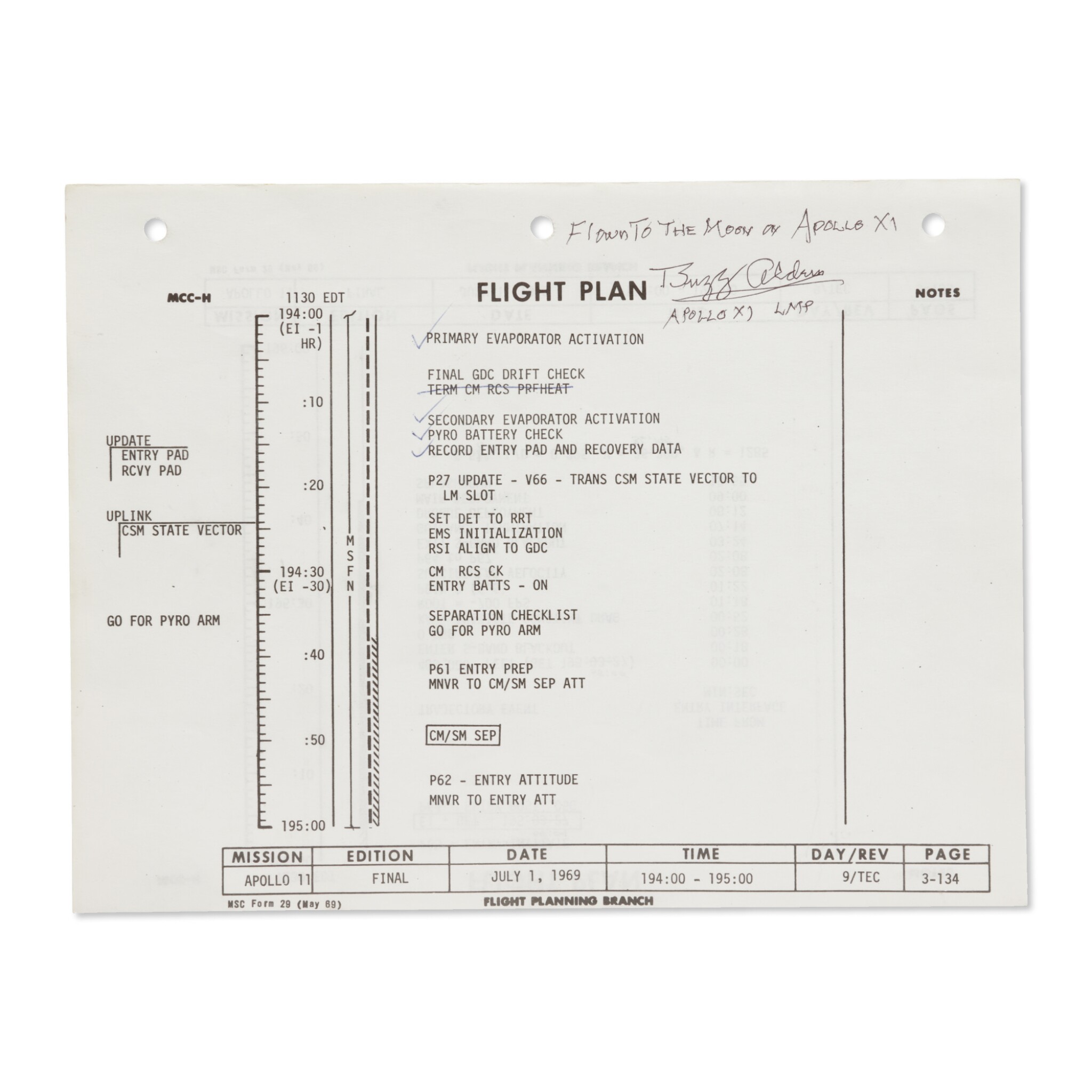 "SPLASHDOWN" — THE CREW OF APOLLO 11 MAKES IT HOME ALIVE, FULFILLING THE GOAL SET BY PRESIDENT JOHN F. KENNEDY OF "LANDING A MAN ON THE MOON AND RETURNING HIM SAFELY TO EARTH."

"SPLASHDOWN" — THE LAST PAGE OF THE FLOWN APOLLO 11 FLIGHT PLAN. This sheet and the preceding lot (109, the first page from the Flown Apollo 11 Flight Plan, which begins with the word "LIFTOFF") are the Alpha and the Omega of the FLOWN Apollo 11 Flight Plan, the manual used by the Apollo 11 Crew to guide them on mankind's greatest journey. This sheet details the crucial timeline of activities to be performed during the final two hours of the mission including jettisoning the Service Module, and re-entry into Earth's atmosphere, travelling at a speed of 36,000 feet per second, before finally splashing down in the Pacific Ocean, where the crew and the Command Module "Columbia" were recovered by the USS Hornet.

BUZZ ALDRIN’S letter reads in part: “This certificate of authenticity certifies that the accompanying Page 3-134/135 from the Apollo 11 Flight Plan, Part No. SKB32100080-350, S/N 101 was flown to the Moon and used aboard the Command Module "Columbia."

On July 24, 1969, the crew of Apollo 11 was on the verge of returning to Earth after its first humans walked upon the surface of the Moon at "Tranquility Base." Thus, completing the late President John F. Kennedy's challenge to America to "…commit itself to achieving the goal, before this decade is out, of landing a man on the Moon and returning him safely to the Earth."

During our lunar voyage, we were guided by our flight plan, which contained a timeline with instructions as to our tasks during each phase of the mission. Page 3-134/135 is the last page of the Apollo 11 mission timeline. This page represents the timing of our final tasks of the flight ending with our safe splashdown in the Pacific Ocean at 12:49 pm EDT.

The two pages numbered 3-134 and 3-135 shown on the leaf represent the last hour and forty-nine minutes of our mission. By this point, we were traveling 17,322 feet per second, and we were 11,463 miles from Earth. We had several tasks to perform in that last hour to land safely.

One of the first chores to perform was for Mike to start the primary and secondary evaporators. The evaporators would be needed after the service module (SM) had been jettisoned to continue to cool the command module. They boiled water warmed by the spacecraft's interior heat and vent it out into space. We warmed up the Reaction Control Systems (RCS), we checked the amperage on the pyrotechnic battery that would fire the explosive bolts to separate the SM from our command module (CM) and wrote down the Pre-Advisory Data (PAD) for our entry.

We uploaded are revised spacecraft attitude from mission control to the CM guidance computer. This data would point us in the proper direction so we would enter the Earth's atmosphere at the correct angle. The Entry Monitor System (EMS) was loaded with data for the PAD and started.

Our re-entry to Earth had now begun. The Apollo Guidance Computer started our re-entry procedure with P61, the entry preparation which measured our CM's acceleration (we would hit the atmosphere at 36,000 feet per second) as well as review all data that had been loaded in the last PAD update. Next would come P62, which performed the CM and SM separation maneuver. At that point, Mike, who was now lying in the left couch, maneuvered the CM into the re-entry attitude.

Now flying at our highest rate of speed at a little over 36,000 per second (the same speed at which we escaped Earth's gravitational pull on the way to the Moon). As our CM started to intersect with the high reaches of the upper atmosphere and we started to build up G-forces, our computer switched to the entry programs. We were now dropping back into Earth's atmosphere on our way to splashdown, which was still over a thousand miles away. We have turned to the last page in the flight plan, page 3-135, and we followed the tasks as we flew "Columbia" to our landing point.

Page 3-135 lists all the steps and times that we would go through until the end of the flight. At 400,000 feet in altitude, we would start to feel the effects of deacceleration in the force of "G's." Within 90 seconds we would hit our maximum g-forces on our bodies during the descent. The P64 program handled the spacecraft's re-entry as it continued its flight through the atmosphere in a flight path that would carry us over a thousand miles from where we entered the atmosphere to the landing area.

Once we had slowed down to suborbital velocity, our computer switched to the final program of the flight, P67. We regained our communications link with Houston after the ionizing blackout. Finally, the drogue chutes deployed. At 10,000 feet above the ocean, our three main parachutes deployed, and we started our final descent to the vicinity of the recovery forces. At 12:49 pm EDT, we impacted the surface of the Pacific Ocean.

The final line on the page gives the planned Earth entry angle of 6.5 degrees, the Lift over Drag ratio (L/D) of the spacecraft of .295 (the L/D ratio for a Boeing 747 is 15). We passed through the Entry Interface traveling at 36,195 feet per second, and our predicted distance to our splashdown point was 1,285 miles. In reality, due to stormy weather at our original landing point, we had to fly just over 1,400 miles from our atmospheric entry point to splashdown. That was the furthest distance that any Apollo CM ever flew, and we landed less than two miles from our predicted landing point.

In 2012, Congress allowed Apollo Era astronauts to keep disposable items like the Apollo 11 Flight Plan from their mission as personal mementos. This historic page has remained a treasured part of my private space collection for 50 years, ever since NASA presented it to me after my return from the Moon in 1969.

This Flight Plan page numbered 3-134/135 is one of the few objects used in lunar orbit and is also a rare example of an astronaut flight certified object used on the first landing on the Moon."