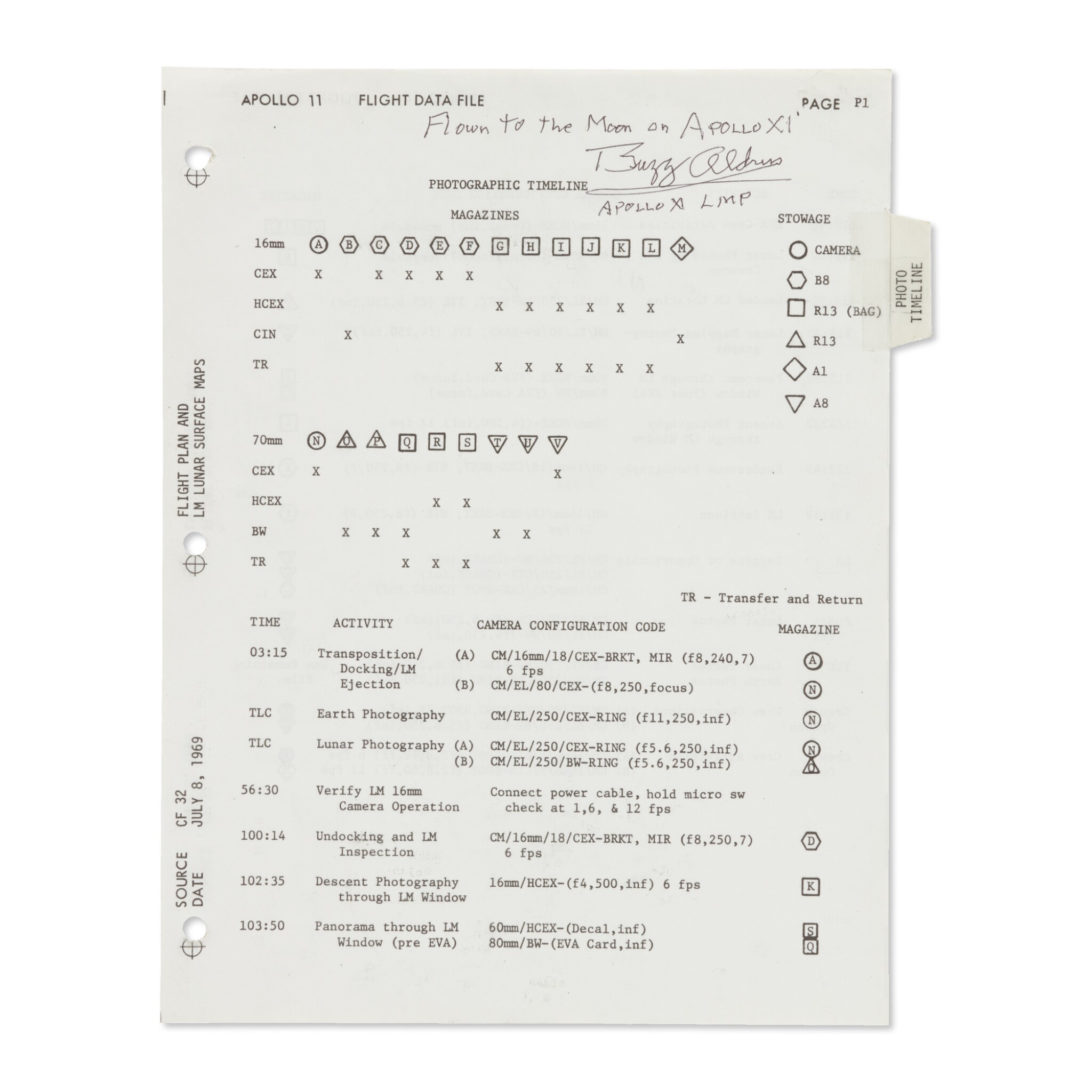 THE PHOTOGRAPHIC TIMELINE FOR MANKIND'S FIRST LUNAR LANDING. This sheet contains the detailed instructions on camera configurations and film magazines to be used to photographically document the Apollo 11 Mission, from Earth and Lunar photography, to lunar descent, panoramic shots from the LM window, EVA Crew activities, lunar mapping photography, rendezvous, and more.

BUZZ ALDRIN’S letter reads: “This certificate of authenticity certifies that the accompanying Page P1/P2 from the Apollo 11 Flight Data File, Part No. SKB32100080-201 S/N 1001 was flown to the Moon and used aboard the Command Module "Columbia."

On July 16th, 1969, Neil Armstrong, Mike Collins and I lifted off from Pad 39A at the John F. Kennedy Space Center on our journey to perform humankind's first landing on the Moon at the Sea of Tranquility. During our lunar voyage, we took many photographs of as a visual record of each phase of our mission as this was a photographic record of our first steps upon the Moon.

It was essential to visually document such events as the lunar landing, landmarks on the Earth and the Moon, and our lunar spacewalk. As with all the space flights, we had instructions in our Flight Data File (FDF) of what activities we were to photograph, which cameras to use, and which film magazines had to use during those sessions.

Page P1/P2 of the Photographic Timeline for the FDF was our guide to where, when, and how to take photographs on Apollo 11. This simple two pages on a single leaf provided the information in diagram and timeline form that we needed to perform our photographic tasks.

The diagram on page P1 of the Photographic Timeline represents each film magazine that we carried on the Moon, where each magazine was stored, the type of film that was in each magazine, and where each magazine was stowed within our command module (CM). We carried modified Hasselblad 70mm 500EL SLR cameras as well as Mauer 16mm Data Acquisition Cameras (DAC) in both the CM and lunar module (LM). The diagram has separate lines for the 16mm DAC on the top and the Hasselblad 70mm cameras on the bottom. Each magazine for both camera types is lettered in alphabetic order starting with "A" through "M" for the 16mm DAC magazines and "N" through "V" for the 70mm SLR cameras. The symbols that surround each letter are to allow us to locate each magazine in a stowage locker. The symbology key is located on the side of the diagram. The film type is located on the left side of the chart, CEX, HCEX, and CIN for the 16mm DAC and CEX, HCEX and BW for the 70mm SLR. CEX and HCEX are color films, and BW is for Black and White film. Finally, the TR is not a film type but told us which magazines would be transferred between the CM and the LM after our EVAs on the lunar surface were complete.

The timeline on the bottom half of P1 and the entire page of P2 were the instructions for time of photographs, the activity that we were to photograph (or film), the camera type as well as the lens and film type, the camera settings, and the magazine to be used. As an example, the first activity was the first docking between the CM and LM. The configuration states that the 16mm DAC and 70mm SLR camera was to be used in the CM with an 18mm lens on the DAC and an 80mm on the SLR. Color film for both cameras, the lens and shutter settings for each camera. The last column told us which film magazine to use and where to find it. The Timeline page was easy to follow, but so important because, in the end, our mission is remembered due to the photographs taken during our flight.

This Flight Data File page numbered P1/P2 is one of the few objects used in lunar orbit and is also a rare example of an astronaut flight certified object used on the first landing on the Moon.”

See related lot 107, the label from the LUNAR SURFACE FLOWN Film Magazine "S" referenced on this sheet, as well as a the LUNAR SURFACE document written by Buzz Aldrin while in the LM, with instructions on the development of the film in Magazines S, R, and Q, as they had deviated from the instructions listed on the present sheet.