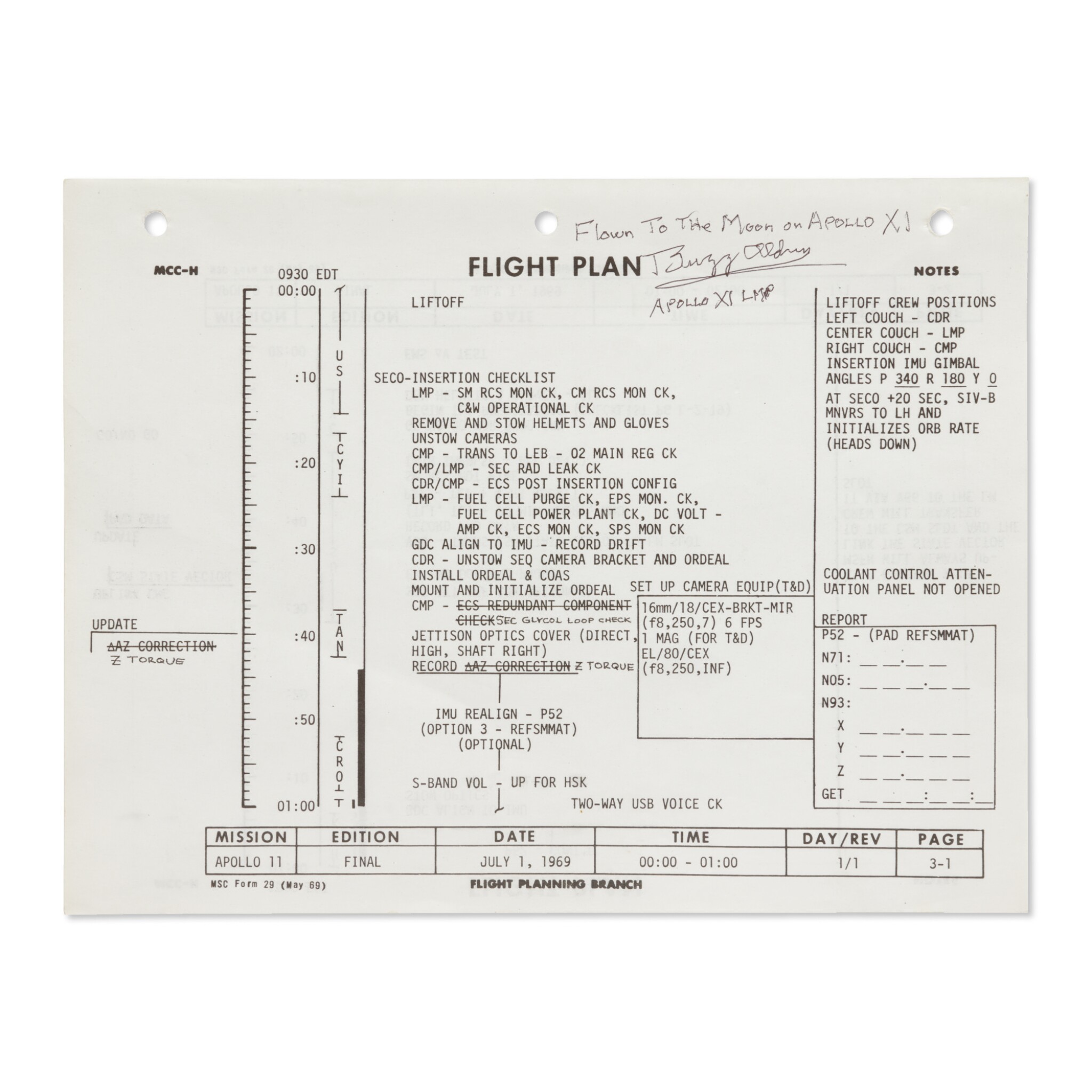 "LIFTOFF" —THE FIRST PAGE OF THE FLOWN APOLLO 11 FLIGHT PLAN. This sheet and the following lot (110 - the final page from the Flown Apollo 11 Flight Plan, which ends with the word "SPLASHDOWN") are the Alpha and the Omega of the FLOWN Apollo 11 Flight Plan. The present sheet details the crucial timeline of activities to be performed by the crew during the first two hours from moment 0:00, after Mission Control's "Good luck, and Godspeed", when Mission Commander Neil Armstrong, Lunar Module Pilot Buzz Aldrin, and Command Module Pilot Michael Collins were launched into space by the awesome Saturn V Rocket, and hurtled on their way to accomplish mankind's greatest achievement.

BUZZ ALDRIN’S letter reads in part: “This certificate of authenticity certifies that the accompanying Page 3-1/2 from the Apollo 11 Flight Plan, Part No. SKB32100080-350, S/N 101 was flown to the Moon and used aboard the Command Module "Columbia."

On July 16th, 1969, Neil Armstrong, Mike Collins and I lifted off from Pad 39A at the John F. Kennedy Space Center on our journey to perform humankind's first landing on the Moon at the Sea of Tranquility. During our lunar voyage, we were guided by our flight plan, which contained a timeline with instructions as to our tasks during each phase of the mission.

Page 3-1/2 of the Apollo 11 Flight Plan starts with our liftoff to the Moon at 09:32 am EDT. This first page of the Flight Plan represents the launch of the 1st planned crewed landing on the Moon. The page starts the entire flight plan with the word, "LIFTOFF" at 0:00 Ground Elapsed Time (GET). This page represents the beginning of our mission to land on the Moon.

At 00:10 GET (or 10 minutes) into the mission, the page shows the term "SECO" which stands for Second Engine Cut Off. "SECO" means that the final rocket engine boosting us into Space has shut down, and we were on orbit around the Earth (Our SECO was at 11:42 minutes into the flight). Once on orbit, the page shows our first tasks of the trip. As I was in the center couch, my job was to check the command and service modules' (CM/SM) Reaction Control System (RCS) gauges as well as the Caution & Warning Light panel (C&W) to confirm that each system was operational. Mike (Collins) was to move to the Lower Equipment Bay (LEB) to check our Oxygen flow, do a check of our radiator leak check, and to prepare to align our navigation system (IMU). While Mike and I unstowed our Hasselblad 70mm Cameras for use in Earth orbit, Neil (Armstrong) was setting up the 16mm Data Acquisition Camera (DAC or SEQ CAMERA) as well as the ORDEAL (Orbital Rate Display Earth and Lunar) unit. All these chores took place in the first 30 minutes of our time in Earth Orbit.

Approximately 40 minutes after initial liftoff, Mike was to perform a "P52." P52 was a significant realignment of the Inertial Measurement Unit (IMU). By looking at specific stars, we were able to make any corrections to our guidance system that may have occurred due to the vibration and G-forces generated during our ride on the Saturn V into orbit.

On the reverse of the page, page 3-2, shows tasks that we needed to complete to prepare for Trans Lunar Insertion (TLI) and the beginning of our journey out to the Moon.

Our navigation tasks complete, we had to prepare to TLI and Transposition, Docking, and Extraction (TD&E) of the lunar module. Mike finished the P52 and established a State Vector (Spacecraft attitude and direction in Space). We also transferred the State Vector information from the CM "Columbia" to our LM "Eagle" The "Notes" section on the page states that the ground will send us their state vector computation used in the CM and that information transmitted to the LM via a computer command.

We hot fired the RCS to make sure that the maneuvering rockets on the CM functioned properly, put back on our helmets and gloves, tested the Entry Monitoring System (EMS) which would tell us any change in velocity of our spacecraft stack during TLI and TD&E as we flew on our rendezvous with the Moon. As can be seen, we accomplished a lot during our first two hours in Space.

In 2012, Congress allowed Apollo Era astronauts to keep disposable items like the Apollo 11 Flight Plan from their mission as personal mementos. This historic page has remained a treasured part of my private space collection for 50 years, ever since NASA presented it to me after my return from the Moon in 1969.

This Flight Plan page numbered 3-1/2 is one of the few objects used in lunar orbit and is also a rare example of an astronaut flight certified object used on the first landing on the Moon."

See related lot 105, a collection of 20 of the Control Panels used to launch Apollo 11, from the Kennedy Space Center Firing Room 1