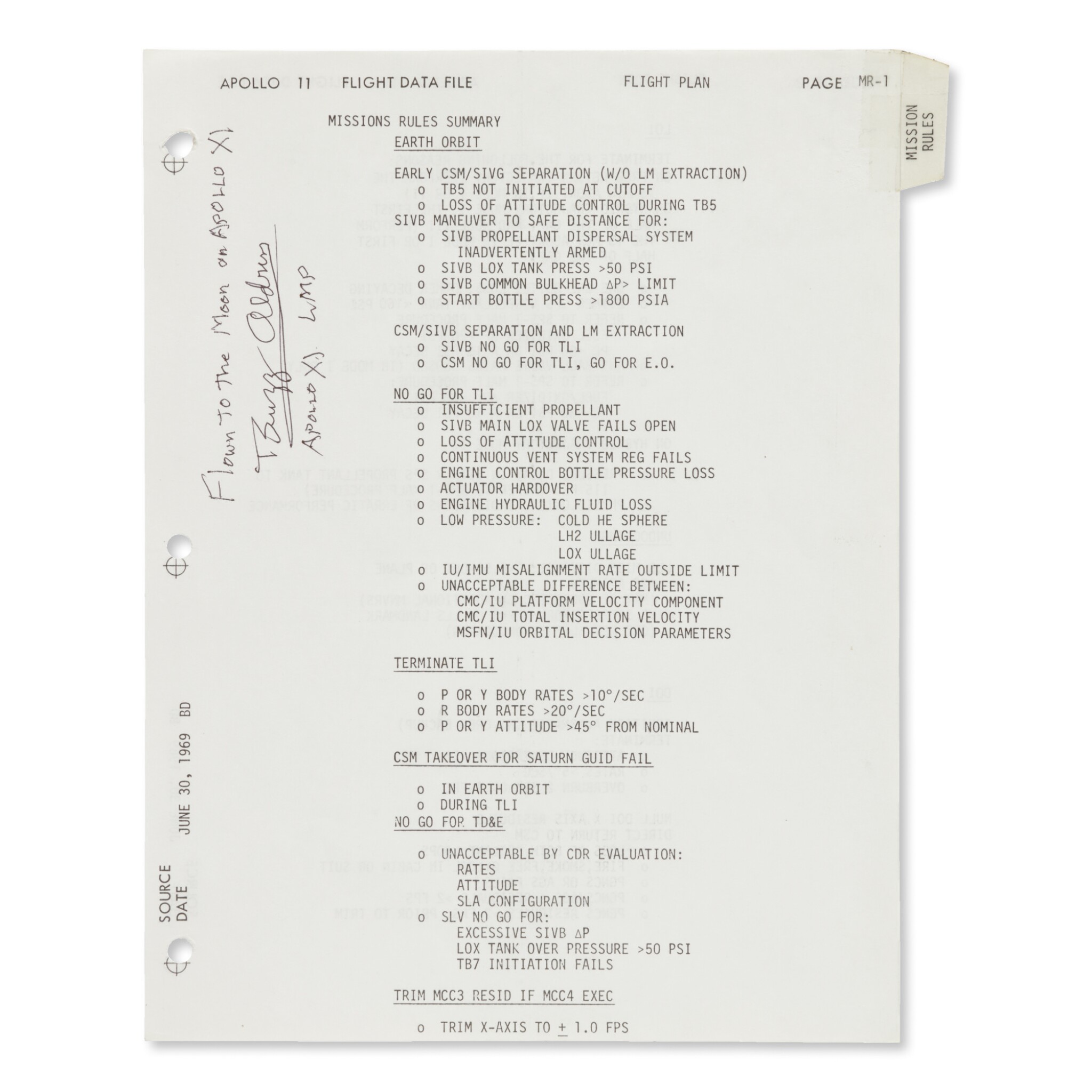 "MISSION RULES SUMMARY" — THE CRUCIAL, LIFE-SAVING RULES TO FOLLOW IN THE EVENT OF A LOSS IN SPACECRAFT FUNCTIONALITY

ONE OF THE MOST CRUCIAL DOCUMENTS ON THE SPACECRAFT — THE MISSION RULES TO BE FOLLOWED IN THE EVENT OF SPACECRAFT MALFUNCTIONS. The Mission Rules were developed to help expedite the crew's decision making process in the event of significant loss of spacecraft functions, providing them with alternate courses of action to follow. Keeping the crew safe was the number one priority, followed by the optimization of the chances of completing the mission objectives. This document would have been crucial in the event of disastrous loss of spacecraft capability, as it would have allowed the crew to decide upon the correct course of action, even under the extreme stress of an emergency situation. A reminder of the deep, strategic planning that went into every aspect of the missions.

BUZZ ALDRIN'S letter reads: "This certificate of authenticity certifies that the accompanying “Mission Rules Summary” pages, MR-1/2 & MR-3/4 from the Apollo 11 Flight Data File, Part #SKB32100080-201, S/N 1001, were flown to the Moon and used aboard the command module "Columbia."

On July 16th, 1969, Neil Armstrong, Mike Collins and I lifted off from Pad 39A at the John F. Kennedy Space Center on our journey to perform humankind's first landing on the Moon at the Sea of Tranquility. As part of the Flight Data File that we carried on the flight, the "Mission Rules Summary" was essential to our decision-making capability in the event of an anomaly in flight.

Briefly, Mission Rules were our procedural definitions which provided us with guidelines to control whether we could continue with our flight, switch to a preplanned alternative mission or return to Earth. The accompanying two leaves were a summary of the critical rules that would determine our next course of action in the event of a failure of equipment at a certain point during the mission.

These four pages summarized the significant segment of flight during our journey to a lunar landing. Each event title is underlined with the reasons behind each decision to terminate the primary mission and either switch to an alternate mission or end the flight, starting with issues that occurred within "EARTH ORBIT."

These pages were our "failsafe" that allowed both Mission Control and the crew to work as a team. Mission Control received spacecraft telemetry and had the expertise and experience to analyze any unusual occurrence aboard the spacecraft. We, as the crew, in the spacecraft and were in a firsthand position to observe the phenomenon. Using the "Mission Rules" allowed us to work together to complete our mission objective of being the first humans to land on the Moon.

These Mission Rules Summary pages numbered MR-1/MR-2 and MR-3/4 are some of the few objects used in lunar orbit and is also a rare example of an astronaut flight certified object used on the first landing on the Moon."