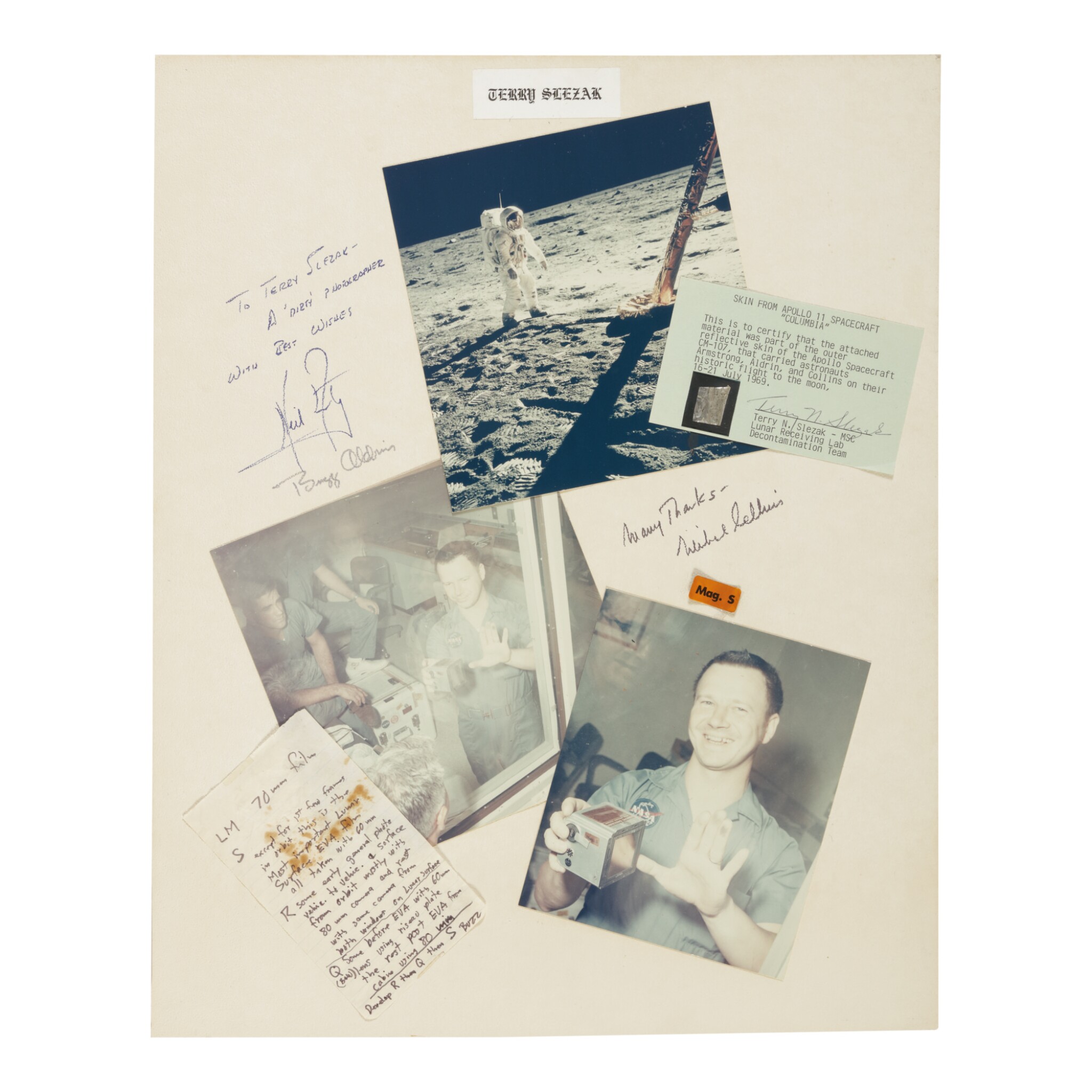 FLOWN TO & USED ON THE LUNAR SURFACE DURING APOLLO 11

1. USED ON THE LUNAR SURFACE. Metal "Mag. S" label (1 by 1 1/2 inches), taken from the left side of the Apollo 11 Lunar Surface Hasselblad 70 mm Film Magazine "S", which was carried out onto the lunar surface in Tranquility Base during Neil Armstrong and Buzz Aldrin's EVA on Apollo 11, and then dropped onto the lunar surface by Neil Armstrong as he loaded equipment back onto the Lunar Module using the Lunar Equipment Conveyor (LEC).

The Apollo 11 lunar surface Hasselblad 70 mm Film Magazine "S" was transferred from NASA to the Smithsonian National Air and Space Museum in 1970, where it is still housed, and can be seen at the following link, clearly missing its leftside "Mag. S" label: https://airandspace.si.edu/collection-objects/film-magazine-hasselblad-70mm-apollo-11-lunar-surface-0. The "Mag. S" label can be seen in-situ, before being removed by the Apollo 11 crew and gifted to Slezak, in item 4 below.

2. WRITTEN ON THE LUNAR SURFACE, Autograph manuscript signed "BUZZ" (5 1/2 by 3 1/2 inches), written in the Lunar Module following he and Armstrong's historic moonwalk, and then stowed along with the magazines in the "70mm Mag" outer decontamination bag, being a description of the contents of the three most important lunar surface film magazines, and stating as regards "Mag. S": "Except for 1st few frames in orbit this is the Most important Lunar Surface EVA film... Develop R then Q then S. Buzz." TO OUR KNOWLEDGE, THIS IS THE FIRST DOCUMENT TO HAVE BEEN ENTIRELY HANDWRITTEN AND SIGNED WHILE ON THE LUNAR SURFACE.

INCREDIBLE LUNAR SURFACE ARTIFACTS FROM APOLLO 11, INCLUDING THE FIRST AUTOGRAPH MANUSCRIPT TO BE WRITTEN ON THE LUNAR SURFACE. A unique presentation gifted from the Apollo 11 Crew to Terry Slezak, the "Dirty Photographer" who later came to be known as "The first man to touch moondust with his bare hands". ITEMS FLOWN TO THE LUNAR SURFACE ARE EXCEPTIONALLY RARE, AND THOSE ITEMS ACTUALLY USED OUT ON THE LUNAR SURFACE EVEN MORE SO. WE KNOW OF NO OTHER DOCUMENTS TO HAVE BEEN ENTIRELY HANDWRITTEN AND SIGNED WHILE ON THE SURFACE OF THE MOON.

After their moonwalk, Neil Armstrong and Buzz Aldrin loaded up the gear that was to come back with them to Earth, including the lunar surface cameras and moon rocks. These items were placed onto a conveyor belt, known as the Lunar Equipment Conveyor (LEC). In the course of doing so, the Hasselblad pack containing Film Magazine "S" fell off the LEC and landed on the lunar surface, becoming covered in moon dust. Armstrong & Aldrin explained the circumstances of this in the Apollo 11 Technical Crew Debriefing:

"Armstrong: Concerning the LEC, I had neglected to lock one of the LEC hooks which normally wouldn't have caused any trouble. ...However, for an unknown reason when I got the SRC [Sample Return Container, i.e. Rock Boxes] about half way up, the Hasselblad pack just fell off... When it fell onto the surface, it was covered with surface material...

Aldrin: Did the film magazine hit the pad or drop right to the surface?

Armstrong: I think it hit the surface clear of the pad, on the right side, which would be the spacecraft's left. I wasn't worried about the contingency sample because that was inside a bag [The Sample Return Bag, sold in these rooms in 2017 for $1.8 million]. If anything was going to catch fire, it was going to be my whole suit because it was just covered in the stuff."

The recipient of this presentation, Terry Slezak, a Manned Spacecraft Center (MSC) photographic technician assigned to the Crew Reception Area (CRA) of the Lunar Receiving Lab (LRL), became, in the course of his duties, the first man to touch moon dust with his bare hands. One of Slezak's duties was to unload and clean the astronauts cameras post flight, sterilize the flown film magazines, and make quick prints of the photographs so that the photos could be checked and explained by the astronauts while the images were still fresh in their minds. When doing so for the Apollo 11 magazines, he opened the outer decontamination bag, and found Buzz Aldrin's note describing the contents of the film magazines inside. When he then removed the plastic seal from "Mag. S," described by Buzz as "the Most Important Lunar Surface EVA Film," he found that moon dust had collected in the film cartridge, and came spilling out, covering his hands with moon dust. Slezak recounted the events in an interview done for the NASA Johnson Space Center Oral History Project:

"...Finally I started unpacking the film, which was double-bagged in plastic containers. Inside of there were the Beta Cloth containers that the film magazines were in, like an ammunition belt. We inventoried these through the window of the biological barrier... And when I came to Magazine S, I opened the Beta Cloth belt, and in there was a note from Buzz Aldrin. He said "This is the magazine that Neil [A. Armstrong] had dropped on the surface, but this was the most important magazine." When I pulled it out it was all covered in this black material - looked like lampblack almost - it was really dark black with little bright speckly things, which turned out to be little bits of glass from the lunar surface. So everybody said 'What is that?' I said, 'It's Moon dust. That's the only place it's been.' So they had to shoot a picture of me with the Moon dust on my hand. Then, according to protocol, the other people in the room had to leave and I had to strip off my clothing and clean off all the work surfaces with Clorox bleach, then go to the showers.... So the next day, I found my picture on the front page of the newspaper. That's how I became the first man in the world to touch the Moon dust!"

To commemorate the event, the crew of Apollo 11 created this presentation as a gift for Slezak. It is very interesting to note that the FLOWN Apollo 11 Data File contained a "Photographic Timeline" (see lot 111) which gave very specific directions on the intended use for each film magazine. It would seem that the reason for Aldrin's present manuscript note is that he and Armstrong seem to have deviated from the Photographic Timeline, as "Mag S", which we now know to contain the most important lunar surface EVA images, was originally intended to take pre-EVA Panoramic pictures through the LM, and that "Mag R" was slated for the Lunar EVA photos. One can only imagine how excited the pair were, so much so that they forgot to switch "Mag S" out for "Mag R" - luckily for all of us, there were still plenty of shots left.

Superior, 2001, lot 821 (sold with piece of scotch tape covered in moon dust, collected by Slezak without authorization from NASA. Tape with moon dust no longer present).