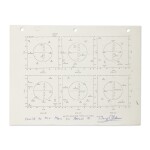 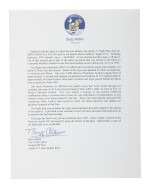 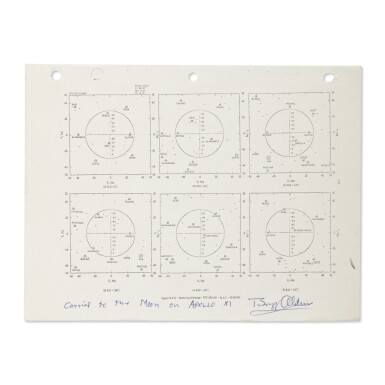 A STAR CHART USED DURING THE FLIGHT

ONE OF THE FEW PRINTED CELESTIAL NAVIGATION AIDS TO BE CARRIED ON THE APOLLO 11 MISSION. This star chart played a key role in ensuring the safety of the Apollo 11 crew, as it allowed them to verify their lunar trajectory and update their guidance computer after their second Mid Course Correction engine burn, putting them on the correct path back home to Earth after their historic first lunar landing.

Our flight plan scheduled a MCC2 of Mid Course Correction engine burn number 2 at about 26 hours into the mission. Burns of this type were planned to refine our trajectory to and from the Moon. This was a SPS (Service Propulsion System) engine burn of approximately 3 seconds and changed our projected pericynthion of 175 nautical miled to approximately 60 nautical miles when both Columbia and Eagle passed behind the Moon prior to going into lunar orbit.

This sheet illustrates six different star pattern views that were visible through our scanning telescope at 26 hours Ground Elapsed Time (GET) while we were in PTC or Passive Thermal Control . PTC was simply a rotation of our docked CSM/LM combination along a common axis to keep an even distribution of temperatures on our vehicles which were being heated by the sun. these start chart patterns allowed Neil Armstrong, Mike Collins, and myself to verify our lunar trajectory and update our guidance computer at that time.

The flight plan was probably the single most important document related to the success of our mission. It provided a time schedule of crew activities and spacecraft maneuvers to accomplish the first lunar landing.

This page has been in my private collection since 1969. I have written: "Carried to the Moon on Apollo XI" and signed it along the bottom of the page..."

Please note the images for lots 121 and 122 were switched in the print catalogue.