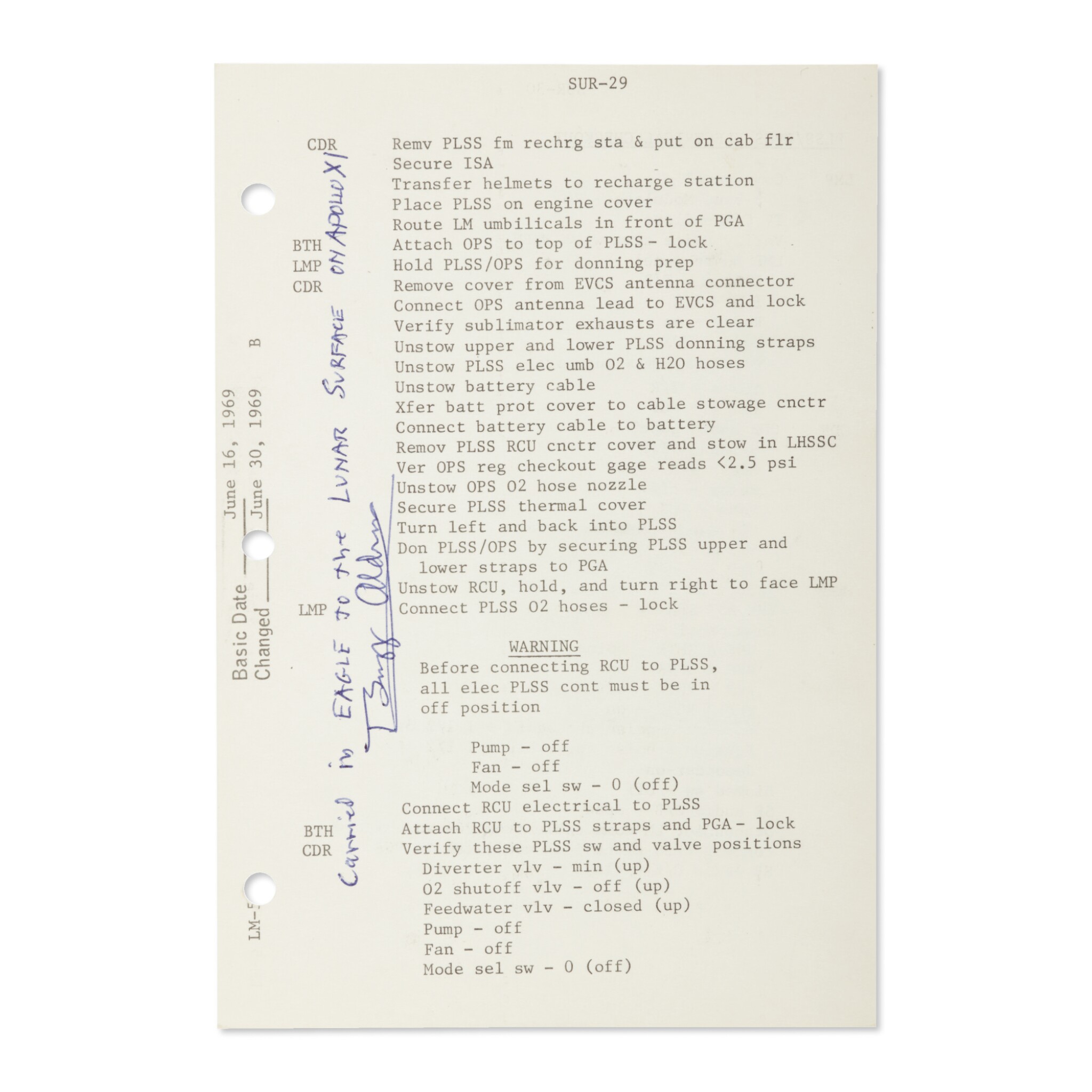 PREPARATIONS TO WALK ON THE MOON

STEP-BY-STEP PROCEDURES TO ALLOW NEIL ARMSTRONG AND BUZZ ALDRIN TO EXIT THE LM AND WALK ON THE MOON. Steps listed on this sheet were performed just minutes before Neil Armstrong descended the ladder on Lunar Module Eagle's front landing strut, becoming the first man to set foot upon the Moon. These steps included space suit preparations, removal of the PLSS (Portable Life Support Systems, or "back-packs") from storage, and securing the PLSS to the spacesuits. The PLSS were an absolutely vital component of the space suit, providing oxygen, water, and cooling for the suits during EVAs (Extra-Vehicular Activities, or Moonwalks).

BUZZ ALDRIN'S SIGNED provenance letter reads: "Accompanying this letter is a sheet numbered SUR-29 and SUR-30 from the Apollo 11 LM Lunar Surface Checklist. The entire checklist was carried to the surface of the Moon in Lunar Module Eagle during the first lunar landing on July 20, 1969.

SUR-29 lists steps that Neil Armstrong (CDR) performed to remove the PLSS (Portable Life Support System) or "back packs" from their storage area. We then placed them on our space suits via donning straps. Each PLSS provided oxygen, power, and cooling for our space suits. We then connected the oxygen and water hoses as well as the RCUs (Remote Control Units).

Side SUR-30 lists the PLSS/EVCS Electrical Checkout procedures. There steps were required to verify proper PLSS and space suit operation prior to exiting the LM. This part of the checklist was the beginning of the step by step procedures to allow Neil and myself to exit the LM and walk on the Moon.

The complete checklist was a vital document to the success of our mission. It provided information on steps required to operate equipment and experiments associated with the first lunar landing.

This sheet has been in my private collection since 1969. I have written on the side SUR-29: "Carried in Eagle to the Lunar Surface on Apollo XI" and signed it along the left side."