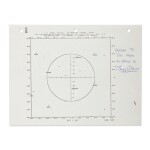 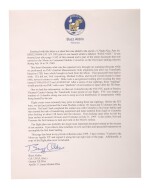 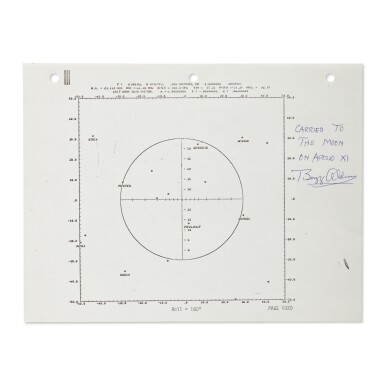 A STAR CHART USED DURING THE FLIGHT

ONE OF THE FEW PRINTED CELESTIAL NAVIGATION AIDS TO BE CARRIED ON THE APOLLO 11 MISSION. This star chart played a key role in ensuring the safety of the Apollo 11 crew, as it was used to verify that they were safely on the way home to Earth after their historic first lunar landing.

BUZZ ALDRIN'S letter reads: "Enclosed with this letter is a sheet that was added to the Apollo 11 Flight Plan, Part No. SKB32100080-350, S/N 1001 prior to our launch, which is labeled: "PAGE 102D." It was inserted just after page 3-102 of this manual and is part of the entire document that was carried to the Moon in Command Module Columbia on the first lunar landing mission during July 16 to 24, 1969.

This sheet illustrates what was the expected view through our scanning telescope while we perform and IMU (Inertial Measurement Unit) alignment just after our TransEarth Injection (TEI) burn which brought us back from the Moon. That spacecraft burn had to work. If it did not, Neil Armstrong, Michael Collins, and myself would remain in lunar orbit, never to return to Earth. Mike took a navigational reading after locating the stars named FOMALHAUT and ACHERNAR. After a series of star sightings, these "readings" would provide our IMU with a new "platform" of our location in space after the TEI burn... The flight plan was probably the single most important document related to the success of our mission. It provided a time schedule of crew activities and spacecraft maneuvers to accomplish the first lunar landing.

This page has been in my private collection since 1969. I have written:" Carried to the Moon on Apollo XI" and signed it along the top right side of the page..."

Please note the images for lots 121 and 122 were switched in the print catalogue.