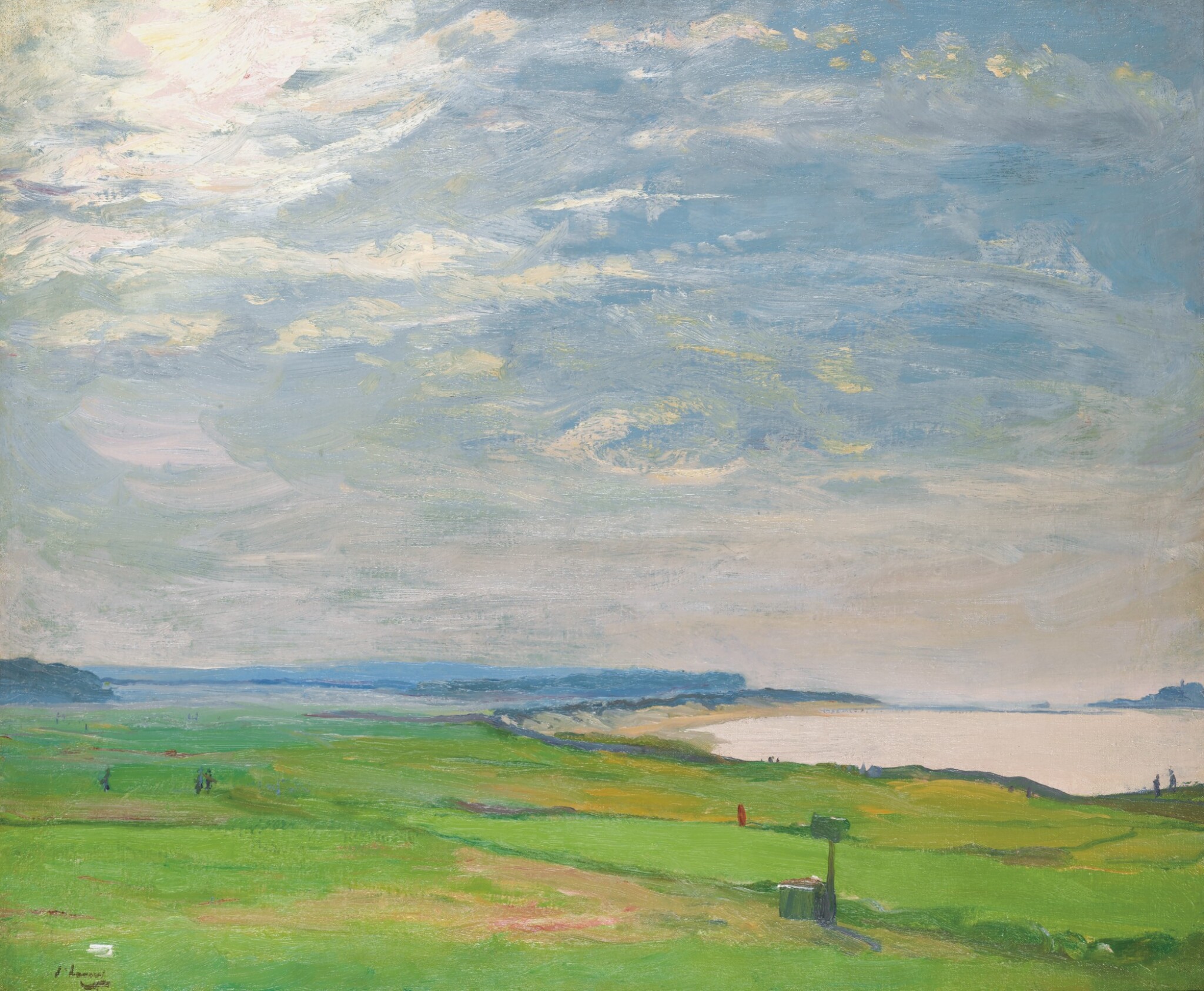 Original canvas. The work appears to be in very good overall condition.

Mrs Blackwood, the artist's grandaughter, by 1946;

Relieved of his duties as a war artist, comfortably established as one of the leading portraitists of his generation, and recently elected a Royal Academician, John Lavery entered the 1920s as a powerful force in art, politics and society. One of his many important patrons in this decade was the enthusiastic advocate for Scottish art and Liberal Unionist MP for Edinburgh North, Sir Patrick Ford. Among other painters Ford supported such as Francis Campbell Boileau Cadell, Patrick William Adam and Mary Cameron, Lavery developed a lively friendship with the politician in the years following the war. The setting for this burgeoning camaraderie was Ford’s magnificent villa at Westerdunes, whither Lavery accepted regular invitations to enjoy a heady mixture of sport, politics and painting in splendid surroundings. Built in 1908 on the outskirts of North Berwick overlooking the sea and the offshore island known as ‘the Lamb’, and the ninth hole of the famous North Berwick Golf Course, Ford’s villa just twenty-five miles from Edinburgh afforded Lavery a base from which to venture out to paint the striking vistas of the East Lothian coast.

An inevitable feature of Lavery’s visits were the excursions to play at the distinguished and dramatically situated courses of North Berwick. Frequented by the fashionable and famous, members included the likes of the Prime Minister, Arthur James Balfour, who played rounds even while in office with visiting dignitaries staying nearby at his estate at Whittinghame. Lavery enjoyed many an energetic game at the club with his wife Hazel and step-daughter Alice Trudeau, alongside Ford and various political friends. By most accounts the artist was an indifferent golfer. Alice recalled him as being a ‘seriously competitive’ player, ‘impatient and always in a hurry’, who treated golf like ‘dismounted polo’ (quoted in McConkey, 2014, p.59, note 29). Lavery himself delighted in the muttered assessment of a Scots caddie that he was ‘not much of a golfer’. When this was repeated to an Irish counterpart some years later, a wry response came back – ‘Ah, sir, there are very few men can play like you’. (Lavery 1941, pp.182-3).

Whatever Lavery lacked in sporting ability he more than made up for in his efforts to capture the blustery, sweeping prospects off the Links. Rather than opting for a more finished and formal production, Lavery’s landscapes replicate the sketch-like technique of his famous society portraits, drawing attention to the workings of the paint brush. The bright, harmonious palette and expansive sky give the painting a feeling of space, concomitant with a sense of ease that resonates in the confident and free handling of the brush work.

Between 1921 and 1922 Lavery painted a number of views of North Berwick, recording the changes of sea and sky as carefully as the fortunes of his sporting companions. Around fifteen paintings of the golf course have been identified, including a version comparable to the present work that currently resides in the Tate Collection. Both works look out across the bay from a small hillock used for teeing off; beyond, the coastline curves round into the approaches of the Firth of Forth, with the island of Fidra just visible on the extreme right. But whereas in the Tate version the tide is out, and the hills of Fife are visible through the clear air, in North Berwick No. 3 the calm sea laps at the edge of the course, the sky filled with hazy cloud subtly illuminated by the silvery sunset light.