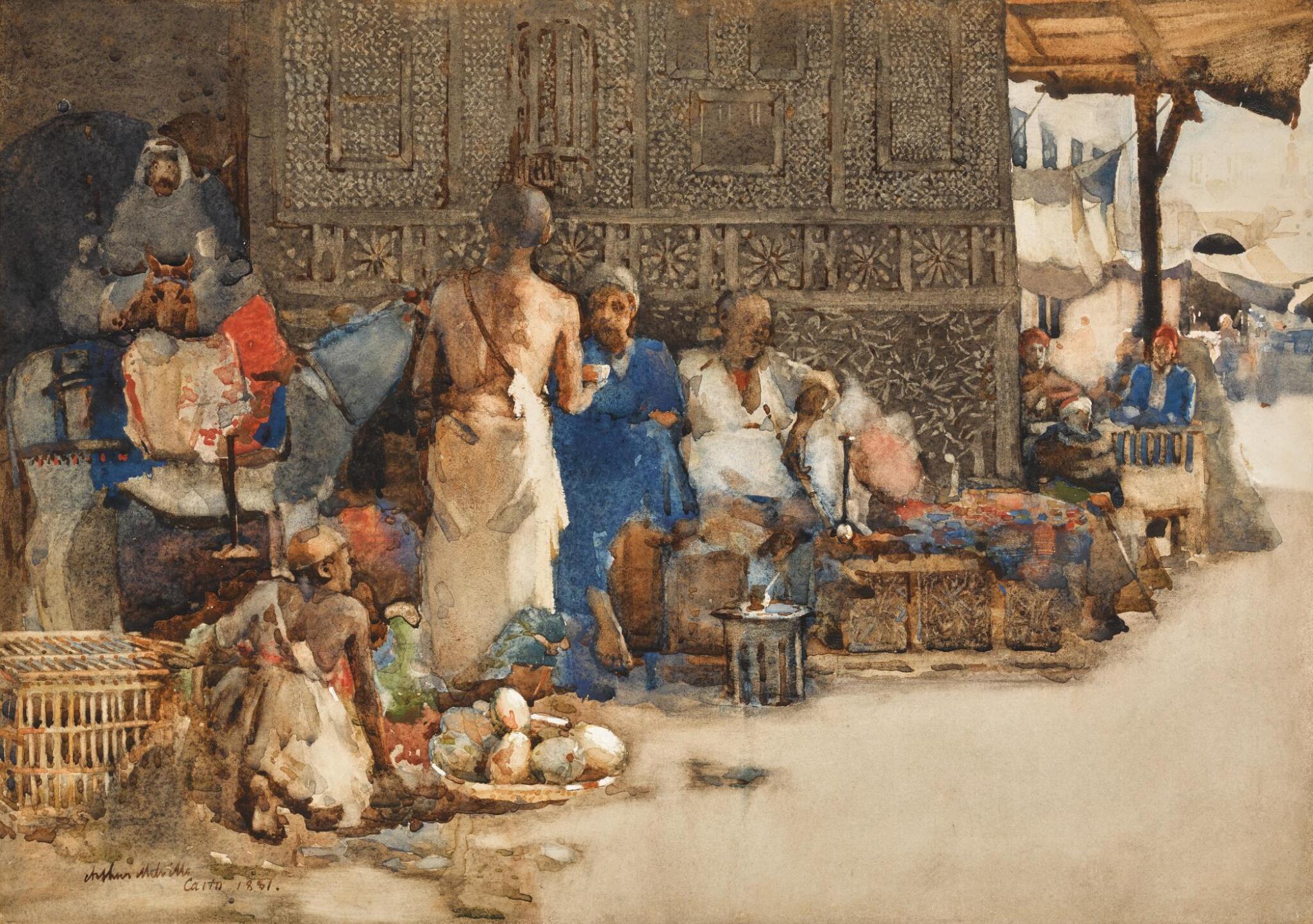 This work has not been laid down. The sheet is hinged to the mount with two pieces of acid-free tape verso. The sheet undulates slightly. The work is in excellent overall condition and strong colour.

Held in a simple gilt frame and cream mount. Under glass. Please note that this work has been examined out of its frame.

Bonhams, Edinburgh, 7 December 2007, lot 53, where purchased by the present owner

Edinburgh, Royal Scottish Academy, 1882, no.722, listed as A Cairo coffee-house;

London, Royal Institute of Painters in Watercolours, Exhibition of Collected works of Arthur Melville, 1906, no.123

One measure of a talented artist is the ability to work in different environments, and in this respect few come close to the wide-ranging career of Arthur Melville. The striking epithet of ‘artist-adventurer’ is no exaggeration for the revolutionary watercolourist, whose remarkable travels took him from Angus to Venice, Barbizon to Baghdad, Glasgow to Granada. In Autumn 1881 Melville journeyed to Cairo intending to stay in the east for two months; captivated by the intense light and colourful chaos, his painting kept him there for two years.

The present work is an accomplished example of Melville’s great innovation: the watercolour fusion of Impressionism and realism. Cairo’s severe brightness and the ‘absolutely suffocating’ heat which Melville complained of in letters home is palpable. Listless men press themselves against the shade of an intricately latticed wall, looking out with curiosity towards the Scot suffering en plein air before them. Melville’s mastery of the medium is evident as much in the rich blues and reds that punctuate the dun and dusty surfaces as in his assiduous handling of detail: the exposed backs of the attendants, the lethargic arm suspending the pipe, the steam rising from the dainty coffee pot.

A Cairo Coffee Stall was originally acquired by one of Melville’s principal early supporters, the leather goods manufacturer John Tullis. The owner of three Egyptian works, Tullis was one of several important patrons with trade interests abroad – undeterred by the scarcity of contemporary Orientalist works exhibited in Scotland – who esteemed Melville’s vivid eastern compositions. Today noteworthy examples of Melville’s skilful handling of Cairo’s light and life, from the busy movement of A Cairo Street (1883) to the deep, soft shadows of An Arab Interior (1881), can be found in important collections such as the Fleming-Wyfold Foundation and the Scottish National Gallery respectivley.

We are gratefull to Professor Kenneth McConkey for his kind assistance with the cataloguing of the present lot.