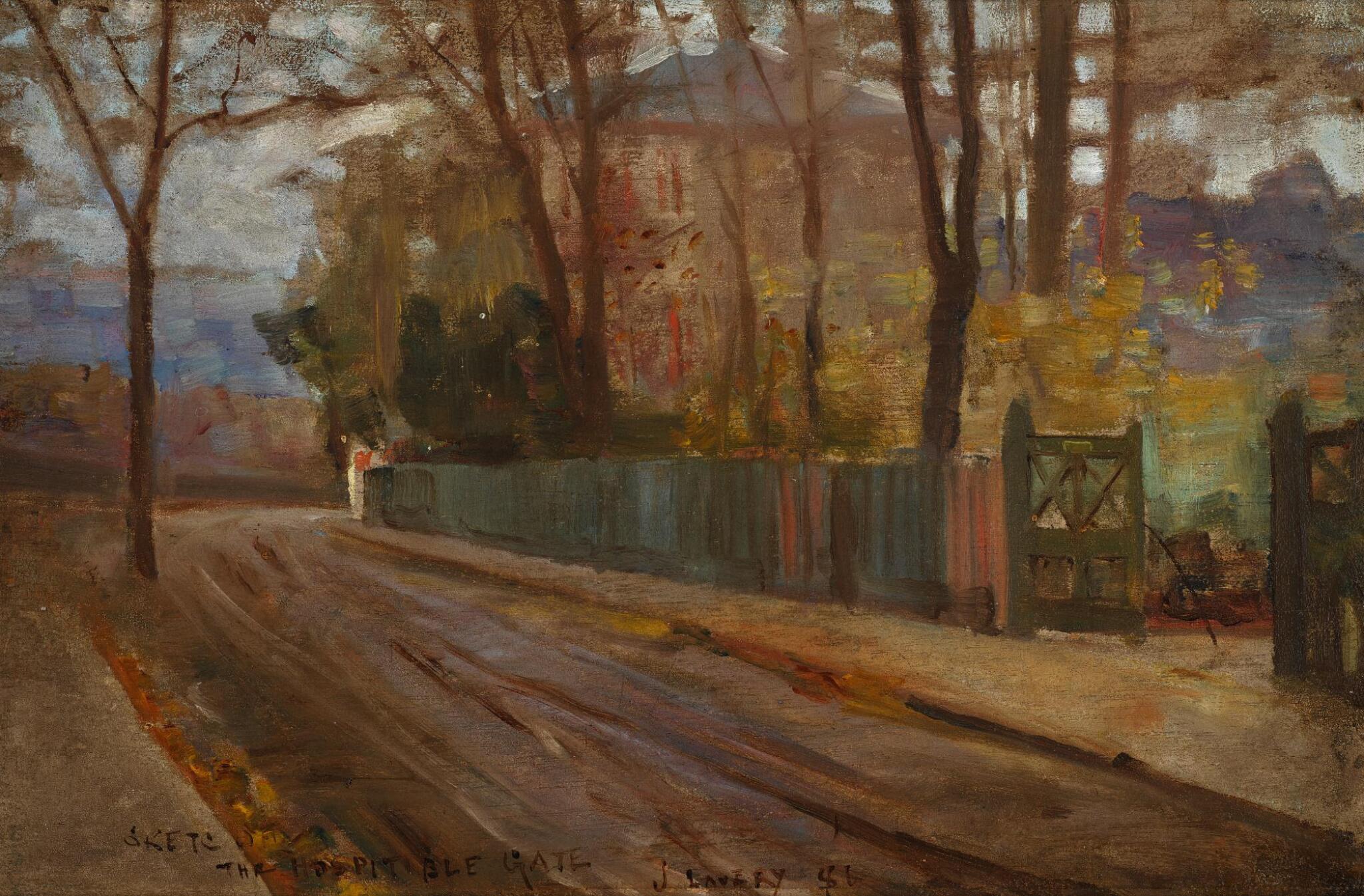 SKETCH OF THE HOSPITABLE GATE

The panel is in sound order and providing a stable support. The work appears to be in vey good overall condition.

Examination under ultraviolet light reveals retouching to the lower framing edge with some spots of retouching to the road and beneath the gate to the centre right of the composition. Some minor scattered spots elsewhere.

John Lavery was lionized by collectors in Paisley after his return from France at the end of 1884. They were impressed by avant-garde ambitions expressed in large canvases such as On the Loing, An Afternoon Chat, (Ulster Museum, Belfast), shown at the Glasgow Institute of Fine Arts in February 1885. Although he established a studio in Glasgow, these wealthy middle-class local worthies were keen to retain his services. The wool and cotton manufacturer, James Fulton, for instance, offered Lavery a cottage/studio, close to his baronial mansion in his estate at The Glen, Paisley, while the artist produced portraits of members of his family. William MacKean, a soap manufacturer and the town’s Provost also provided portrait commissions and some of these are likely to have been shown at the artist’s first solo exhibition at the George A. Clark Town Hall at the end of November 1886. This was grand edifice was funded four years earlier by the Clark family, owners of Anchor Mills, one of Paisley’s principal employers, who were also Lavery patrons.

Sadly, no catalogue for Lavery’s first show has survived, even though he advertised it as ‘Portraits, Pictures & Sketches painted in the Neighbourhood’. We may however assume that in addition to views of The Glen, and smaller pictures painted in the garden of the MacBrides’ house at nearby Cathcart, where Lavery had worked on his most famous canvas, The Tennis Party, (Aberdeen Art Gallery), the exhibition also contained sketches like that of the ‘Hospitable Gate’. An earlier street scene, Lady on a Safety Tricycle 1885, (Government Art Collection), is however thought to be an entrance to Cartbank. This tentative watercolour lacks the bold handling, vivid realization and atmospheric qualities of Sketch of The Hospitable Gate.

The swift notation and autumnal palette of this suburban street scene indicates that it was painted shortly before Lavery’s exhibition opened. Although there is little detail of the house, it is possible that it represents Chapel House in Ardgowan Street, Paisley - then on the fringe of the Blackhall estate and the river White Cart Water. In the 1880s this four-square Georgian house on a leafy lane, was owned by James Clark, one of the brothers who inherited Anchor Mills. The building’s square façade, its placing in relation to the street, and the shallow pitch to its roof, suggests that the ‘hospitable gate’ could give on to just such a house.

We are grateful to Professor Kenneth McConkey for preparing this catalogue note.