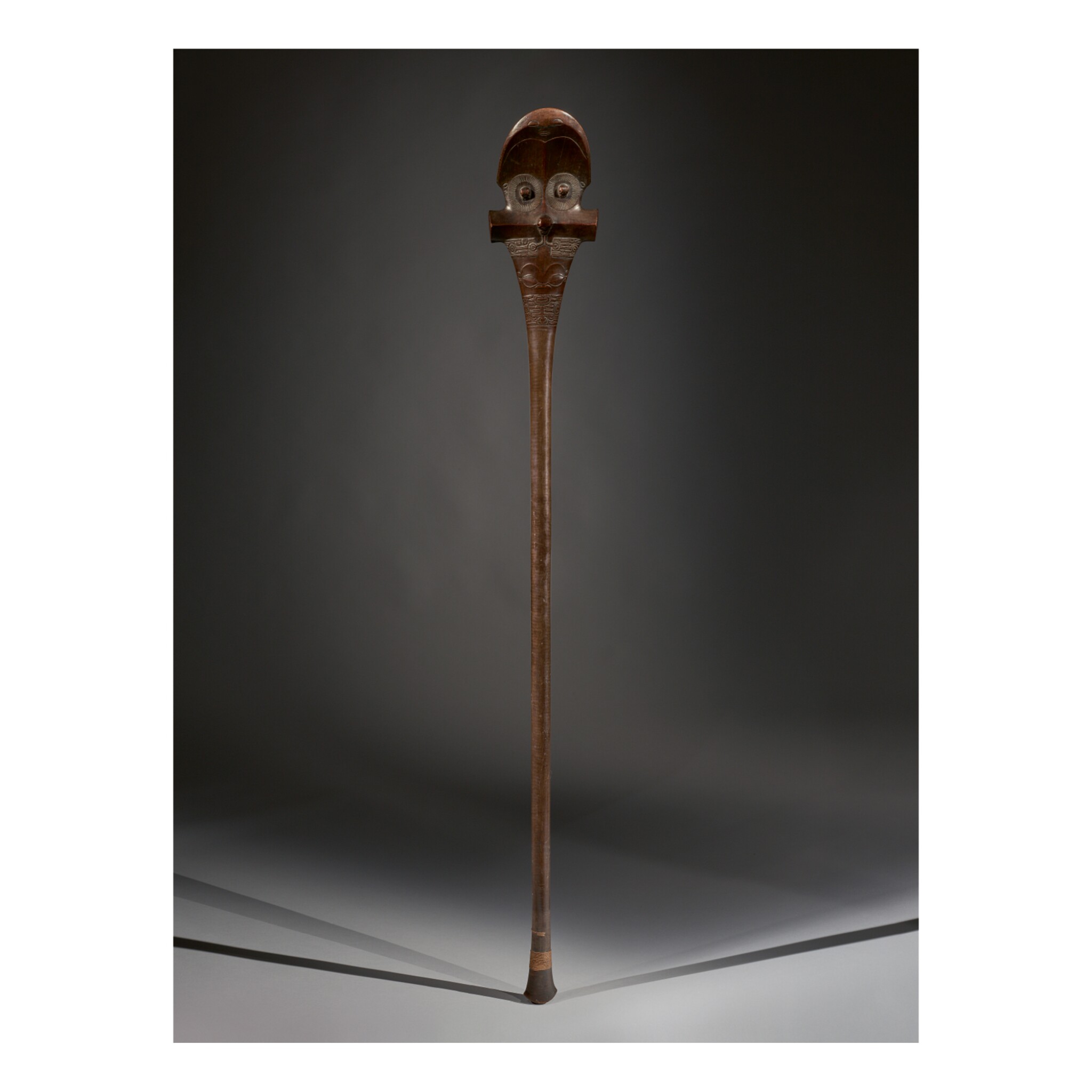 Harry A. Franklin, Beverly Hills, acquired at the above auction

It is to this rarefied category of objects that this ‘u‘u belongs. Chosen to illustrate its type in "Primitivism" in 20th Century Art: Affinity of the Tribal and the Modern, William Rubin’s historic exhibition at the Museum of Modern Art, this ‘u‘u is unequivocally one of the greatest examples of the long-celebrated corpus of Marquesan war clubs.

Carol S. Ivory, the scholar of Marquesan art, notes that “warfare was an integral part of Marquesan life”[1], whether as the result of territorial rivalries or because of the need to obtain redress for perceived slights, insults, or humiliation. Important warriors were, therefore, amongst the most influential and high-ranking members of Marquesan society, and their most prized possession and emblem was an ‘u‘u. These large, heavy, and exquisitely decorated clubs were carved from ironwood (Casuarina equisetifolia), known to the Marquesans at toa, which is also the Marquesan word for warrior [2].

The great distinguishing feature of all ‘u‘u is the janiform head of the club, which is covered in an array of small heads and faces. These are arranged in such a way that together they form a larger face, a sort of visual "pun", in which the eyes and nose are made of small heads. Whilst motifs based on heads and faces have an exceptionally long history in Polynesia, dating back to the Lapita cultural complex, they undoubtedly reached their artistic pinnacle in the form of the ‘u‘u. Considering the faces within faces of an ‘u‘u, one may wonder if it was one of these clubs which Gauguin had in mind when he wrote that the basis of all Marquesan art was "the face, above all else the face […] always the same and nevertheless never the same”[3].

The array of faces on an ‘u‘u held many layers of meaning. First, we should note that the Marquesans held the head to be the most sacred, or tapu part of the body, as the site of a person’s mana, or spiritual power. Also important is that the Marquesans call both the face and the eyes mata, and that this word has great genealogical significance. Ivory notes that “the recitation of an individual’s genealogy was referred to as matatetau, literally ‘to count or recite (tetau) faces/eyes (mata)’ […and] the term mata ‘enana (face/eye people) refers to one’s relatives, ancestors, or allies […] Thus, the symbolic relationship between images of the face or eye and an individual’s ancestry – and, by extension, the sacred power of the ancestors – begins to become apparent”[4].

The purpose of the ‘u‘u was to render its owner powerful and invulnerable. As a heavy war club it served this purpose in a very literal sense, but as Ivory’s remarks make clear, it unquestionably had great spiritual power too, as a vessel for ancestral mana. The anthropologist Alfred Gell has made a similar suggestion, noting his belief that in the Marquesas Islands all imagery, whether carved or tattooed, is a vehicle for etua (gods, or deified ancestors) “in a tutelary […] guardian mode”[5]. The imagery on the club does not “represent” etua, figuratively or abstractly, but rather it constitutes their protective presence within the object itself. Considering these theories, and the traditional belief in the Marquesas Islands that it was sacrilege to approach a chief or warrior from behind, it seems probable that the multiplicity of faces on an ‘u‘u were intended in part to represent the all-seeing and watchful character of the ancestors.

Whilst all ‘u‘u are composed of a series of faces, no two are the same. Here the artist, or tuhuka, has produced a work of exquisite balance, in which the exceptional fineness of the high and low relief carving is matched by the superb shape, which is at once delicate in its details and powerful in its overall form. The head is exquisitely proportioned, and of astonishing depth and volume, particularly clear when seen in profile. Whilst both faces of the club are, of course, essentially abstract in design, the surfaces are modelled with a subtlety and sensitivity which seems to bring them to life, with concave and convex surfaces flowing fluently from one to the other. On either side, just below the top of the club’s perfectly arched head, appears the first smaller face, its features finely incised across the gently undulating surface. Below it is the crisply defined browline, which at its centre flows into a delicate vertical rim that runs down between the two largest eyes, the principal pair, which are formed by two small heads carved in high relief. Each head, or “eye”, is surrounded by a circle of finely carved striated lines which recall Marquesan tattoo patterns. Two smaller faces appear in the slight space between the outer edges of these striated lines and the curved outline of the face. Very similar in conception to the faces which appear at the top of the club, these two ethereal little faces have an eye on either face of the club. Tiny yet watchful, they ensure that an ancestor faces out in all four cardinal directions.

Below the principal eyes there is a crossbar, bisected by a horizontal rim, which flares subtly outwards at either end. At its very centre, where the vertical and horizontal rims meet, another small head appears. These heads, one on either side, are larger than those which form the eyes. Each has a tiny pair of hands held up to its chin. The arms and hands emerge from a panel of finely carved panels composed of abstract motifs. These four panels, two on either side, are all the same size, but each is unique in the disposition of its motifs. Beneath these panels of carving there appears a face, carved with the greatest delicacy. The artist has created the brow of this face by very subtly varying the depth of the surface, forming a line which is subtle yet well defined. Similarly delicate lines run diagonally across the eyes, flowing at either end into the sinuous and crisply defined outline of the nose and eyes, and the curlicue flourishes at their outer edge.

Interestingly the bands of carving which appears beneath this on either side are essentially mirror images of each other, with only the slightest differences. These bands contain the motifs known as ipu, the Marquesan word for a container, whether it be a bowl, cup, shell, or skull. The appearance of the ipu may be another of those puns which so delighted the Marquesans since the ‘u‘u was itself a container for the mana of the ancestors, and of the great warrior who owned it.

2 Samuel H. Elbert notes that "In Marquesan, intangibles are named for visible things [...] Heroic or manly is iron-wood tree (toa), the toughness and strength of which is proverbial." (Elbert, "Chants and Love Songs of the Marquesas Islands, French Oceania", The Journal of the Polynesian Society, Vol. 50, No. 198, 1941, p. 55