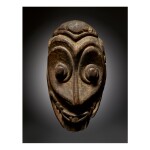 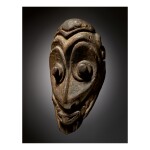 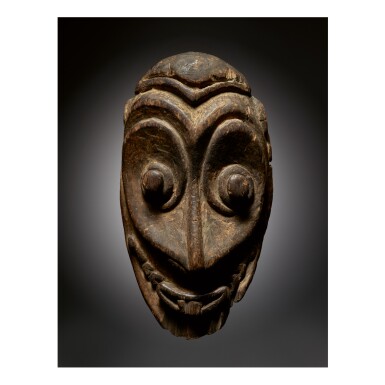 A MASK FROM A WAR CANOE

Like the facades of the houses in neighboring middle Sepik river villages, canoes were painted and decorated in numerous ways. Requisite modes of quotidian transportation on the river and on the lakes that formed from them, large canoes were critical during inter-village conflicts and battle. Able to carry numerous warriors to battle, the appearance of the vessel was as important as its functionality. In many middle Sepik river villages and neighboring areas such as Chambri Lakes, war canoes were decorated at the front with so-called masks made of a W-shaped armature of cane and painted sago palm leaf spathe on which a small wood and painted carving of a face was attached. According to Dirk Smidt, the shape of the support resembles a bird as it lands on the canoe. This mythical bird symbolizes the fighting force of the whole clan. These masks may also have had another function and attached to a mask costume (Smidt in Kooten and van den Heuvel, eds., Sculptuur uit Afrika en Oceanië, Otterlo, 1990, pp. 251-252). Similar in form to the much larger gable masks seen on ceremonial houses, the canoe masks without pierced holes for eyes, had a similar function, to create alarm and great fear to the approaching enemy. A similar form can be seen in the example collected in 1925 in the Ethnologisches Museum Berlin (inv. no. VI 42458), illustrated on the cover of Heinz Kelm’s 1966 work Kunst vom Sepik I. The protruding tongue, fierce eyes and powerful pigment sent a clear and menacing message to their adversaries that the ensuing events would not end well for them.