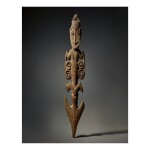 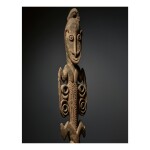 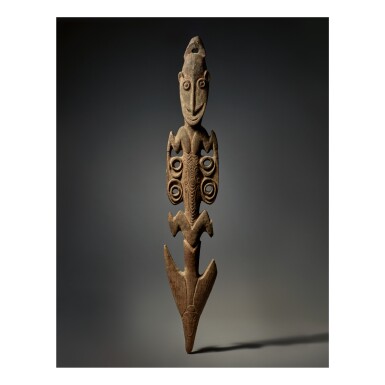 This fine suspension hook very clearly relates to an important group of sculptures which were once in the Dambwibit men’s house in the Sawos hamlet of Wolombi, in the village of Yamök. The group includes an ancestor figure named Malabi, once owned by Harry Franklin and now in the collection of the Dallas Museum of Art (inv. no. 1974.5.McD; see Pitman, ed., Dallas Museum of Art: A Guide to the Collection, Dallas, 2012, pp. 124-125). Malabi was collected for Franklin from Yamök by Bruce Lawes in around 1956, and it seems probable that the present suspension hook was collected at the same time and in the same context. An important figure of the founding ancestor Tulalamun was collected from Yamök by Lawes at the same date; it is now in the collection of the Papua New Guinea National Museum and Art Gallery, Port Moresby (inv. no. E.361.1; see Howarth, Myth and Magic, Canberra, 2015, pp. 190-191).

The attribution of this suspension hook to Yamök is further supported by its clear resemblance to the ancestor figure named Kurubu, which was collected by the Swiss anthropologist Alfred Bühler from the Dambwibit men’s house on July 14, 1959. The figure is now in the Museum der Kulturen, Basel (inv. no. Vb 17703; see Peltier, Schindlbeck, and Kaufmann, eds., Sepik. Arts de Papouasie-Nouvelle-Guinée, Paris, 2015, pp. 186-187, cat. no. 69).