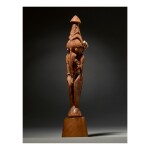 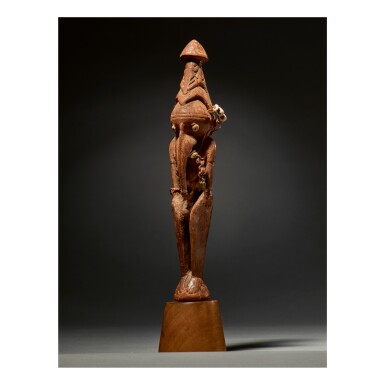 Very good condition for an object of this type and age. General marks, nicks, scratches and abrasions consistent with age and use. A hole drilled in the underside for mounting. Fiber attachments are dry and fragile. Very fine glossy reddish-brown patina with crusty remains of red earthen pigment. Inventory number "146-QM-P" painted inside proper right leg. "146-QM-P" painted in black ink on the underside along with "E.2505" painted in another hand in red.

Harry A. Franklin, Beverly Hills, acquired from the above by exchange in April, 1962

The rigorously structured composition of this exceptional amulet figure plays with volume and negative space, and its strong, vertical forms convey a great sense of energy. The characteristic form of the nose is particularly well developed, and the pierced septum retains its plaited fiber and shell adornments. The sculptor has paid particular attention to several small details, such as the carving of the hands and feet - the vertical form of the latter contribute to the figure's almost leaping appearance - and to the carving of a small cleft which separates the buttocks from the upper thigh. A small quadruped wriggles its way down the conical headdress, which is pierced at the top for suspension.

For two closely related examples from the collections formed in the 1920s by the Surrealists André Breton and Paul Eluard see Friede, ed., New Guinea Art: Masterpieces from the Jolika Collection of Marcia and John Friede, San Francisco, 2005, vol. 1, p. 94, cat. nos. 68 and 69.