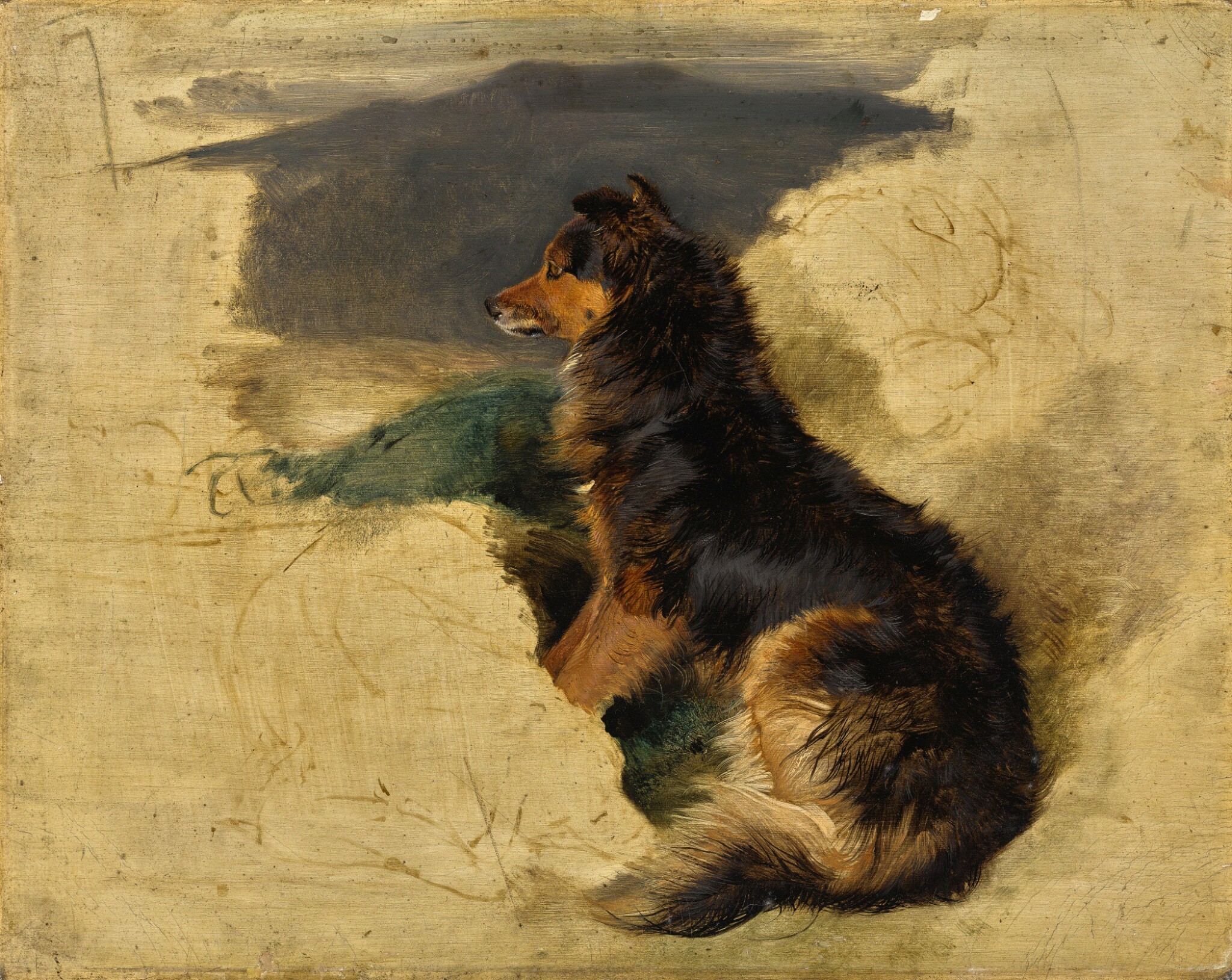 Study of a Scotch Collie (recto);

Study of William Russell with a falcon and a hound (verso)

Study of a dog

There is an unfinished portrait of a man and his dog to the reverse.

The millboard support has compromised corners with separating layers.

All the corners show radial stress cracking, a result of forceful bending of the board. There is some vulnerable raised paint to these areas, as a result, and some recent paint loss.

Unsympathetic repairs and infilling of the paint loss has been undertaken.

The repairs and damage are confined to the background solely. The image of the dog is in a very good preserved original state.

The fine details, particularly to the depiction of the fur, is in very good condition and the colours are strong and saturate well.

Removal of a discoloured varnish would improve the overall tonality.

This exceptionally well preserved and freely handled sketch of a Scotch Collie is one of a number of early oil sketches, drawings and écorché studies of animals that were bought from Landseer’s studio sale by the amateur artist Charles Mansel Lewis (1845–1931). Painted rapidly, with confident and assured brushstrokes, it demonstrates the artist’s instinctive feel for the sheen of animal fur as well as his natural sympathy for their innate dignity. Together with his intrinsic understanding of anatomy, it was this quality that made Landseer the most brilliant animal painter of the nineteenth century. On the reverse of the board is a sketch of William Russell holding a falcon, with a hound, which relates to a similar but more fully realised portrait of Russell with a hawk and hound formerly in the collection of Henry P. McIlhenny.1 Russell and his father, Lord William Russell, brother of the 6th Duke of Bedford were both intimate friends of the artist and sporting associates.

The Scotch Collie is a landrace breed originating from the highland regions of Scotland, descending originally from a combination of ancient Roman Cattle Dogs, Native Celtic breeds and Viking Herding Spitzes. In the Highlands of Landseer's day they were used extensively in rural areas for herding sheep and other farm animals, as well as guarding the homestead and hunting. In the 19th and early 20th centuries a large number of these dogs were imported to America to assist immigrant families in maintaining their new farms.

The six-day sale of the contents of Landseer’s studio, including paintings, drawings, prints and books, was held at Christie’s in May 1874 and attracted widespread interest, with strong competition from collectors and dealers alike for the over 1,400 lots on offer. Mansel Lewis had cultivated his interest in art whilst at Oxford University where he befriended the Slade Professor of Art, William Rivière, whose work he later collected, together with that of his son, Briton Rivière. In 1874 he inherited the Stradey estate in South Wales, where he swiftly constructed an artist’s studio at the top of a tower with windows looking out onto the Bristol Channel, where he could paint by the soft Carmarthen light. At about this time he also met and became a lifelong friend and patron of Hubert von Herkomer. A sportsman himself, Mansel Lewis obviously felt an affinity with Landseer’s sporting scenes: his deer hounds, dead stags, hawks and sporting dogs, as well as his studies of animals and rural life. As a painter himself, however, he was also clearly intrigued by the process of Landseer’s art, particularly these didactic studies through which he had mastered his craft and trained his eye.