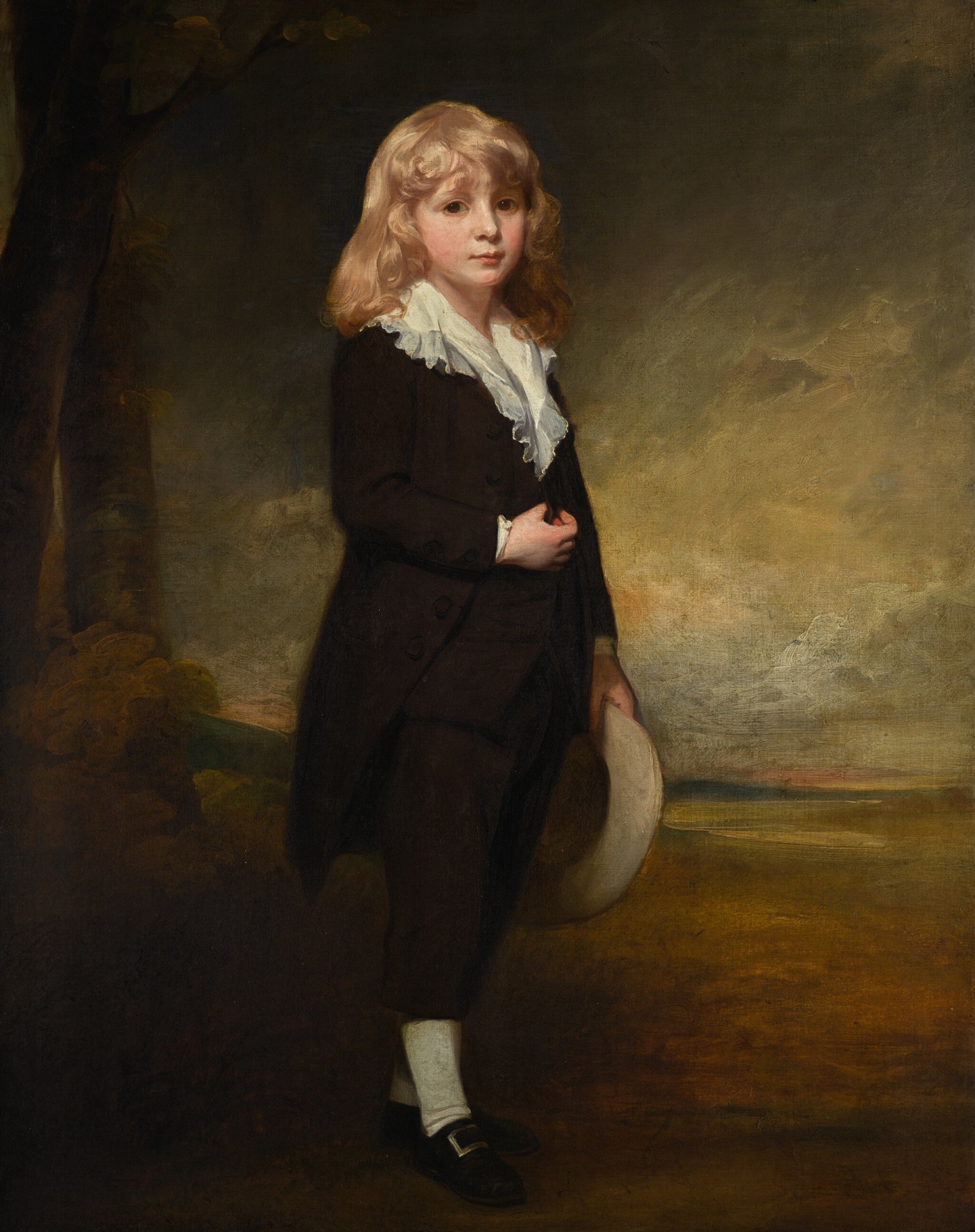 oil on canvas, in its original frame

Oil on canvas, in a period gilt frame with minor losses.

The original canvas has been heavily wax/resin lined, the surface is stable and secure but the lining imparts an inertness to the painting.

The canvas has lost tension and undulations across the surface can be detected in raking light.

The paint is stable and secure and in a good original condition.

Minor repaired loss can be detected to the sky, mid right, and discoloured restoration is visible around the boy's head down to the shoulder. This appears to be more about mitigating a natural thinness, or penumbra, around the head than loss or damage.

The raised paint texture, particularly to the highlights and the white collar and hair, are very well preserved.

Minor natural shrinkage cracking can be noted in the darker passages and there is a small amount of abraded paint, to left, revealing canvas texture beneath.

Underneath the degraded and discoloured varnish( removed to the figure only in an 'artistic clean") unadulterated bravura brushstrokes can be seen. Removal of the remains of the varnish would significantly improve the overall tonality and reveal colours that are strong and subtleties of intact original composition.

By whom bequeathed to his cousin George Edward Briscoe Eyre (1840–1922), great-great-grandfather of the present owner.

London, Grafton Galleries, Exhibition of a special selection from the works by George Romney, Summer 1900, no. 52;

This sensitive, romantic image of the seven-year-old heir to Sir Joseph Mawbey was painted by Romney in 1779. This was during the period of seven years following his trip to Italy in 1775 when the artist was at the height of his powers and when he painted his greatest masterpieces. Notable amongst these were The Gower Children, 1777 (Abbot Hall Art Gallery, Kendall), Miss Bettesworth, 1778 (National Museums, Liverpool, Sudeley House), Mrs Trevor, 1779 (Carnegie Institute of Art, Pittsburgh), and Mrs Maxwell, 1780 (formerly at Lee Priory). This portrait of Master Mawbey shares with these a spontaneity and confidence which was, in Alex Kidson's words, ‘to propel [Romney] to the height of fashion as a society portrait painter’.1

Joseph Mawbey was the son and heir of the Leicestershire-born Joseph Mawbey and his wife Elizabeth Pratt. His father was a notable political figure, serving as MP for Southwark (1775–90) and for Surrey (1775–90). He was a supporter of Rockingham who recommended his creation as baronet in 1765, and he later became a loyal friend of the celebrated radical John Wilkes. Mawbey inherited property in Surrey from his uncle, and in 1763 bought the estate of Botleys in that county, building there an imposing Palladian mansion where this portrait would have hung. The young Joseph inherited the baronetcy on the death of his father in 1798. A friend and neighbour of Charles James Fox, he continued to live at Botleys. On 9 August 1796 he married Charlotte, daughter and co-heir of Thomas Henchman of Littleton. On his death, much of his property passed to his daughter Anna Maria, who married John Ivatt Briscoe in 1819, shortly after her father's death. Briscoe was a very active MP until his death in 1870. He bought the estate of Foxhills in Surrey where the architect George Basevi designed for him a substantial house and where this portrait hung.

Sir Ellis Waterhouse remarked of Romney that ‘he is at his best with people in the bloom of youth and health with fine clothes and fine looks’.2 Romney had a great ability to capture the character and spirit of children, and the years following his return from Italy saw a succession of particularly fine images of children, notably John Wharton Tempest, 1779–1780 (Museu de Arte de Sao Paulo) and The Stanley Children, 1780–81 (Earl of Derby). This portrait of Master Mawbey stands comparison with the best of these. As with the boys in those portraits Master Mawbey is informally dressed as was the fashion of the times for children, with a prominent white ruffled collar, his striking blond hair falling freely over his shoulders. The composition has echoes of Van Dyck's portraits of children.

The portrait has remained with the descendants of the sitter and has never appeared on the market. It is in its original frame by Robert Ansell, for which Sir Joseph Mawbey paid six guineas in October 1780. Romney took great interest in the framing of his pictures, and Robert Ansell was one of his favourite framers, who produced around forty frames for the artist in the late 1770s and early 1780s.