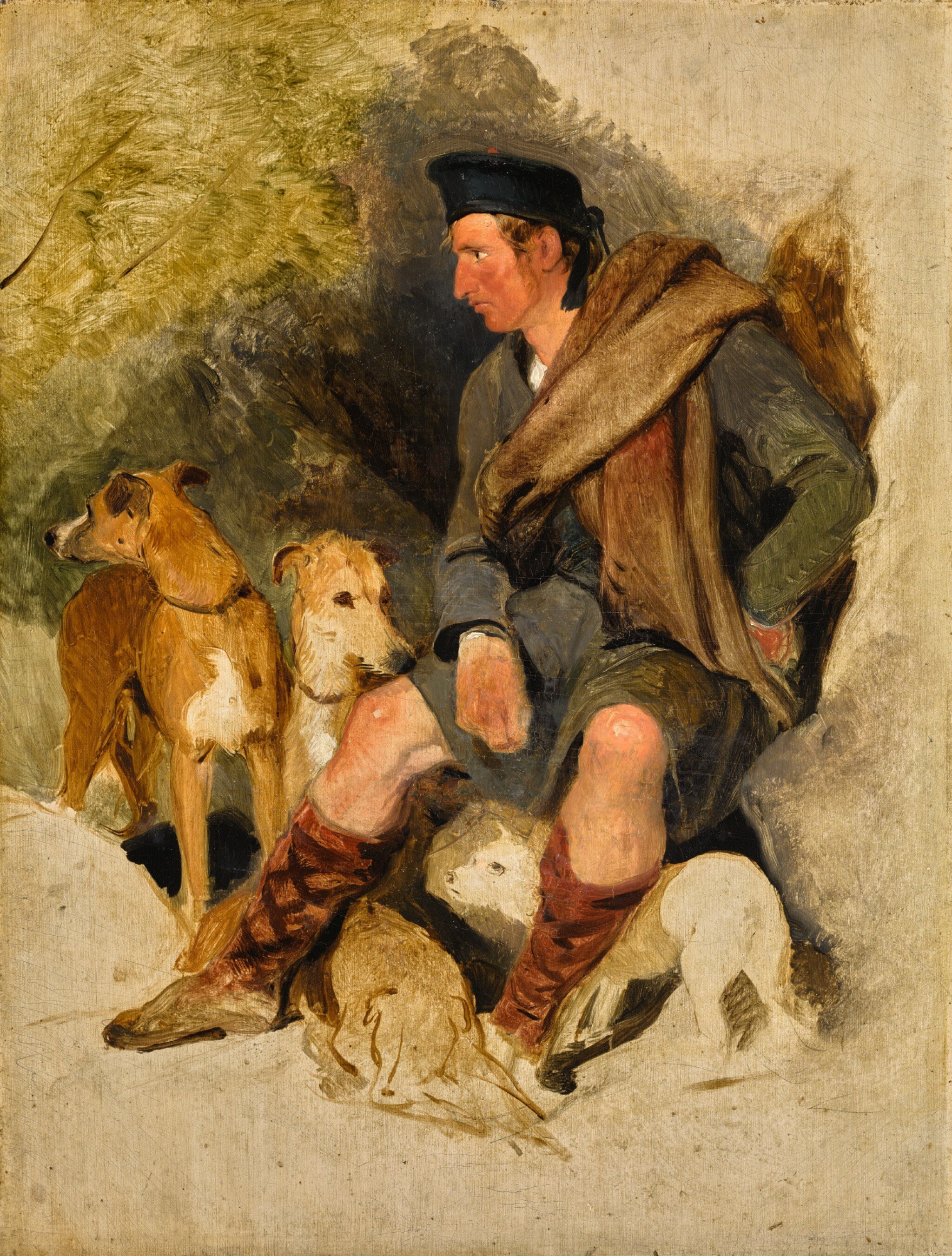 A Highland ghillie with two deerhounds and a terrier

The board is flat and stable. The varnish is even but rather dirty and has discoloured over time. There is a distinctive craquelure visible in raking light. Some of the more pronounced craquelure (above the ghillie's sporran and in the background to his right) has formed some minor tenting that may require attention. Otherwise there are only a few surface scuffs, and no major visible damages. Both the underdrawing and the loose handling of the paint are well preserved.

Inspection under ultra violet light reveals only a few minor scattered retouchings, and one repaired damage that runs from the back of the ghillie's right knee horizontally through his left knee. This old damage also encompasses the back of his hand, and runs down into his left shin and sock. This damage appears to be well restored and is not clearly visible to the naked eye.

Offered in a gilt carved wood and gesso 19th century English frame which is in good condition, with only a few chips and losses.

This beautiful sketch of a Highland ghillie with his dogs is probably one of a series of studies of Highlanders and Highland life that Landseer painted in the 1820s and 1830s, a period when he was spending a lot of time staying with the Duchess of Bedford in the remote valley of Glenfeshie. A keen sportsman who spent a great deal of time in the Highlands of Scotland, Landseer was deeply impressed by the character and resourcefulness of the keepers and ghillies with whom he stalked. They feature in many of his sketches from this period and are characterised by a hardiness which reflects the rugged wilderness in which they lived.

As in his history paintings and sporting groups, Landseer’s image of the Highlander reflects the influence of his great friend Sir Walter Scott. Like the characters in Scott’s novels, he depicts them through the picturesque prism of a primitive people leading a simple life in close communion with the land and the animal world. As Richard Ormond has written, they are presented as a race apart, with their own culture and mores, tougher and more resourceful than their southern cousins and untainted by the corrupting influence of modern industrialisation and materialism.1 Having spent most of the eighteenth century being represented as something to be feared, the image of the Highlander was undergoing a transformation in the early nineteenth century, and Landseer’s imagery stirred the romantic imagination of his audience. His Highlanders and their dogs stand for loyalty, sturdy self-reliance, physical hardiness and courage, as expressed in the firm countenance and steady gaze of the ghillie in this sketch, the artist sympathetically capturing his humanity and self-respect.

This exceptionally well-preserved painting is one of a number of early oil sketches, drawings and écorché studies that were bought from Landseer’s studio sale by the amateur artist Charles Mansel Lewis (1845–1931). Mansel Lewis clearly felt an affinity with Landseer’s sporting scenes, his deer hounds, dead stags, hawks and sporting dogs, as well as his studies of animals and rural life. As a painter himself, however, he was also clearly intrigued by the process of Landseer’s art and drawn to the didactic studies through which he had mastered his craft and trained his eye. This wonderfully evocative study has remained in the possession of Mansel Lewis's descendants at Stradey Castle in Llanelly, Wales, and has not been on the market since it left the artist's studio.