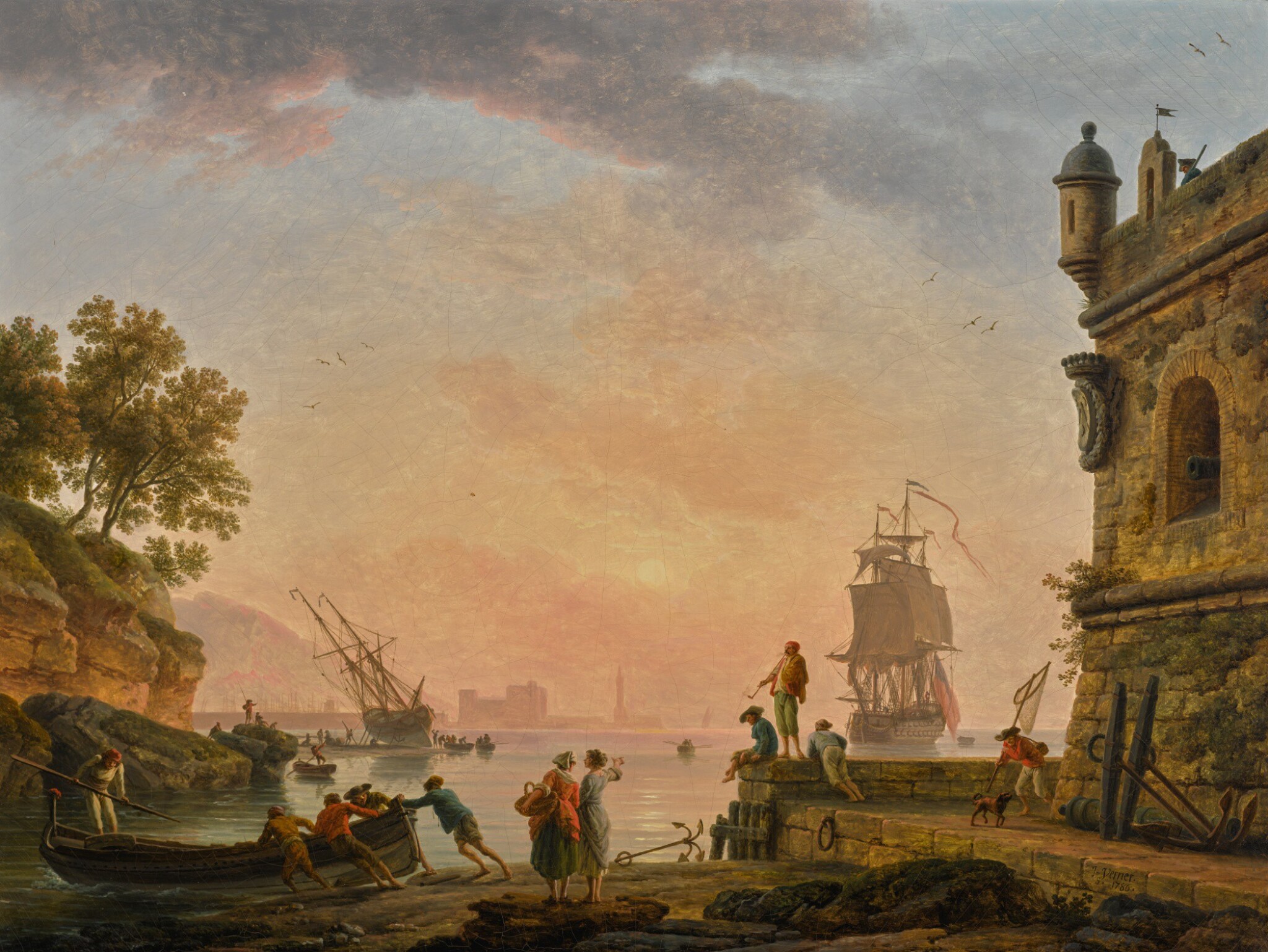 A Mediterranean harbour scene at sunset, with fishermen pushing off a rowing boat beside a fortress, a British warship beyond

Oil on canvas, in a gilt frame with some minor losses

It wasn't possible to remove the painting from its frame but the assumption is that the original canvas is unlined and on its original stretcher.

The paint surface is raised throughout with potential of vulnerability in some areas. There is one very minor paint loss in the sky upper left.

The painting is in excellent original condition, all the fine details and subtle nuances are perfectly preserved.

There is the remains of an old varnish on and around the signature, lower right.

The painting has been recently cleaned and no further tonal improvement can be gained.

Commissioned from the artist by the dealer, Jean Baptiste Pierre Lebrun, May 1785;

This Mediterranean harbour scene – in beautiful condition, the canvas unlined – is one of Vernet’s last dated works, its commission by the Comte de Vaudreuil as a pendant to a work already in his collection recorded by the artist in his 'livre de raison'. The painting was exhibited at the Salon of 1787, where it inspired an anonymous panegyric to both artist – 'peintre sublime' – and patron – described as a modern-day Maecenas, his efforts responsible for the development of French art of the eighteenth century.1

Although the size of the painting and its subject – 'un coucher de soleil' – were prescribed, Vernet was free to invent his composition within these specifications. The artist has chosen to frame the sunset, characteristically, with a view from the shore, comprising a fortress on the right, a tree-topped bank on the left, and two ships in the middle-distance either side of the setting sun, beneath which, along the horizon, run a harbour and the hazy silhouettes of masts and more fortifications. The glow of the early evening sun permeates the entire composition, radiating from the centre of the canvas to bathe the whole scene in warm iridescence, ranging from the pinks and purples of the distance, to the cooler tones of the gently rippling sea, to the rich colours of the figures’ costumes in the foreground. Vernet must undoubtedly have purchased quite an assortment of pigments from the 'marchand de couleur' to which he refers in his journal from the 1 August 1785 (see Literature).

Vernet was of course renowned for his Mediterranean harbour scenes following the most important commission of his career, the Ports of France, a vastly ambitious project initiated by Abel-François Poisson de Vandières (1727–1781), later Marquis de Marigny and Directeur des Bâtiments, for King Louis XV. Between 1753 and 1765 Vernet completed 15 of a probable 24 intended oversize topographical views of all the major military and commercial seaports in France.

Although the present harbour scene is imaginary, it is typical of Vernet’s propensity to depict more-or-less contemporary, realistic views, unlike some of the more overtly classical landscapes of artists such as Hubert Robert. Here, the gentle sunlight complements the peaceable atmosphere apparent in the foreground, where Vernet has pictured incidental details and figures engaged in a variety of activities, which serve to add visual interest to the composition while in no way detracting from the overall impression of the vista. Two women converse while a group of men push a rowing boat afloat, their bare calves visibly showing the strain of the endeavour; on the right, a man with a fishing net glances side-long at the dog purposefully trotting away from him, and a man in Ottoman dress surveys the scene, serenely puffing smoke from a long pipe. Vernet introduces similar exotic figures in other paintings, notably in his views of Marseilles, where their presence is indicative of the international trade operating from the port.

Joseph-Hyacinthe-François de Paule de Rigaud, comte de Vaudreuil (1740–1817) was one of the leading courtier-collectors of Louis XVI's reign and was Elisabeth Louise Vigée Lebrun’s most important private patron, and rumoured lover.2 He owned several of her works, including the artist’s Self-Portrait with a Straw Hat,3 and she painted at least five likenesses of the count himself, including the portrait in the Virginia Museum of Fine Arts, Richmond (fig. 1). Like Vigée Lebrun, Vaudreuil fled France at the beginning of the French Revolution; indeed, the courtier’s grand and lavish lifestyle has sometimes been cited as one of the many catalysts for the uprising.

Vaudreuil began collecting Old Master paintings in 1779, and quickly came to rely on the guidance of the most successful Parisian art dealer of the eighteenth century, Jean Baptiste Pierre Lebrun (1748–1813) – married to Elisabeth Vigée Lebrun – who advised a number of other ambitious office-holders at court. By 1784 Vaudreuil had formed a collection that Luc-Vincent Thiéry’s almanac described as being made up of a ‘beau choix de toutes les écoles’.4

In November of that year, Vaudreuil sold his Dutch and Flemish seventeenth-century paintings at auction, thirty-six of which were acquired by the Crown for more than 250,000 livres – constituting one of the most significant additions to the French Royal Collection of the time.5 He then turned his attention almost exclusively to French art of the seventeenth and eighteenth centuries, his interest in contemporary painters encouraged by Lebrun husband and wife. His taste was wide-ranging: from Poussin’s Bacchanal before a Herm (National Gallery, London), to Watteau’s Plaisirs du Bal (Dulwich Picture Gallery, London), Louis Le Nain’s The Forge (Musée du Louvre, Paris) and decorative still lives by Gérard van Spaendonck. He came to assemble a thoroughly comprehensive and patriotic survey of national art, described in 1787 as ‘composée de Tableaux des meilleurs Maitres de l’Ecole Françoise, qui puisse […] faire honneur à notre nation’.6

Vaudreuil had previously acquired an earlier example of Vernet's work – his Storm with Shipwreck of 1754 (Wallace Collection, London) – but its (larger) dimensions exclude the possibility that this was the intended pendant for the present painting. Having purchased and commissioned more than eighty paintings of the ‘Ecole Françoise ancienne et moderne’, often for record sums, Vaudreuil was finally forced by bankruptcy to sell his collection at auction in November 1787 (see Provenance), the present canvas among six paintings by Vernet.

2 In Thomas Blaikie’s diary entry of March 1783, he describes Vigée Le Brun as the ‘fameuse painteresse [...] the Mistress of the Compt de Vaudreull [sic]’; see T. Blaikie, Diary of a Scotch Gardener at the French Court at the End of the Eighteenth Century, F. Birrell (ed.), London 1931, p. 180.

3 Private collection, Switzerland; an autograph copy is in the National Gallery, London, inv. no. NG1653.