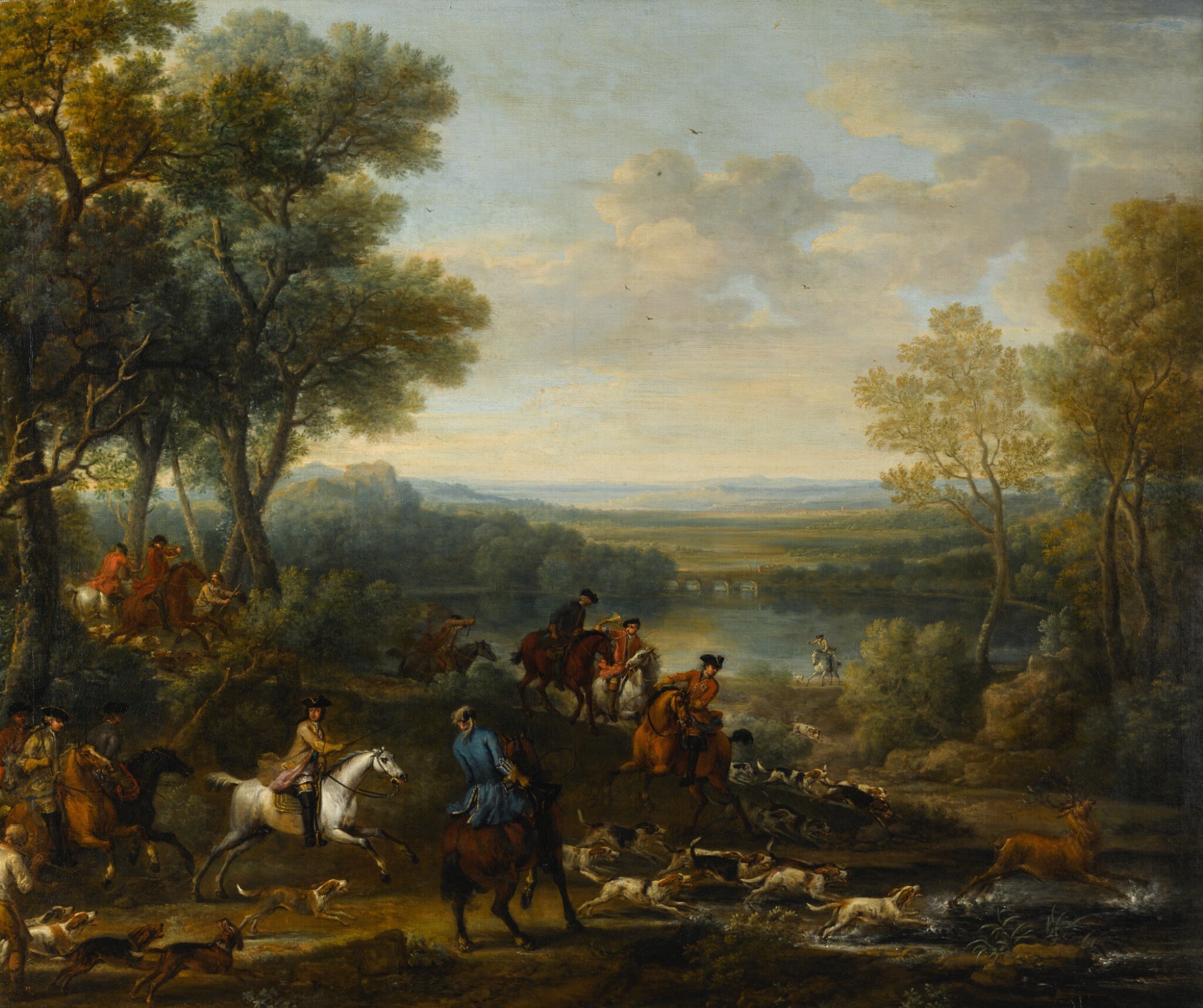 Oil on canvas, in a period Maratta frame in good condition.

The original canvas is lined, the lining is 80-100 years old, the tacking edge has degraded and there is a loss of tension across the picture plane. There is a prominent vertical stretcher mark and two further raised parallel vertical ridges.

In raking light the paint layer appears raised and vulnerable in some areas.

The paint layer is in very good original condition.

The paint texture is well preserved and fine details within the foliage the figures and the animals are intact, including the signature.

The colours are strong and saturate well.

Subtle nuances of tone within the receding landscape are well preserved.

There is little evidence of any prior restoration intervention.

The varnish is discoloured and its removal would improve the overall tonality.

Probably Simon, 1st Earl Harcourt (1714–77), British Ambassador to Paris, Lord Lieutenant of Ireland and governor to the Prince of Wales, later King George III (1738–1820), and certainly recorded at Nuneham Courtney, in Oxfordshire, by 1806;

From whom acquired by the the present owners.

H. Walpole and J. Reynolds, Description of Nuneham-Courtenay in the County of Oxford, Oxford 1806, p. 10 (listed hanging in the Ante Room);

John Wootton (1682–1764) was the leading sporting and landscape painter in England in the first half of the eighteenth century. Responsible for making English landscape painting a credible and popular genre in itself, he paved the way for subsequent artists such as Richard Wilson, Thomas Gainsborough, J.M.W. Turner and John Constable who transformed the genre into one of the greatest achievements of British art. This large-scale hunting piece relates closely to the important series of grand cycles that Wootton painted for his most esteemed aristocratic patrons, many of which remain in the houses for which they were painted today. Rightly regarded as the finest sporting artist of his generation, nowhere is Wootton’s mastery and versatility shown to better effect than in these great hunting scenes. Underpinned by the stoic ideals found in seventeenth-century classical antecedents, brilliantly adapted by Wootton for the demands of the Augustan age, they represent some of the artist’s finest and most original work. First recorded at Nuneham Courtenay in the very early nineteenth century, it was probably acquired by Simon Harcourt, 1st Earl Harcourt, who built the house in the 1750s to designs by the architect Stiff Leadbetter and amassed the majority of the paintings there.

In 1735 Lord Harcourt was appointed Lord of the Bedchamber to King George II, whom he served at the Battle of Dettingen. During the Jacobite Rebellion of 1745 Harcourt was one of thirteen peers commissioned to raise a regiment in the service of the Crown, for which he was granted an Earldom, and in 1751 he succeeded Lord North as governor to the young Prince George, later King George III. The friendship formed between the young Prince and his governor proved to be a close and lasting one, and in 1761 Harcourt was appointed special Ambassador to the Duchy Mecklenburg-Stelitz to negotiate the marriage between Princess Charlotte Sophia and the new King. Harcourt escorted the new Queen to England in September that year and his daughter, Lady Elizabeth, served as bridesmaid at the Royal wedding. In 1768 he was appointed British Ambassador to Paris and in 1772 succeeded the unpopular Lord Townshend as Lord Lieutenant of Ireland. Given the strength of Harcourt’s connection to the Crown, it seems possible that this painting was a gift from a member of the Royal Family, perhaps even the King, and we know from Horace Walpole that the Earl was passionate about hunting.

John Wootton received his training under John Wyck (1652–1702), the Dutch landscapist. The influence of Wyck and other Dutch painters of the late seventeenth century, such as Dirk Maas, is quite evident in the artist’s landscapes, seen in the highly classicised and Italianate views which are typical of his work. It is considered unlikely that Wootton ever visited Italy himself and the warm tonality of his paintings takes its inspiration from the established Dutch vedutisti of the seventeenth century. Both Wyck and Maas had enjoyed the patronage of William III and had produced several large paintings for the King, such as the former’s portrait of William at the Battle of the Boyne, painted circa 1690–95 (Government Art Collection). William’s reputation as the defender of the Protestant faith and the successful challenger to Louis XIV of France’s aggressive expansionism ensured his popularity in England through much of the eighteenth century. In this image, painted almost 30 years after William's death, Wootton has even appropriated him for Georgian England, depicting him in contemporary dress.

Amidst his military campaigns the King found time to indulge his passion for the hunt; dispatching six ships of horses and hounds from England whilst campaigning in the Netherlands against the French. His death in 1702 resulted from an accident while hunting at Hampton Court, when he was thrown from his favourite mount, Sorrel. The King’s passion for hunting closely aligned with the interests of many of Wootton’s most powerful patrons which made scenes like this incredibly popular within aristocratic collections. Arline Meyer has suggested several versions of this composition were produced, owing to the frequency with which this subject appears in eighteenth-century auction catalogues.1

Whereas many sporting and landscape artists revelled in the visceral details of the pack in full cry and the moment of the kill, Wootton invariably underplays this violence and his idealised landscape of a tranquil lake edged by trees charmingly relaxes the frenetic intensity of the action in the foreground. Wootton has framed the composition with high trees on both sides and staggered further visual devices throughout the distance as repoussoirs, leading the viewer to move beyond the hunting to the Claudian landscape beyond.

Wootton was regarded by his contemporaries as without rival as a sporting artist, and he enjoyed a network of patronage that seems to have been unaffected by family or party loyalties. His Royal benefactors included George II and his estranged son, Frederick, Prince of Wales. Sir Robert Walpole, who commissioned him for paintings to decorate the walls of both Houghton Hall and Downing Street, was as happy to patronise the artist as were members of the Opposition, whilst Walpole's son, Horace, not usually known for agreeing with his father on such matters, thought his work of 'very capital manner', admiring the way 'he both drew and coloured with consummate skill, fire and truth'.2 The younger Walpole was even moved to comment that Wootton's landscapes 'approached towards Gaspar Poussin and sometimes imitated happily the glow of Claude Lorrain'. This remarkable reputation was attested to by George Vertue, who noted that the artist 'was in great vogue & favour with many persons of ye greatest quality'.3 Included among Wootton's most notable patrons were the Dukes of Beaufort, Devonshire, Newcastle and Bedford, as well as the Dukes of Bolton, Rutland, Richmond and Leeds, the munificent Edward Harley, 2nd Duke of Oxford, who commissioned numerous pictures for Wimpole Hall, and the influential banker, Henry Hoare, at Stourhead.