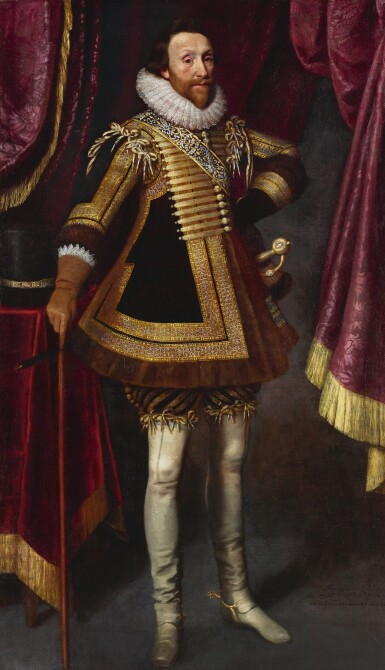 MICHIEL JANSZ. VAN MIEREVELT | Portrait of James Hay, 1st Earl of Carlisle (1580–1636), full-length, wearing an embroidered doublet, his hat on a table beside him

MICHIEL JANSZ. VAN MIEREVELT | Portrait of James Hay, 1st Earl of Carlisle (1580–1636), full-length, wearing an embroidered doublet, his hat on a table beside him

Portrait of James Hay, 1st Earl of Carlisle (1580–1636), full-length, wearing an embroidered doublet, his hat on a table beside him

The canvas is lined, and the paint surface is relatively clean with a slighty discoloured varnish. There is a slight degree of wear visible throughout, but no major damages are visible to the naked eye. Restoration is visible through a 15 cm. high section along the lower margin from to the right of the sitter’s stick to the lower right corner, possibly constituting an insert into the canvas. Inspection under ultraviolet light reveals retouchings scattered along all four margins, and to the aforementioned thick band along the lower margin. There are further retouchings scattered throughout unsurprisingly for a canvas of this size. More notable areas include: a horizontal band of retouching to a possible repaired tear upper left in the curtain to the left of his shoulder measuring approx. 20 cm., and to another area beside this 2 x 3 cm. There are also some concentrated patches in the lower half of his coat, the largest of which measures approx. 5 x 6 cm. The sitter’s face appears to remain largely untouched, with only some small, concentrated patches of retouching in his forehead and eyelid, and pin-prick retouchings in his beard. The painting presents well and appears ready to hang in its current state.

By descent to his grandson John, who married Margaret Longueville;

By descent to their daughter Charlotte, who married Richard Mostyn in 1687;

Thence to his daughter and co-heir, Charlotte, who married Richard Williams of Pendebw, Denbigh;

By descent in the Wynne family;

'He left behind him the reputation of a very fine gentleman and a most accomplished courtier' – so wrote Clarendon about James Hay, one of James I's favourites and a consummate diplomat, but also again in Clarendon's words 'a man of the greatest expense in his person of any in the age he lived.'1

The son of Sir James Hay of Kingask and Margaret Murray, James Hay was educated in France. On his return he attracted the attention of James I as 'a person well qualified by his breeding in France and by study in human learning.'2 He came south with the new king, was appointed Gentleman of the Bedchamber and was knighted. In 1606 he was created baron and the king also made the introduction of Honora, daughter of Sir Edward Denny, whom Hay married in 1607. At the same time the king paid off the debts of his extravagant friend and in 1610 made him Knight of Bath. After Honora's death in 1614, Hay married in the king's presence, though without her father's consent, Lucy, daughter of Henry Percy, 9th Earl of Northumberland, in 1617.

Hay's good nature made him an obvious choice for various diplomatic missions. In 1616 he was sent to France to ask for Princess Christina's hand for Prince Charles, though the conditions attached to the request inevitably led to the mission's failure. In 1618 he was created Viscount Doncaster, and in 1619 the king sent him on an important mission to Germany to stem the troubles in Bohemia, where Elector Frederick received him favourably. Two further missions followed in 1621 and 1622, this time to France, and on Hay's return in 1622 he was created Earl of Carlisle. He returned to France in 1623, and again in 1624 when he joined Henry Rich, Earl of Holland in negotiating a marriage between Charles and Henrietta Maria.

In his retirement Hay put his energies towards various property interests in Ireland and the West Indies, and successfully took possession of all the islands from Barbados and St. Kitts. He died in Whitehall and was buried at St. Paul's Cathedral. He was survived by his only son James, and by his wife – considered one of the great beauties of the age – who lived on until 1660.

This fine picture descended to the Wynne family with a group of portraits of members of the Digby family. The sitter was previously incorrectly identified as Sir Everard Digby, who died in 1606, due to an old inscription in the lower right hand corner of the painting (visible in the 1998 sale catalogue); Mierevelt's signature and date were only made visible following later restoration. It was probably painted for Sir Kenelm Digby who not only would have known Hay through their diplomatic missions and their positions at court, but who was also linked to Hay and his wife through the Percy family (Venetia Stanley, who married Sir Kenelm Digby, was the granddaughter of Thomas Percy, 7th Earl of Northumberland).