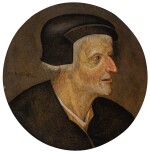 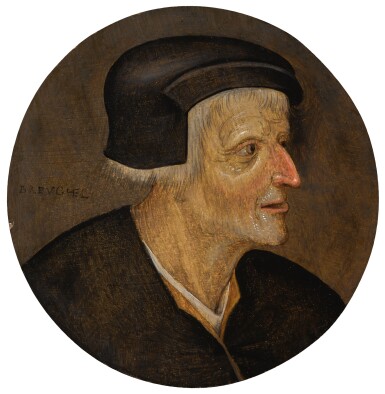 PIETER BRUEGHEL THE YOUNGER | Head of a peasant, wearing a black cap

PIETER BRUEGHEL THE YOUNGER | Head of a peasant, wearing a black cap

Head of a peasant, wearing a black cap

The circular panel is slightly bowed. It is uncradled, but supported with a vertical, metal baton affixed to a block on the reverse and a circular surround. The paint surface is clean and the varnish is clear and even. There is a tiny paint loss, centre left, visible in the catalogue illustration. Much of the underdrawing in the man's face has become visible to the naked eye. Inspection under ultraviolet light reveals a milky varnish, beneath which it is possible to discern small, cosmetic retouchings scattered through parts of his face and hat, around the upper margin, and his jacket, with a slightly more concentrated area in the centre of the lower margin. None of these distract from the legibility of the image, and the painting is in overall good condition.

With A. Brod, London;

This painting is one of just four circular head studies by Pieter Brueghel the Younger.1 The only picture of the group to be signed in full, it is also considered by Klaus Ertz to be that of the best quality.2 Each of the roundels depicts not a portrait, but a character study, perhaps reflective of a particular humour or one of the Seven Deadly Sins (though their varying dimensions exclude the possibility that they were conceived as a series): the painting in the Musée Fabre, Montpellier depicts a startled, moustachioed man wearing a red feathered hat; that in the Musée des Beaux-Arts, Bordeaux (inv. no. 7100) portrays a melancholy-looking man in black; and the picture sold at Christie's, London, 23 April 1982, lot 82, pictures a man in a cap, his mouth open in the act of yawning or shouting.3

Though erstwhile associations with Pieter Bruegel the Elder have now been dismissed, these heads are undoubtedly inspired by the work of the artist's father, such as the Portrait of a peasant woman, in the Alte Pinakothek, Munich (inv. no. 7057).4 The printmaker I.C. Visscher's series of 36 engraved portraits of peasants of 1568 – the inscription on the first of which: 'P. Breugel inventor. I.C. Visscher excudit', indicating their basis in the Elder's designs – must also have provided inspiration for Brueghel the Younger.

Underdrawing is clearly visible in the flesh tones, going some way to reveal Brueghel's working method, where in this case confident, apparently free-hand strokes (probably in charcoal) have been used to describe the man's features.

1 At the painting's last appearance on the market in 1993, the work was sold with a certificate from Max Friedländer, dated Amsterdam, 1 May 1953, as by Pieter Bruegel the Elder.

2 The form of the signature here – ‘Breughel’ as opposed to ‘Brueghel’ – indicates a date of execution after 1616, when the artist changed the spelling of his name. Property from a Private Collection
PIETER BRUEGHEL THE YOUNGER | Head of a peasant, wearing a black cap
Lot Closed
Lot 126