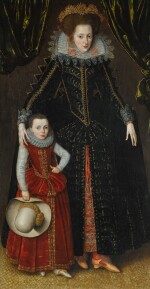 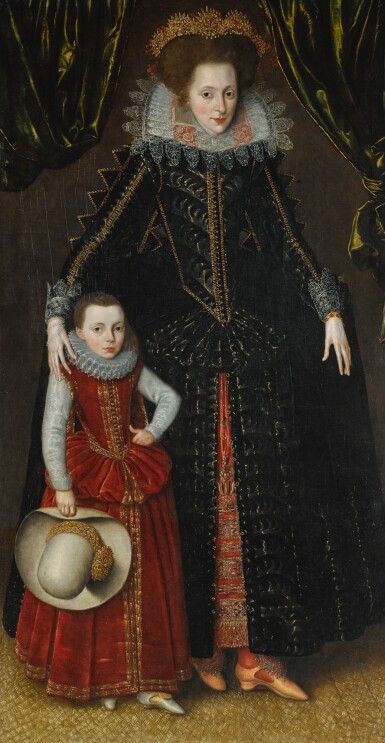 The canvas is lined, and the paint surface is stable with an old and slightly patchy varnish. There are a series of long and very fine white surface scratches in the background and Elizabeth's sleeve at the left. There are no major damages visible to the naked eye, but a handful of scuffs and scratches mostly at the outer margins. Inspection under UV light reveals a scattering of retouchings throughout, mostly of a cosmetic nature. The most significant concentration of these are in Edmund's face, the top of this hat, and the proper left hand of his mother resting on his shoulder. The ornamentation of both outfits, the lace, her headless, the green velvet curtains and woven matting are remarkably well preserved.

By descent with the Carews of Crowcombe Court, Taunton, Somerset;

With Weiss Gallery, London, 2007 (as Robert Peake), from whom acquired.

London, South Kensington Museum, National Portrait Exhibition, April 1866, no. 316 (as Mary Queen of Scots and her son James I).

This striking portrait is an archetypal example of the kind of grand full-length costume-piece that was popularised in the first two decades of the 17th century by artists such as Marcus Gheeraerts, William Larkin, John de Critz and, of course, Robert Peake himself. With the sitter often presented as if on a stage, against a backdrop of draped curtains, they echo the established tradition for royal and courtly portraiture first introduced in the 16th century in works such as François Clouet's portrait of Henry II of 1559, today in the Uffizi, Florence.1

Elizabeth Coningsby was the wife of Sir Thomas Wyndham of Kentsford in Somerset and together they had fourteen children, of whom eight (five sons and three daughters) were alive at Sir Thomas' death in February 1635. The young boy portrayed here is their eldest son, Edmund, who was born in circa 1601. He was later educated at Wadham College, Oxford, and in 1620 went to Lincolns Inn to study law. In 1623 he married Christabella Pyne, reputedly one of the most beautiful women of her time. She was to achieve renown during the reign of Charles I as the governess of Charles II, and later for taking the virginity of the future monarch, who was then only 14 years old.

Following his wife's advancement, Edmund became a courtier himself, though his first office of 'searcher of soap' and then later that of 'clerk of errors' did not find him in the first rank. At the start of the Civil War in 1641, Edmund was one of the first to declare for the King and from 1643, until its capture by Thomas Fairfax in 1645, he was the Governor of Bridgewater – one of the last bastions for the defence of the Royalist cause. After the Restoration, Colonel Sir Edmund (as he now was) was unsuccessful in every financial venture that he pursued, and upon his death in 1681 he left his surviving second wife in severe poverty.