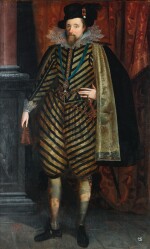 ENGLISH SCHOOL, CIRCA 1620 | Portrait of James VI of Scotland and I of England (1566–1625), full-length, wearing a black and white striped suit with a silk lined black cape, lace collar and cuffs and a hat with a feather, with the Order of Saint George

ENGLISH SCHOOL, CIRCA 1620 | Portrait of James VI of Scotland and I of England (1566–1625), full-length, wearing a black and white striped suit with a silk lined black cape, lace collar and cuffs and a hat with a feather, with the Order of Saint George

Portrait of James VI of Scotland and I of England (1566–1625), full-length, wearing a black and white striped suit with a silk lined black cape, lace collar and cuffs and a hat with a feather, with the Order of Saint George

The canvas is lined, and the paint surface is clean. For a canvas of this size it is in seemingly fair overall condition and well presented. The finer details of James I's lace and embroidery are well presented. There are losses and scratches throughout the stonework of the floor and base of the column on the left that have since paled. There is a modern extension along the top margin visible for 1cm. below the frame. There is a scratch with associated losses below the sitter's right shoe. Visible in the lights of the sitter's tights are traces of an older composition, although traces of this are not visible elsewhere. Inspection under ultraviolet light reveals a finely executed network of retouchings through the forehead, nose and cheeks of the sitter. The varnish has been badly applied in a streaky manner. The tights fluoresce lightly and reveal small retouchings to the aforementioned, older composition. There is an 'O' shaped restoration in the bottom right of the sitter's cape. Otherwise there is just a scattering of small, cosmetic retouchings.

By descent to H.H. Andreas, Prince of Saxe-Coburg and Gotha (b. 1943), Schloss Geinburg, Austria;

James was the offspring of the doomed match between Mary Queen of Scots (1542-87) and Henry Stuart, Lord Darnley (1545-67), who was murdered early in 1567 before James was one year old. Mary was forced to abdicate in favour of her son when he was only 13 months, and the infant king took up the Scottish throne. James became the first Stuart king of England in 1603 under the terms of the Treaty of Berwick which he had signed with Elizabeth I (1533-1603) in 1586. He married Anne of Denmark (1574-1619) in 1589, and together they had nine children.

Though much criticised, James may be considered a relatively successful ruler. He made a lasting impression on church history, commissioning a version of the Bible that was to become the standard text for more than 250 years: the King James Bible. His run-ins with Parliament which led, for example, to the Addled Parliament in 1614, did not lead to serious rebellion. In foreign policy he was an arbitrator; he made peace with Spain and aspired to achieve even greater stability throughout Europe, although his efforts were thwarted by Protestant opinion in Britain and Spanish resistance. Further abroad, he reigned over the beginning of the Empire and authorised the Evangelistic Grant Charter to settle the Colony of Virginia. As well as numerous attempts on his life, James suffered from ill-health and depression after the early death of Prince Henry in 1612 and the loss of his wife in 1619. The king himself died on 27 March 1625, and is buried in Westminster Abbey.

The Saxe-Coburg family acquired European prominence in the early 19th century when Duke Franz Friedrich Anton very advantageously married his children into prominent dynasties: his eldest daughter, Antoinette, to the Duke of Württemberg; Princess Julianne to the Grand Duke Constantine of Russia (a grandson of Empress Catherine the Great); and his youngest daughter Princess Victoire to Edward, Duke of Kent, brother of George IV. Victoire and Edward's daughter Victoria married her cousin Prince Albert of Saxe-Coburg and Gotha in 1840, perpetuating the family ties. Queen Victoria was the last member of the House of Hanover, which had ruled Britain since George I's accession in 1714; the House of Saxe-Coburg took over until the name was changed to Windsor in 1917 by King George V.