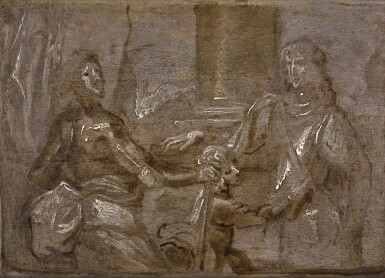 The panel is uncradled, flat and stable, and bevelled along all four edges. There is an old, horizontal repaired split along the grain, which runs through the heads of the figures, visible in the paint surface when viewed under raking light. The paint surface is relatively clean and the varnish fairly clear and even. There are no areas of damage or loss of paint except for a very minor, superficial surface scratch running from the lower panel edge and into Goring's breastplate through the outstretched arm of the Page. There is also a slight, circular discolouration in the centre, visible in the catalogue illustration. Inspection under ultraviolet light reveals minor retouching to the implied fictive frame upper centre, lower left and lower right and to a lesser extent the aforementioned split in the panel. There is also very slight retouching to the lower left hand edge of the background column in the centre as well as scattered flecks of cosmetic retouching in the background, particularly in the upper left and lower right hand corners. Finally there has been some strengthening to the form of the Page and to a lesser extent Blount. The panel is in overall good condition.

This painting is a preparatory sketch for Van Dyck's double portrait of Mountjoy Blount, 1st Earl of Newport and George, Lord Goring, painted circa 1639 (National Trust, Petworth House, Sussex).1 Newport and Goring both held high office in the King's army during the Bishops' Wars, Newport being Master General of the Ordnance, and General of Artillery in the North, while Goring was Lieutenant-General of Cavalry. This composition is believed to commemorate this episode in the two men's careers.

The sketch shows both men in military dress, as in the finished painting, with Goring's sash being tied by a page. The motif is Venetian in origin, and demonstrates the influence of works such as the Giorgionesque so-called Portrait of Gaston de Foix at Castle Howard, in which a young page can be seen fastening the sitter's armour. There are, however, a number of important differences between the present work and the finished painting at Petworth. In the latter, the two principal figures are brought closer together, and Van Dyck alters Newport's pose. On the right, there are further differences in the position of Goring's right arm and in the stance of the page, both of whose arms are brought forward to tie the sash, rather than just the one hand seen in the present work. The prominent column, upon which Goring rests, is also absent in the finished picture, replaced by a dark green silk curtain.

These numerous differences, as well as the rapid nature of the work, all suggest this to be a sketch from the early stages of the commission, possibly the artist's first thoughts for the composition, and as such it is a fascinating insight into his working method. The practice of making small preparatory sketches, as a means of roughing out his design for a composition, possibly in order to convey those ideas to a client, is one that Van Dyck would have learned in Rubens' studio. Indeed, the technique used in this sketch is strikingly similar to parts of Van Dyck's preparatory study for Charles I and the Knights of the Garter in Procession (Ashmolean Museum, Oxford). The distinctive dark eyes, the figures delineated in varying shades of brown, heightened with fluent touches of white, and structural elements drawn in broad areas of very thin paint in the texture of watercolour, are all consistent with the technique practised by Rubens prior to the 1620s, when Van Dyck was working in his studio.2