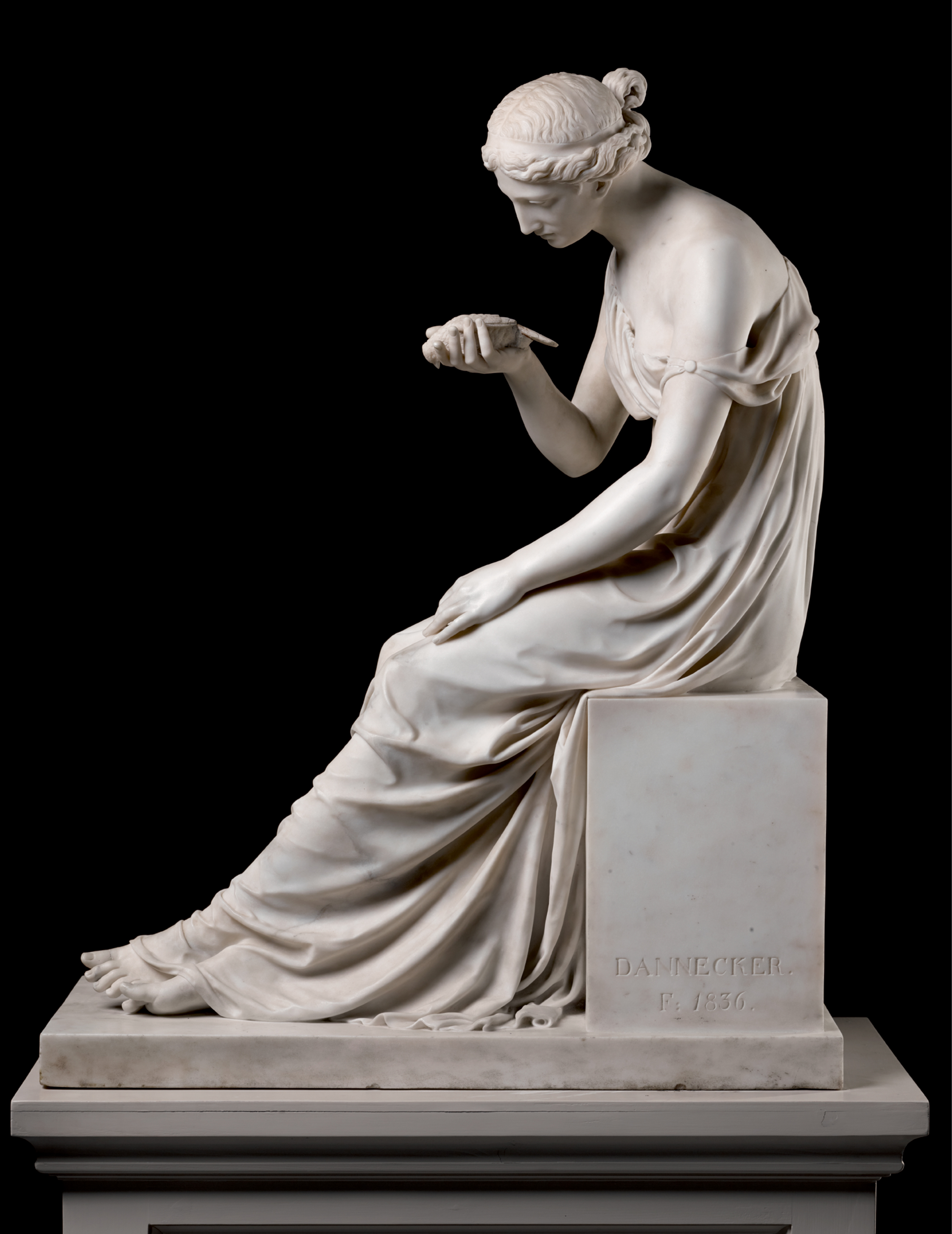 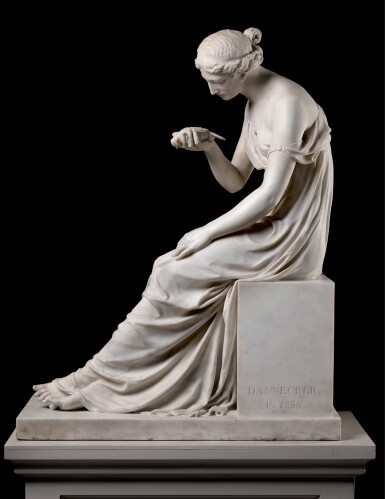 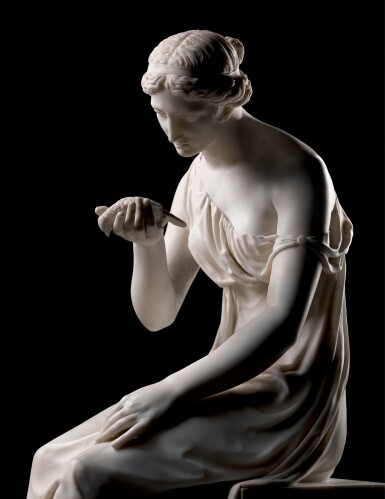 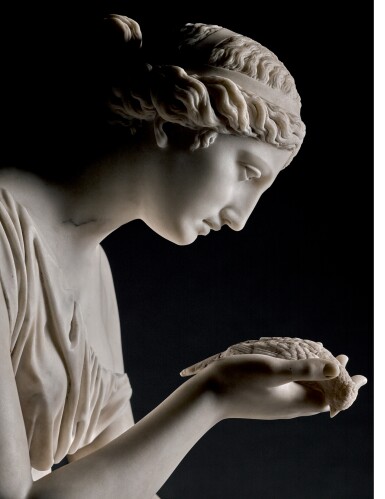 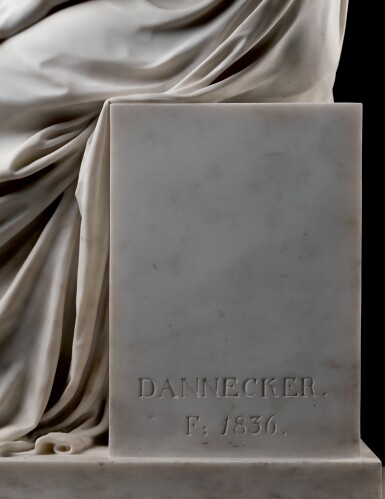 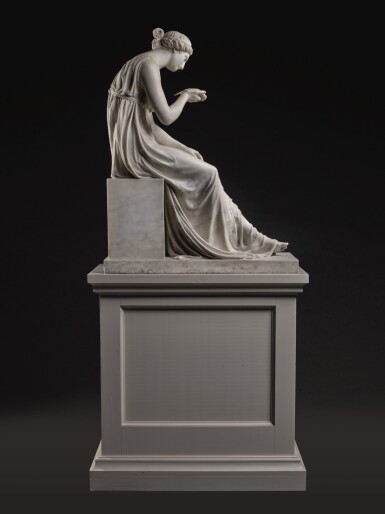 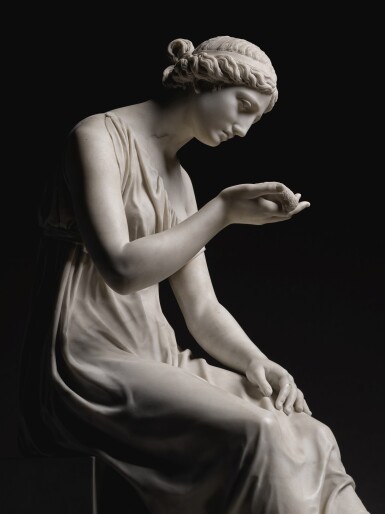 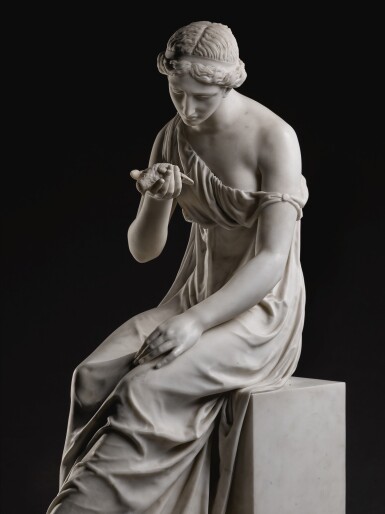 marble, on a later painted wood base

Overall the condition of the marble is very good with minor dirt and wear to the surface consistent with age. The marble retains its original beautifully carved and polished surface in excellent condition. The marble has a very attractive patina. The quality of the carving is superb.

There are two relatively minor restorations: the bird’s tail is reattached with probably later marble pieces and some plaster fill; and the woman's proper left big toe is reattached also with original pieces and some plaster fill. These restorations are not conspicuous. In our view a professional conservator could probably improve these to the extent that they are scarcely visible. There is natural veining to the marble throughout consistent with the material, including a more prominent natural vein running diagonally across the upper back. There are a few minor naturally occurring inclusions. There are a few very minor stable slightly open veins, including at the side of the base at the woman's proper right side. There are very minor abrasions and very small chips to some of the edges, particularly around the base.

the sculptor's studio, Stuttgart, until 1842;

by descent to her granddaughter Baroness Olga Emma Alexandra Eleonora von Gotsch (1848-1924) and her husband Justus R. Wüste, Santpoort (the marble is last mentioned here in 1909 by Spemann);

thence unknown until 1989, the marble was moved from Huize Spaarnberg, possibly to Villa Spaarnheuvel;

acquired by a private collector in 1989;

thence by bequest to the present owner

(In March [purchased] from the widow of Hofrath Dannecker in Stuttgart: a small white marble sculpture, being a seated Girl, called Lesbia, who grieves over a dead bird, according to an idyll by the Latin poet Catullus.

This is the last work by the deceased sculptor, purchased for 300 Louis d’Or, making a total of 3380,60 [guilder] including other costs)

The appearance on the market of the marble of Mädchen mit dem Toten Vogel, or Lesbia and her Sparrow, marks a major rediscovery in the oeuvre of one of Germany's most important Neoclassical sculptors, Johann von Dannecker. Although the marble was recorded as 'in the collection of J. Wüste' by Spemann in 1909 (op. cit. no. 13b), it was subsequently moved from its original setting in a villa in Santpoort, and disappeared from the public eye. In Christian von Holst's catalogue raisonné of 1989, the marble Mädchen mit dem toten Vogel is said to be lost. The present marble, dated 1836, and executed after a model Dannecker created in 1790, was probably the last marble to have been executed during the sculptor's lifetime. The plaster model, damaged after World War II and now missing its bird, is in the collection of the Staatsgalerie in Stuttgart (inv. no. P 702, since 1886).

Johann Heinrich von Dannecker was born in Stuttgart during the rule of Charles Eugene, Duke of Württemberg. He was the son of one of the Duke's stable-hands and coachmen, and as such Dannecker was accepted as a pupil at the Duke's academy, aged 13. Here, he was first encouraged to take up sculpting. In 1780, Dannecker graduated, and was appointed court sculptor to the Duke. Between 1783 and 1789, Dannecker thus had the opportunity to travel to Paris and most importantly to Rome - a visit that would significantly shape his career and his aesthetic. Significantly, during his four year stay in Rome, Dannecker befriended Antonio Canova, who later also visited Dannecker's workshop in Stuttgart.

Dannecker's experience in Rome and in Canova's studio were probably some of the factors that encouraged him to experiment with non-commissioned, 'free' sculptures in the Neoclassical style. Upon the sculptor's return to Stuttgart in 1789, his memories of Rome still fresh in his mind, and newly wed to his first wife Heinrike Rapp, he modelled the beautiful Neoclassical plaster of Lesbia and her Sparrow, based on an idyll by Roman poet Catullus (1st century BC). Catullus writes about his lover, whom he calls Lesbia, and her pet sparrow with whom she enjoys playing. In a later poem, the sparrow meets a sad end: Passer mortuus est meae puellae, writes Catullus, 'my girl's sparrow is dead'. In the present marble, the emotion of the girl is clearly visible, the marble exuding a warm serenity.

The Lesbia has often been regarded as one of Dannecker's masterpieces. The model seems to have defined Dannecker's career - although he created the plaster in 1790, he did not execute the marble until 1836. Schwab (1841, quoted in von Holst, p. 416) even notes that Dannecker had destined the execution of the model in marble as his last work, a promise which he appears to have kept, and which indicated that the sculptor had been attempting the marble version for some years - he was determined to finish the marble during his lifetime, even at an advanced age. It is interesting to note that a second version of the Lesbia, now lost, was executed by Dannecker's accomplished pupil and son-in-law, Theodor Wagner (1800-1880), for London banker John Baring (1801–1888, second son of Sir Thomas Baring 2nd Baronet and nephew of Alexander Baring, 1st Baron Ashburton). Since Dannecker was coping with ill-health in the early 1830s, it is possible that Wagner could have assisted Dannecker with the execution of the present lot.

When the marble Lesbia was sold by Dannecker's widow to Dutch banker Adriaan van der Hoop in 1842, it had been in the sculptor's studio for some years. Indeed, Van der Hoop already visited Dannecker in Stuttgart in 1838, when he purchased a relief of Clio and Melpomene (present location unknown) and must have already seen the Lesbia and her Sparrow - why had he not bought this marble at the same time? Carole Denninger suggests Dannecker might not have been ready to sell the sculpture due to its likeness to Dannecker's first wife and his emotional connection to the marble.

Adriaan van der Hoop was one of the richest people of his time. A banker, influential politician, and major art collector, his collection included Rembrandt's Jewish Bride, Vermeer's Woman Reading a Letter, Ruysdael's Mill at Wijk bij Duurstede, and countless other masterpieces. He bequeathed most of his paintings and drawings to the City of Amsterdam upon his death in 1854: they have been on loan to the Rijksmuseum since. The sculpture remained in the family of Van der Hoop's heirs until the death of Baroness Olga von Gotsch (1924), granddaughter of the banker's second wife. Fascinatingly, Empress Elisabeth (Sissi) of Austria spent some time in 1884 staying with Olga von Gotsch and her husband Justus Wüste, and is therefore likely to have admired Dannecker's masterpiece.The estate, Huize Spaarnberg, was neglected in the years between the Baroness' death and the start of World War II and eventually destroyed in 1951. The survival of the marble during this rather tumultuous episode is astounding - it is assumed that the sculpture was moved from the main house to the nearby Villa Spaarnheuvel, which at that point was the property of a religious order.

The Mädchen mit dem Toten Vogel, or Lesbia and her Sparrow, is a remarkable survival of Neoclassical sculpture of outstanding quality, and can be seen as Dannecker's ultimate chef d'oeuvre: its design and execution in marble preoccupied Dannecker during the majority of his career, and it is his last finished work. Its composition further significantly influenced some of his later models, including several versions of the Fates (von Holst, op. cit., cat. nos. 47, 60 and 68) and the Mourning Ceres (idem, cat. nos. 90 and 151). Its rediscovery after more than a century presents buyers with the opportunity to acquire a true Neoclassical masterpiece.

Sotheby's is grateful to Drs Carole Denninger for her research and assistance in cataloguing this lot. An expertise by Ms. Denninger is available from the department upon request.