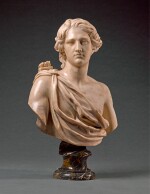 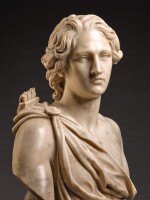 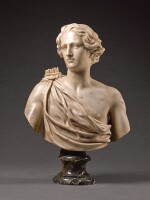 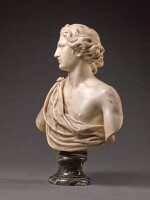 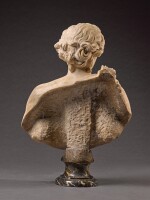 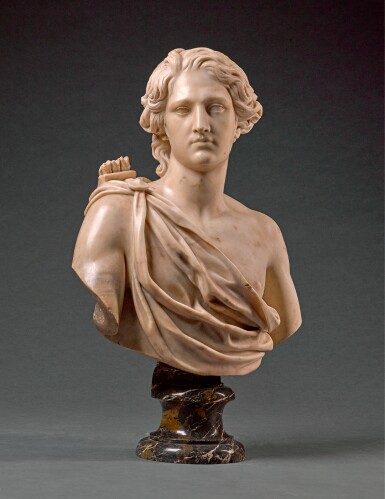 Overall the condition of the marble is good with minor dirt and wear to the surface consistent with age. There is natural veining to the marble consistent with the material, including at the throat and shoulders. There is a minor open vein to the hair above the forehead. There are minor naturally occurring inclusions to the marble, some of which (those to the chest) have been filled with wax. There is a small loss and reattachment to one of the folds of drapery at the chest. There is an original small hole between the proper left arm and shoulder. There are possible losses to the arrows in the quiver. There is minor dirt and other residues including to the hair at the back and to the back of the shoulders. There is general wear to the socle. The socle is attached to the bust with plaster, some of which is loose. There is brown paint to the top of the socle.

This elegant bust of the god Apollo recalls Roman late baroque sculpture in the wake of Alessandro Algardi (1598-1654), who pioneered the image of the idealised male youth in works such as his Borghese Table (Montagu, 1985, op. cit., no. 208) and St Philip Neri (see the terracotta head in the Museum für Kunst und Gewerbe, Hamburg, inv. no. 1976.86). The present Apollo, with his hair flowing back in curling locks from an off-centre parting, is in the tradition of youths based on the ancient archetypal portrait of Alexander the Great, reflected in Bernini's Daniel in Sta Maria del Popolo, and the St Sebastian in S. Agnese in Piazza Navona by Paolo Campi (fl. 1702-1742) (Engass, op. cit., fig. 182). The hair of Campi's Sebastian is a particularly appropriate comparison for the present bust, which is set apart as a bust of Apollo by the wonderful locks which rush away from the fringe as if caught in a sudden breeze. The carving of the hair and drapery is very fine. For a slightly earlier comparative, note the Bust of Jupiter by Domenico Guidi (1625-1701) in palazzo Gerini, Florence (Giometti, op. cit., pp. 334-337, no. 24.OA).