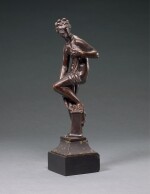 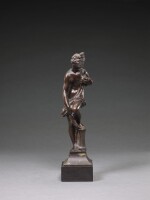 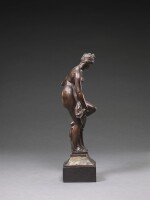 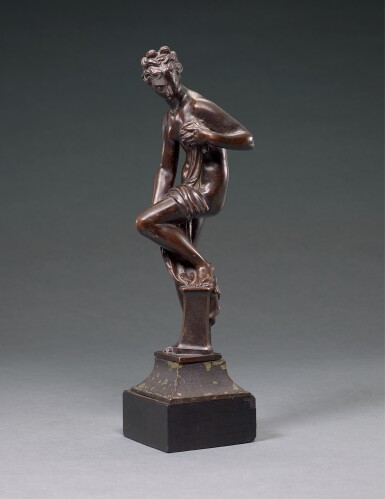 ATTRIBUTED TO THE WORKSHOP OF MASSIMILIANO SOLDANI-BENZI (1656-1740)

bronze, on a bronze socle and ebonised wood base

The dark lacquer to the bronze socle has worn in areas, revealing a greenish colour underneath. There are a few losses to the veneer of the wood base.

Massimiliano Soldani-Benzi was responsible for casting a series of fine small scale bronzes (all circa 30cm high) of the most famous ancient and renaissance sculptural models in Italy. Alongside the Venus de' Medici and the Dancing Faun, these included Giambologna's Cesarini Venus which dates to circa 1588 and was given by Grand Duke Francesco de' Medici as a gift to Giangiorgio I Cesarini, Marquis of Civitanova. The attribution of the present bronze to Soldani's workshop is based upon comparison with a bronze acquired directly from Soldani by William Kent in 1737-1738 for his patron Lt.-Gen. James Dormer (1679-1741) of Rousham, Oxfordshire, which was subsequently with Alex Wengraf. This bronze was discussed in 1993 by Anthony Radcliffe, who noted that 'the most interesting of the replicas [of the Cesarini Venus] are those that appear to have been produced in the workshop of the Florentine sculptor and medallist Massimiliano Soldani-Benzi... in the first half of the eighteenth century' (op. cit., p. 16). Both the present bronze and the Dormer bronze share an additional piece of drapery which falls from Venus' left hand to her thigh. This variation, which is not in the original model, appears to be specific to the Soldani casts (Radcliffe, op. cit., p. 16). Another cast which included this feature and was also attributed to Soldani was with Tomasso Brothers Fine Art in 2016 (op. cit.). According to Radcliffe, the Soldani bronze versions of the Cesarini Venus are the same scale as the signed bronze in the Kunsthistorisches Museum, Vienna (inv. no. 5874), 24.9cm; the present bronze is 25.4cm excluding the plate or terrasse on which Venus stands.