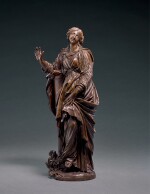 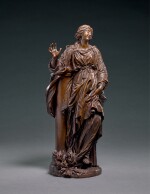 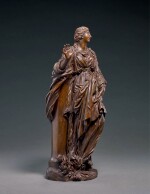 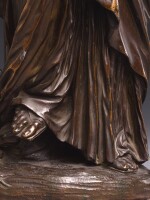 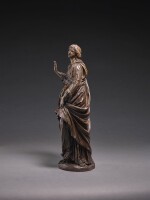 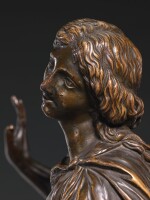 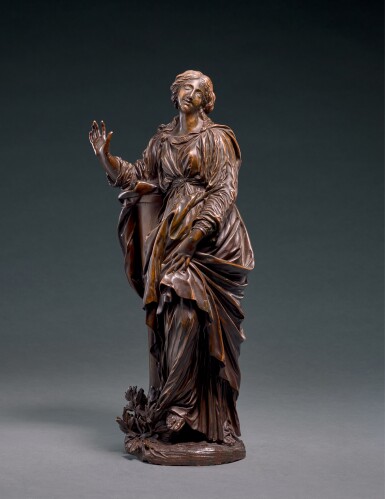 Overall the condition of the bronze is good with minor dirt and wear to the surface consistent with age. The bronze appears to have fallen during its life and the tip of the nose is slightly flattened and there are a few minor fissures in the upper back, below the neck. There are some very minor slightly visible fissures around the base of the throat at the front. The proper right little finger is slightly bent. There is some pigment to the end of the nose. The patina has rubbed slightly in a few areas, including to the hair, to the cheeks and to the high points of the folds of drapery. Particular rubbing of the patina to the drapery at the back. There is a stable original slightly visible joint at the proper right wrist. There are a few very minor surface nicks including to the neck and to the column. There is some minor dark spotting to the patina such as at the proper left wrist and to the column. There is some minor greening to the surface in particular at the crevices. There is a small hole in the back. There are a few minor original casting flaws to the lower edge of the base.

Discussing Bernini's Santa Bibiana, the sculptor's youngest son and biographer Domenico Bernini (1657-1723), commented that it 'is for both its tenderness and devotion indeed a miracle of art. Bernini always placed particular value on this work of his, so that even later in life when he was an established master in his profession, he would claim that "it was not he who had created the statue, but the saint herself who had sculpted and impressed her features in the marble" '(Domenico Bernini, Vita del Cavalier Gio. Lorenzo Bernini, Rome, 1713).

According to Andrea Bacchi in his exhibition catalogue for the groundbreaking Bernini retrospective held at Galleria Borghese in 2017-2018, the sculptor viewed his Santa Bibiana as being imbued with a near-miraculous quality. As is evidenced by the above quotation, Bernini consciously promoted the myth of divine intervention in her creation in order to rival the painterly notion of acheiropoieta: sacred images attributable only to the hand of God.

That Gian Lorenzo Bernini believed his statue to be the product of divine will underscores the exceptional status of the work and its ranking as one of the unquestioned masterpieces of western art. Santa Bibiana was commissioned as the centrepiece of Pope Urban VIII Barberini's project to remodel of the ancient church near the Baths of Diocletian which is dedicated to the early Christian martyr, Santa Bibiana, after her bones had been uncovered there in 1624. Bernini's statue stands above the high altar, beneath a window which illuminates the face of the Saint in her moment of religious rapture. The marble is a tour de force of carving in its virtuoso twisting strands of hair and rippling drapery, which almost seems to shimmer in the light. As Bacchi has observed, the remarkable intricacy of the hair and the plants at Bibiana's feet, point to the hand of Bernini's skilled assistant Giuliano Finelli, famed for his feet of Daphne which metamorphose into sinewy laurel roots in his master's Apollo and Daphne (1622-1625; Galleria Borghese, Rome, inv. no. CV).

Santa Bibiana in part mirrors Pietro da Cortona's painting of Saint Demetria in the same church, in which the subject's drapes are belted high above the waist. The ecstatic, open-mouthed, facial expression, on the other hand, betrays Bernini's debt to Guido Reni (1575-1642); compare, for example, with the painter's Saint Mary Magdalene in the National Gallery, London (inv. no. NG177). Perhaps the most remarkable aspect of the figure is the projecting right hand with delicate fingers, which form a contrast to the larger mass of the rest of the group and, in the original model, are framed by the tips of gilt bronze palms. Bernini evidently regarded the Santa Bibiana as a particularly ambitious work which reflected his burgeoning status as the pre-eminent sculptor in Rome. The statue was his first public religious commission, a landmark in his career, for which he charged some 600 scudi; a considerable increase on the David, carved only the year before, in 1623-1624, which had cost Cardinal Borghese just 300 scudi (Bacchi, op. cit., p. 184).

Early bronze reductions of Gian Lorenzo Bernini's models are rarely seen on the art market. The Santa Bibiana is one of the few religious sculptures by Bernini to have been cast in bronze. The only others are the Beata Ludovica Albertoni and the David (Malgouyres, op. cit., p. 70). Moreover, bronze casts of the Santa Bibiana are particularly rare. Aside from the present cast, only two others are known to the author: one which was at Drouot, Paris, 9 December 1994, lot 52 (48.5cm) and another offered at Christie's New York, 2 June 1993, lot 221 (47cm) (both cited in Malgouyres, op. cit., p. 70, n. 4). According to Philippe Malgouyres, these bronzes relate to high quality terracottas, which were probably modelled after the original marble; 'this is clearly the case with the Saint Bibiana, widely copied in clay' he notes and he states his opinion that the same is true for the Beata Ludovica Albertoni (op. cit., p. 70). Larger scale bronze versions of a number of Bernini's mythological models exist, including the Pluto and Proserpina and the Apollo and Daphne, casts of which are documented as having being acquired by George Parker, future Earl of Macclesfield (c. 1695-1764), on his Grand Tour to Italy between 1719 and 1722. Whilst it is logical that the Macclesfield casts may have been made in Rome, Malgouyres has asserted that they compare more closely with French bronzes and are likely to have been made in Paris in the 18th century (op. cit.).

Significantly, it is recorded that François Crozat, Marquis de Châtel (1691-1750), secretary to King Louis XV of France, owned a bronze Santa Bibiana, which was believed to have been cast from Bernini's model of the statue (recorded in the catalogue of the posthumous sale of his collection in Paris on 14 December 1750, as referenced in Bacchi and Desmas, op. cit., p. 340). This early reference to a bronze Santa Bibiana, opens the tantalising possibility that the present cast may be the one from Crozat's collection, whilst confirming that bronzes after Bernini's Santa Bibiana were in existence in the first half of the 18th century.

The present bronze exhibits superb casting particularly in the shimmering drapery which captures the virtuoso essence of Bernini's original model. The underside, unsurprisingly showing the use of the lost wax casting technique in its manufacture, and the slightly reddish colour of the alloy, indicates that it was made in Rome in the 17th century or, at the latest, in the early 18th century (as is surely confirmed by the Crozat terminus ante quem).