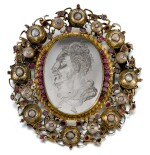 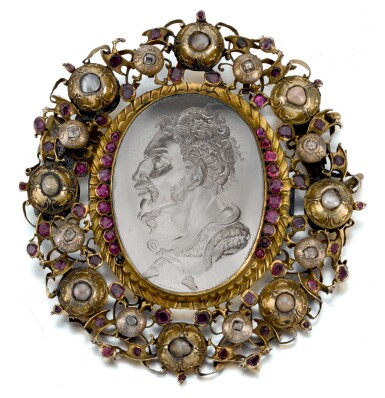 ITALIAN, LATE 15TH-18TH CENTURY | INTAGLIO WITH THE HEAD OF PAN

ITALIAN, LATE 15TH-18TH CENTURY | INTAGLIO WITH THE HEAD OF PAN

INTAGLIO WITH THE HEAD OF PAN

rock crystal, in an associated silver gilt mount set with diamonds, rubies and pearls, circa 1700

Overall the condition of the intaglio is very good with minor dirt and wear to the surface consistent with age. There are a few minor abrasions to the edges of the carving. There are one or two very minor possible chips. There are some very minor surface scratches. General wear to the mount. A few of the stones and settings from the mount are lost, including one at the upper left side and another further down on the right side.

This striking intaglio relates closely to a plaquette model that is thought to have originated in northern Italy in the late 15th century. Depicting the profile of the faun-like Roman god Pan, the plaquettes' subject is often alternatively identified as an idealised representation of Attila, whose name is inscribed on some of the model's variants. The inscription mentioning Attila is also present in a marble medallion showing the same motif on the facade of the Certosia di Pavia, dating probably to the 1490s, and there is uncertainty in the scholarship as to whether this relief is the model for the plaquettes or in turn derived from them. That the image may have been later reinterpreted as Attila is suggested by Rossi's (op. cit.) categorisation of the variants.

Rossi notes that the prototype versions of the plaquette, one of which is in the collection of Mario Scaglia, may have been cast from a carved gem. There is a tantalising possibility that the present rock crystal intaglio could be this prototype. Not only does it correspond exactly in size, but its carving is completely identical to the original plaquette design, a point that is underscored by the gem's impression. Its convex shape further seems to correspond to the shape of the plaquettes. Since other carved gems with the motif have been recorded, it cannot be excluded that the gem may be a later copy of the plaquette design. The suggestion that it could be its prototype is, however, a compelling one.