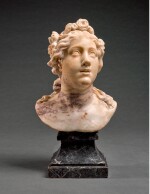 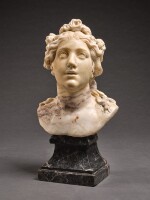 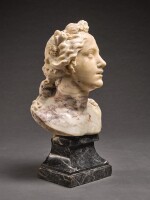 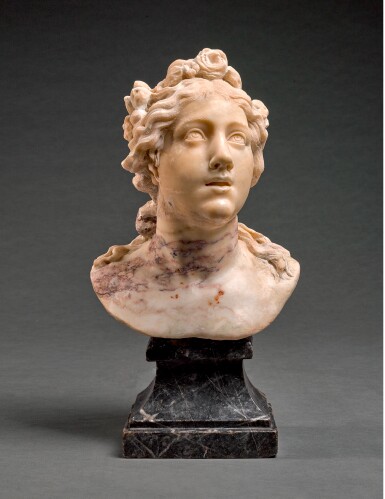 BUST OF ANIMA BEATA (THE SOUL IN HEAVEN)

﻿marble, on a black marble socle

Overall the condition of the marble is good with minor dirt and wear to the surface consistent with age. The marble is veined throughout with purple, yellow and white veins (as is visible from the catalogue photograph). There are a few small naturally occurring inclusions. There are a few scratches, and there are some minor chips and abrasions to the edges of the bust and green marble base. There do not appear to be any losses to the hair or diadem of flowers, though it is possible there could be one or two to some of the flowers.

This dramatic bust of Anima beata is carved after Bernini's model which is the pendant to the open-mouthed Anima dannata (Damned soul in hell), both of which are in the Spanish Embassy to the Holy See, Palazzo di Spagna in Rome. Bernini considered the models to be amongst his earliest sculptures and may later have been responsible for inscribing them: D'anni 12 ('aged 12'). The early history of the busts is unclear, but Andrea Bacchi has concluded that they are likely to have been made circa 1619 and were possibly acquired by Fernando Botinete y Acevedo (1565-1632). Despite an early inventory reference listing them as 'a nymph' and 'a satyr', Bernini's busts are considered to fall into a burgeoning tradition of representing the visage of the soul in a state of heavenly bliss, and the tormented vision of the damned soul burning in the fires of hell. The present marble is a particularly beautiful and well carved version of L'Anima Beata, which closely follows the original. It is interesting to note the deliberate choice of marble with purple veining, which has the visual effect of making the bust seem somehow alive (as if blood were pumping through the figure's veins) whilst also arguably linking the bust to the late Baroque and Rococo tradition of using unusual coloured marbles for emotive subjects. Compare, in particular, with the work of the Austrian-born Italian trained sculptor Balthasar Permoser (1651-1732) whose own Damned Soul is carved in a rich veined purple and white marble (Stadtgeschichtliches Museum, Leipzig). Permoser was directly inspired by Bernini: see, for example, his screaming Marsyas in the Metropolitan Museum of Art, New York (inv. no. 2002.468).