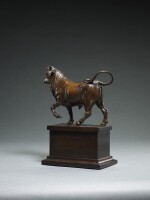 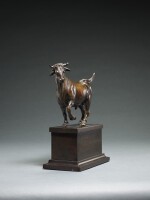 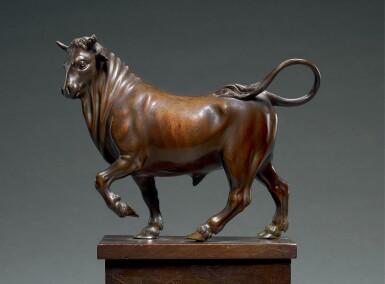 There is evidence of past worming to the wood base throughout. The joints of the bottom tier are slightly open, but stable.

Inspired by classical sculptures of sacrificial bulls, Giambologna's Pacing Bull was probably conceived as a pendant to the sculptor's Pacing Horse. According to Dimitrios Zikos, it is likely that the model is the same as the bronze Bull recorded on 14th March 1588 as being in the Galleria del Casino di San Marco (Paolozzi Strozzi and Zikos, op. cit. p. 242, no. 45). The attribution to Giambologna is confirmed through comparison with the Bull in his Lion attacking a Bull and by the explicit mention in the 1609 posthumous inventory of the collector Benedetto Gondi to 'a wax bull by the hand of the said (Giambologna)' (Avery, op. cit. p. 56).

The present bull is an example of one of two known versions of Giambologna's bull, the other version being of heavier build. The slighter model of the bull is often seen as a reworking by Antonio Susini (Avery, op. cit., cat nos. 143-144). The present cast shows some fine detailing in its execution, including to the edges of the ears, the hair on the head, and the well combed and divided strands of hair on the tip the bull's tail.

Formerly in the collection of the Earl of Abingdon at Highcliffe Castle, the bull is visible in an image taken of the library, published by Country Life in 1942 ('Highcliffe Castle, Hampshire, The Home of the Hon. Mrs. Stuart-Wortley).