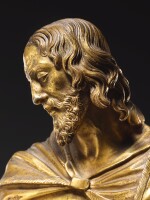 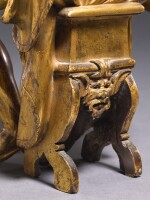 gilt bronze, with a veined red and yellow marble and Swedish porphyry base

Overall the condition of the bronze is very good with minor dirt and wear to the surface consistent with age. There is general wear to the gilding including dark spotting and minor greening. There is minor rubbing to the patina including at the knees and to some of the folds of drapery at the back. The bronze is cast in sections and stable original casting joints are slightly visible in a few areas including: at the tops of the arms and at the tops of the thighs. There are a few slightly visible original plugs. There are a few very minor casting flaws to the surface in a few areas. There is a drilled hole at a knot of drapery at Christ's proper right hip and another at the top of the groin on the proper right side (presumably there was a separately cast rope linking the two). Christ appears to have held a lost attribute in the proper right hand. There are a few minor surface scratches to the patina. There are one or two slight stable fissures including to the stool on the proper left side. There is general wear to the later associated marble base.

This large and beautifully finished gilt bronze is unpublished and appears to be a unique cast. The iconography combines the Ecce Homo with the theme of Christ on the cold stone, an apocryphal episode particularly popular in Northern Europe. However, Christ is depicted not on a rock, but, exceptionally, on a sgabello - a type of Renaissance stool. The sgabello might indicate that the sculptor was Italian and, perhaps specifically Florentine. The unusual winged grotesque mask recalls the varied masks on the bed in Giambologna’s Sleeping Nymph and Gianfrancesco Susini’s bronze David with the head of Goliath, which includes a sgabello. However, other features of the bronze seem at odds with an Italian origin.

The metal alloy is high in copper (c.83%) and zinc (c.14%), but low in traces of all other elements, which could indicate a northern manufacture. Christ’s pose, seated and arms crossed, recalls Adriaen de Vries’s two large models of Christ in the Liechtenstein collection and in the National Museum Warsaw, but the vertical proportions, modelling and long folds of drapery are quite different. The delicate, refined goldsmith-like treatment of the hair and beard have affinities with the heads of Christ and the apostles in Hubert Gerhard’s relief of the Raising of Lazarus on the Tomb of Dr Thomas Mermann in the Diözesanmuseum, Freising, and Lazarus’s long torso is notably similar. Yet the conception of the seated gilt bronze figures of Moses and a Prophet from Gerhard’s famous Christoph Fugger Altarpiece in the V&A is considerably more vigorous in composition and modelling. The casting of the legs and arms in separate sections is also technically different from Gerhard’s modus operandi. Nevertheless, a southern German sculptor in the circle of Gerhard, such as Hans Krumpper, Franz Aspruck or Caspar Gras, needs further exploration.

A Netherlandish sculptor for this bronze is suggested by a large Ecce Homo in the Sint Gummaruskerk in Lier, near Antwerp (https://www.bildindex.de/document/obj20041315) which depicts Christ with a similar elongated, solid torso and gently crossed arms, yet the drapery is more voluminous and baroque indicating a later dating in the second half of 17th century, which seems stylistically too late for the present bronze. The subject and gilding also find affinities in the world of the Italian sculptor, Pompeo Leoni, working in Spain.

This enigmatic Ecce Homo resonates with Italianate notes: the sgabello, the grotesque mask, the refined casting, yet there remain dissonant points, such as the alloy and proportions of the anatomy. A German or northern European sculptor, trained in Italy, and probably Florence, or perhaps an Italian working abroad might rationalise the disparate elements of this unique bronze.