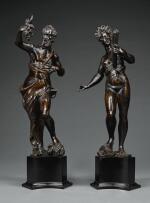 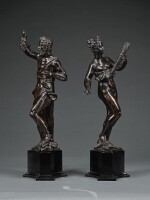 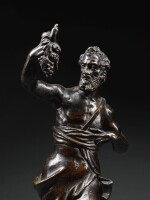 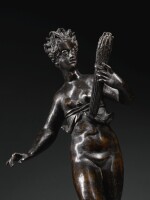 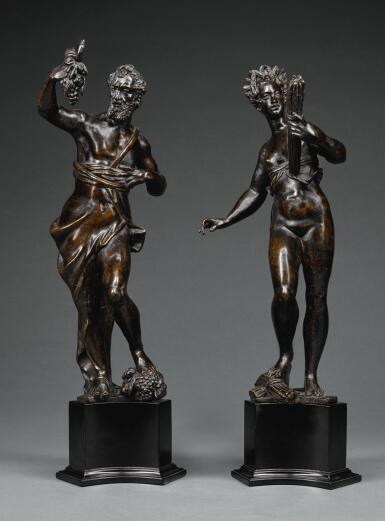 Overall the condition of the bronzes is good, with minor dirt and wear to the surface consistent with age. There is wear to the lacquer patina, including rubbing at the high points and minor flaking, notably to the woman's legs. There are a few minor casting flaws, including lacunae, most of which have been filled, including to the man's proper right inside thigh, the woman's proper right calf and between her buttocks. There are a few original casting plugs, notably at the woman's proper left breast. There are several minor nicks and scratches. The bronzes are attached to the wood bases with bronze bolts. The female figure rotates on the base.

The bases are in very good condition.

These graceful figures are rare models within the corpus of Venetian andiron figures, of which only one other pair is known in the Kunstgewerbesammlung in Bielefeld (Eberle, op. cit. p. 2439). As a crowning pair to stand on andirons, Eberle suggests that these figures, considering their particular iconography referring to food, wine and abundance, would have been perfect within the context of a dining hall or 'sala grande'.

The present pair of Bacchus and Ceres is distinguished by a rich patination and elegant, Mannerist poses, the two Gods seemingly curving towards each other. Comparison can be made to the work of Alessandro Vittoria, with Ceres' pose mirroring his Cleopatra (Bayerisches Nationalmuseum, inv. no. R. 3225). Compare also to a pair of bronzes of Jupiter and Juno, after Alessandro Vittoria, Sotheby's New York, 22 November 1988, lot 112. The same models were offered at Christie's Paris as part of the Collection of Yves Saint Laurent and Pierre Bergé, however these were not attributed, and catalogued as 'Venetian, late 16th or early 17th century'.

Based on the stylistic comparisons mentioned above, an attribution of the models for the present bronzes to Alessandro Vittoria seems warranted. However the production of small scale bronzes and andirons is likely to have been left to his workshop assistants and pupils while the master focused on prestigious projects. From the 1580s onwards, it appears that Vittoria's workshop played an increasingly important role. Virgilio Rubini, one of Vittoria's principal collaborators and his nephew, inherited all Vittoria's tools and models upon the sculptor's death (Martin op. cit.). Active in Alessandro Vittoria's workshop from 1574 onwards, and in possesion of all models and tools after his master's death in 1608, Virgilio Rubini is certainly the most likely candidate to have executed these bronzes.