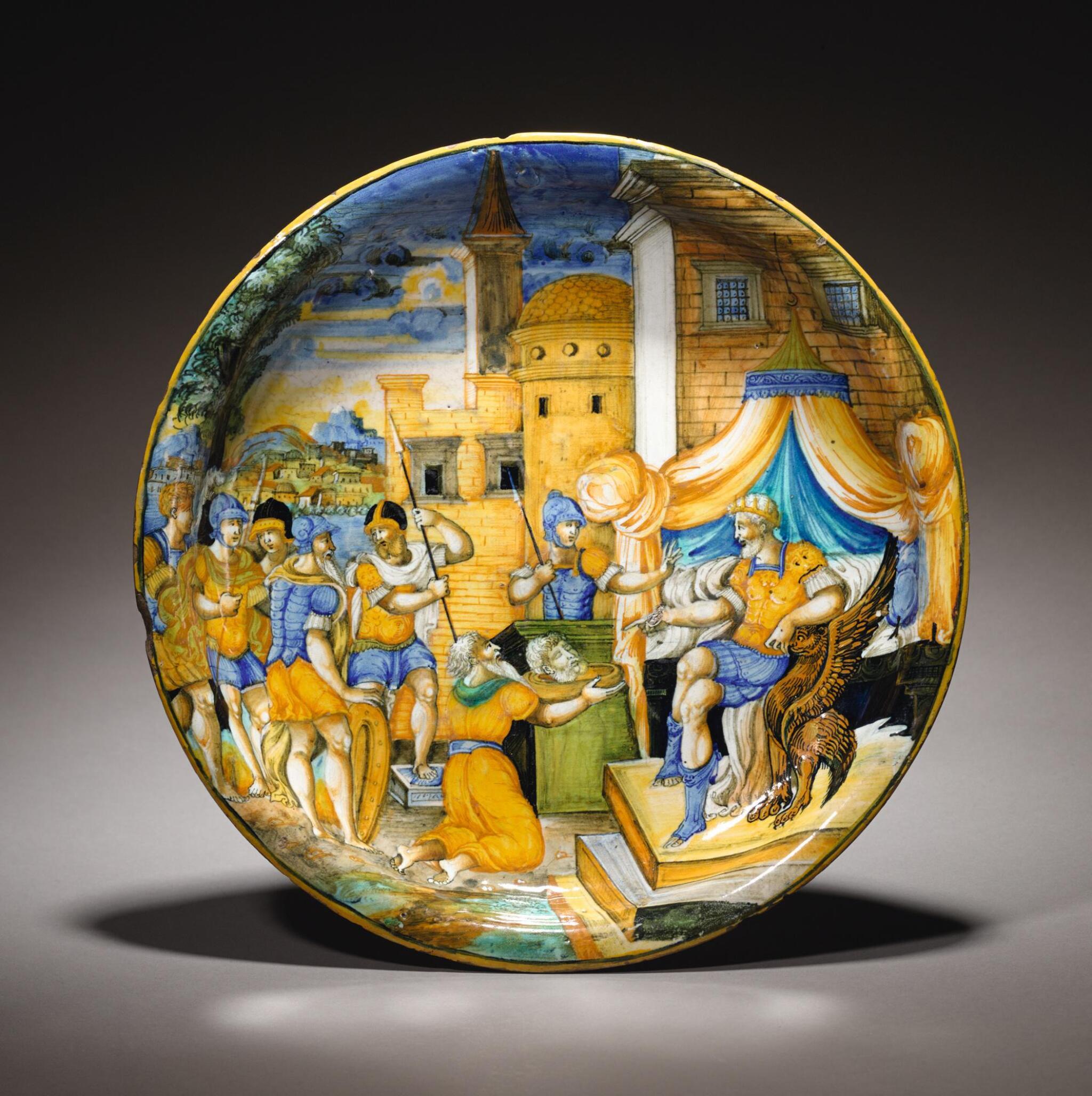 ISTORIATO SHALLOW BOWL WITH THE PRESENTATION OF THE HEAD OF POMPEY

inscribed and dated in black script to the reverse: il Richo Do-- de honora / ta tesfta 1548 and with an old gallery label to the reverse inscribed: Galleria Pesaro / Milano / 240 and with various export stamps

Overall in good order and of good appearance, the minor faults described are typical of maiolica wares of the Renaissance and do not detract from the piece.

There is scattered chipping to the rim, most notably at 12 o’clock, two chips close together at 5 o’clock and one just above 9 o’clock. Some lesser minor rim chipping and glaze flaking at 1, between 2 and 3, at 7 and 10 o’clock.

There is a surface glaze blemish to the gesturing hand of Caesar (images available) with slight loss to the glaze and minute glaze fractures associated. A minor glaze star crack to the underside of the dish and very minor glaze flakes to footrim. Very minor surface wear typical of a dish of the period. The sky to the right of the steeple at the top centre of the composition appears to have been re-worked at the time of manufacture, perhaps disguising an area left plain for a coat-of-arms to be added. The steeple itself is thickly applied and the glaze to the right is uneven with an excess piece of clay to the centre of this area which has a very small glaze chip (images available).

The scene depicted comes at the end of the Great Roman Civil War and shows Caesar presented with Pompey’s head. Following his decisive defeat at the Battle of Pharsalus and the effective end of the Republic, Pompey fled to Egypt where he was assassinated, probably on the orders of Ptolemy, who feared both being usurped by Pompey and the advancing Caesar. The inscription to the bowl may be taken from Petrarch’s sonnets, and refers to the gift of the honoured head (Thornton and Wilson, op. cit., no. 64). A similar scene and verse are on a dish in the Wallace collection (Norman op. cit. no. C99). The use of a scene from Roman history with a verse from Petrarch was popular in Urbino and owes a debt to Sforza di Marcantonio’s mentor, Francesco Xanto Avelli, suggesting that Sforza may have worked in Urbino in the 1530s and early 1540s. Originally from Casteldurante he is recorded in Pesaro by at least 1548 perhaps at the Lanfranco workshop (Thornton and Wilson, op. cit. no. 210, where the authors refer to a document cited by P. Bonali and R. Gresta, Girolamo e Giacomo Lanfranco dale Gabicce maiolicari a Pesaro nel secolo XVI, Rimini, 1987, p. 94, placing Sforza di Marcantonio in Pesaro by 17 May 1548). A shallow bowl dated 1551 in the collection of the British Museum attributed to Sforza is by the same hand as the present bowl (ibid no. 210).

The Galleria Pesaro, who at one point owned this istoriato bowl, was one of the most prestigious Italian galleries of the early 20th century. The gallery also exhibited contemporary masters, including works by renowned modernist Adolfo Wildt, who first exhibited his l'Anima e la sua Veste here in 1919. A version of Wildt's L'Anima which is one of two which had been with Galleria Pesaro was sold in these rooms, 12 December 2018, lot 83.