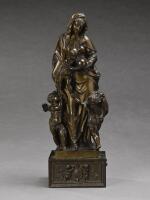 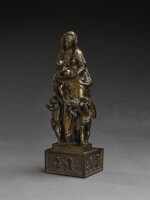 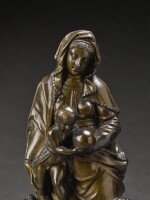 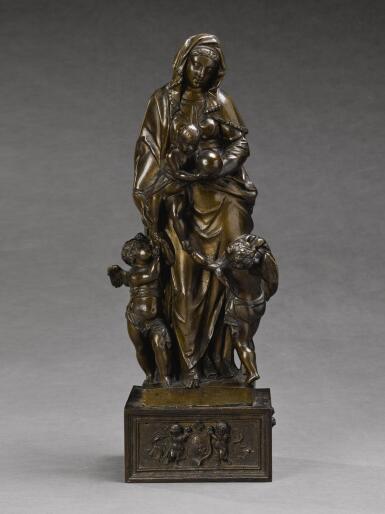 WORKSHOP OF SEBASTIANO NICOLINI (ACTIVE FROM 1614)

VIRGIN AND CHILD WITH TWO PUTTI

bronze, on an associated bronze base

Overall the condition of the bronze is good with minor dirt and wear to the surface consistent with age. There are various nicks and scratches to the surface. There are remnants of old black lacquers to the surfaces and in some of the crevices. There are - as is typical with 17th-century Venetian bronzes - various minor casting flaws including fissures to the side of the Virgin's proper right leg and some pitting. Various casting flaws to the legs and sides of the putti and to some of the edges of the bronze and to the back. The reverse is open (as was originally intended) and there is original core material to the interior. There is an iron plate with bolts to the interior to fasten it to the associated bronze base. There is a casting flaw to the top of the base on the left side. There are various nicks and scratches and wear to the sides and corners of the base. The rear edge of the base is thin with an irregular edge. There is a hole to the top of the Virgin's head.

This beautiful group of the Virgin and Child with two putti is a rare devotional work that can be firmly associated with the celebrated Venetian workshop of Nicolò Roccatagliata and his heirs. Following his death in 1629, Roccatagliata's studio was inherited by his son, Sebastiano Nicolini, and bronzes were cast after the two sculptors' models well into the later 17th century.

Born in Genoa around 1560, Nicolò Roccatagliata moved to Venice sometime before 1594 and is thought to have been the master of a substantial workshop that included his talented son. Sebastiano became an eminent bronze sculptor in his own right and appears to have collaborated with his father on numerous commissions. Though the large-scale antependium relief dated 1633 in the Venetian church of San Moisè is signed by both father and son, Nicolò's documented death in 1629 indicates that it must in fact be primarily the work of Sebastiano (see Kryza-Gersch, op. cit. 2008, p. 262).

The present bronze is clearly indebted to a signed work by Nicolò, his group of the standing Virgin and Child at the Musée national de la Renaissance in Écouen (inv. no. C1.13.272). The Écouen Virgin's overall pose, dress and facial expression reappear in the present Virgin, albeit broader and softened, lacking the sharp, heavy eyelids and precise nose of the Roccatagliata model. While the two playful putti in the present bronze display the characteristic Roccatagliatesque curls, the Christ Child's hair is flatly engraved into the surface, indicating that the group may have been modelled by Sebastiano or a member of his workshop. A stylistically distinct version of the present model (with some variations) is found in the Metropolitan Museum, New York (inv. no. 1978.516.5).