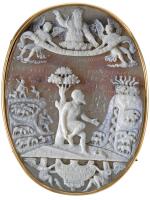 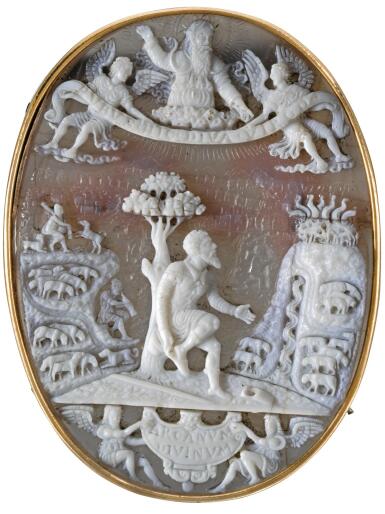 CAMEO WITH MOSES REMOVING HIS SANDALS BEFORE THE BURNING BUSH

agate, in a gold mount

Overall the condition of the cameo is excellent with minor dirt and wear to the surface consistent with age. There is minor natural veining to the stone consistent with the material, in particular a very minor stable slightly open vein running through the right side from top to bottom, and a smaller one which crosses it from right to left and goes through Moses’ upper body. The small network of veins is better understood from the reverse. There are no obvious chips to the carved surface. The veins are barely visible since the carver has ingeniously carved the decoration along these veins thereby obscuring them. There is general wear to the mount including oxidation.

The cameo depicts the moment from Exodus 3 when Moses, upon seeing the Burning Bush, is instructed by God to remove his sandals, for he is standing on holy ground. The inscription RVBVS ARCANVM is a direct reference to the scene above, whilst RVBVS HIC DIVA VIRGO may allude to the metaphorical connection between the Burning Bush and the Virgin Mary. The carver of the present cameo has cleverly modelled Moses' pose on the figure from the famous Diomedes and the Palladium gem: a carnelian, which was formerly in the possession of Pope Paul II and thence Lorenzo de’ Medici, and is now held in the Museo Archeologico in Naples (see the bronze impression in the Metropolitan Museum of Art inv. no. 27.14.4). The present cameo is likely to have been carved in Northern Italy, perhaps Milan, in the second half of the 16th century. The figure of Moses is comparable with the bearded Magi in a North Italian 16th-century cameo depicting the Adoration of the Magi in the Royal Collection (inv. no. RCIN 65175). The use of the stone, with white opaque high relief areas adopted for the primary narrative, and the dark background engraved with low relief subsidiary scenes, is similar to a Milanese agate cameo with Noah's Ark in the Museo degli Argenti, Florence (inv. no. Gemme del 1921, n. 1808). Compare also with a chalcedony cameo with Venus and Mars on Olympus in the same museum (inv. no. Gemme del 1921, n. 18). There are conceptual similarities with the work of the celebrated Milanese gem engraver Alessandro Masnago (1560-1620). Compare, for example, with his Adoration of the Shepherds in the Kunsthistorisches Museum, Vienna (inv. no. XII 818) with its angels and cherubim floating above the Nativity. It is likely, however, that the present gem is slightly earlier in date, since it follows a more structured composition, with subdivided scenes: the Burning Bush to the right and a bucolic scene with a shepherd (who appears to be playing the bagpipes) to the left, framing the central protagonist. The quality is very high and the gem must have been made by an engraver of significance around the third decade of the 16th century.