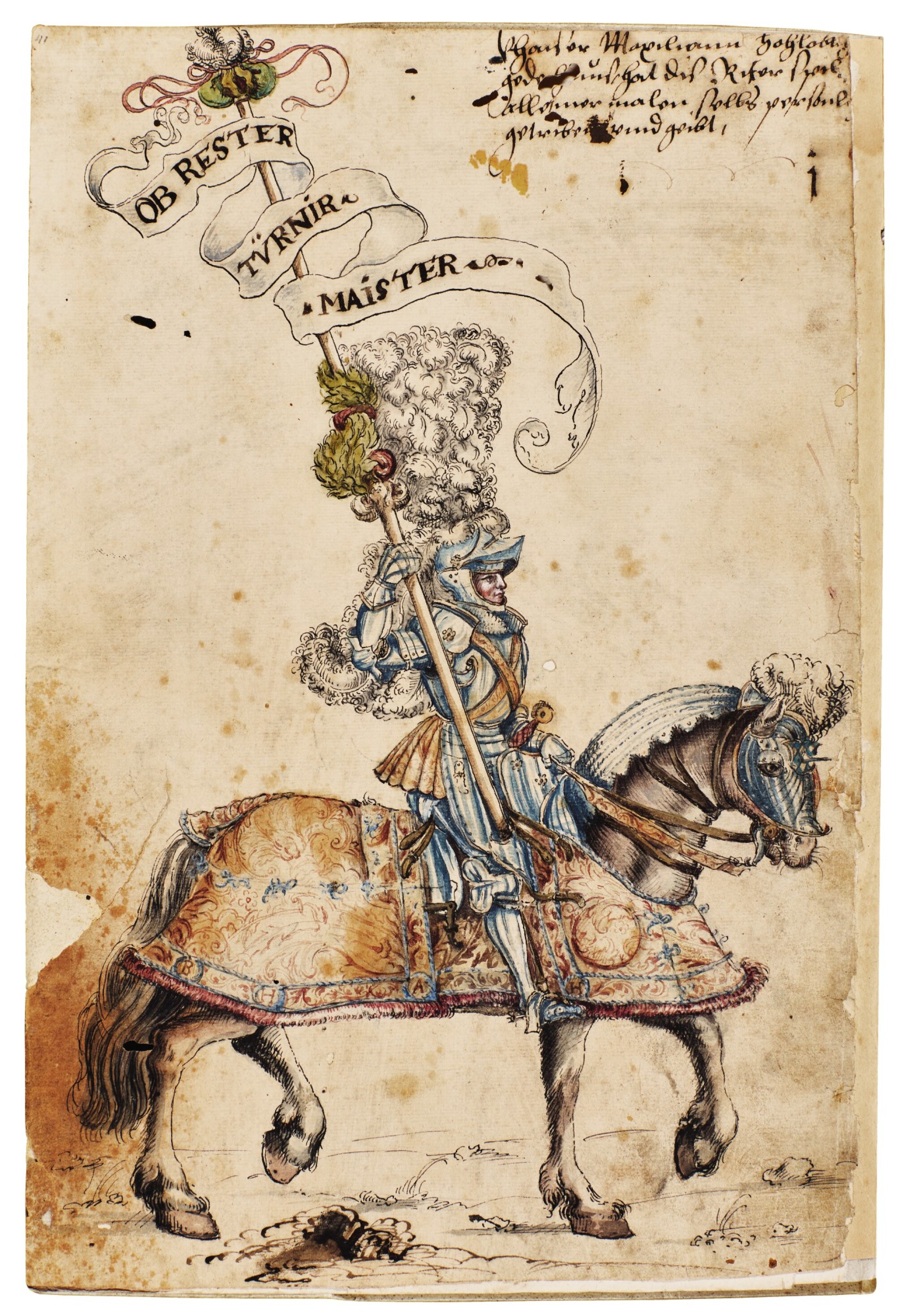 WORKSHOP OF HANS BURGKMAIR THE ELDER

A 'TOURNAMENT BOOK', WITH 16 NUMBERED SHEETS OF DRAWINGS OF KNIGHTS, MOSTLY ON HORSEBACK, IN PAIRS

The drawings all pen and black ink and watercolor and bodycolor;

all laid down on the sheets of a vellum-bound album;

all the sheets numbered consecutively and inscribed in banners and cartouches with an indication of the identity or activity of the knights depicted:

The album and backing sheets in good condition. Some of the drawings significantly damaged, with redrawn areas, and with repaired tears and losses. All foxed and stained. None the less, the ink and colours remain strong, and the images are entirely readable.

The Princes of Liechtenstein (with their bookplate);

This remarkable album of coloured drawings of processing knights is a rare survival of a cultural phenomenon that swept the Germanic regions in the late 15th and early 16th centuries: the near cultish reverence for knights, and all things related to their activities.

Perhaps the high point of this trend is manifested in the two monumental series of images of the Triumphal Procession of Maximilian I, both commissioned by the Holy Roman Emperor Maximilian I (1459-1519) to glorify his own image and reputation.  The first of these is a set, originally numbering no fewer than 109 exquisite ‘giant miniatures’, images in watercolour and gouache on parchment, produced by Albrecht Altdorfer and his workshop around 1512-15, and now in the Albertina.1 At the same time, Maximilian also commissioned the remarkable set of engravings on the same theme, which were designed by almost all the leading German artists of the period, including Hans Burgkmair, Albrecht Altdorfer, Hans Springinklee, Leonhard Beck, Albrecht Dürer, Hans Schäufelein and Wolf Huber. Unfinished at the time of Maximilian’s death in 1519, the series was originally intended to consist of no fewer than 200 prints, but ‘only’ 137 were actually executed – including Dürer’s famous image of The Triumphal Chariot of Maximilian I.2

It was, of course, the widely circulated prints that were to have the greatest influence. They depict great ranks of knights, mostly on horseback, all wearing extremely elaborate armour and head-pieces, and often carrying grand banners. Their horses are no less extravagantly attired. Indeed, the significance of the armour and other decorative elements in the whole iconography of the Triumph was so great that it has recently been the subject of a major exhibition at the Metropolitan Museum of Art: The Last Knight. The Art, Armor, and Ambition of Maximilian I.  As Pierre Terjanian wrote in the introduction to the exhibition catalogue: ‘The true significance of armor extends to the part it played in [Maximilian’s] efforts to construct his identity, enhance his own legitimacy as a ruler and that of his descendants, shape the memory of his deeds, and, at all times, consolidate his political authority and spheres of influence.’3

Maximilian was, after all, in some need of consolidating his political authority. At the age of only 18, the young Archduke of Austria married Mary of Burgundy (1457-1482) and went with her to rule jointly over her dominions in the Low Countries, which she inherited from her father, Charles the Bold (1433-1477), Duke of Burgundy, who had just been killed in battle at Nancy. Young and inexperienced, Maximilian faced many political and military challenges in the Low Countries, and it was essential for him to develop a popular image as a strong and heroic leader, so he took great pains to perform with great bravery both on the battlefield itself, and in the many tournaments and jousts that characterised life at his court.

Particularly after peace was established in the Low Countries in 1493, tournaments became a central part of courtly life, and Maximilian even commissioned for his posterity a major memorial project, entitled Freydal, which was intended to be a literary re-enactment of his triumphs at various tournaments, during the period leading up to his marriage to Mary of Burgundy. A superb illuminated manuscript, in the Kunsthistorisches Museum, Vienna is the most important surviving record of this project, and also the finest example of what is known as a ‘Turnierbuch’ (‘Tournament Book’).4

The album presented here is another very significant and particularly fascinating example of such a Turnierbuch, as it is not only one of very few such albums that survives today, but is also closely linked in a different way with the imagery and iconography of the Emperor Maximilian I.

It consists of 16 sheets, drawn in pen and ink with watercolor and gouache, depicting lance-bearing knights in very elaborate ceremonial armour. The first and last sheets show a single, mounted ‘master of ceremonies’-type figure (entitled, respectively, ‘Obrester Türnier Maister’ and ‘Obrester Zenmaister’). 13 of the remaining 14 sheets show pairs of elaborately clad knights on horseback, and one a pair of knights on foot. On the first sheet is an inscription, only partially legible, which seems to indicate that the tournament commemorated here was recorded on the personal orders of Emperor Maximilian, who was, however, no longer alive by the time the drawings were made (the legible portions of the text, transcribed above, translate loosely as 'Emperor Maximilian of much adored memory has this knightly joust by … painter himself… ‘). The sheets, which are consecutively numbered from 1 to 16, have suffered a certain amount over the centuries, but are now securely laid down on the pages of a later album, and despite the trials they must have endured, the drawings themselves remain extremely fresh and the colours vibrant.

From the paper, media and graphic style, the drawings would appear to originate from the Augsburg orbit of Hans Burgkmair, chief designer of the Triumph of Maximilian I prints, and to date from around the 1530s. The specific images in the album are closely linked to the prints in the great Maximilian series, but in each case the paired figures that we see here have been extracted from the front of a larger group in the prints (fig. 1), and the details of armour, banners, captions, inscriptions and other paraphernalia have been changed. In the example reproduced here, the decorated livery of both horses has acquired stripes that are not seen in the printed prototype. Another fundamental difference is, of course that the drawings in this album are richly coloured, rather than monochrome like the prints, or like Albrecht Dürer’s rather similarly conceived studies for riders and knights within the prints.5

This imaginative repurposing of elements from the Maximilian prints seems in fact to have been undertaken by Burgkmair himself, in collaboration with his son, Hans Burgkmair the Younger, and is a fascinating illustration of the immense influence those remarkable and ambitious prints had – demonstrating how successful Maximilian’s propaganda campaign really was. This fascinating Turnierbuch demonstrates just how pervasive both the ethos and the images of his court were throughout the Holy Roman Empire.

At least two other similar albums are known. One, known as the Augsburger Geschlechterbuch, by Hans Burgkmair and Heinrich Vogtherr the Youngers is in Stuttgart.6 The other, probably a little later in date, from around 1540, is in the Bayerische StaatsBibliothek, Munich.7  Yet another version of the series was formerly in the Hohenzollern Sigmaringen collection and was reproduced in coloured prints in the 1853 (fig. 3). In all cases, the details and colouring in each sheet are very different from what we see in the present album.

Other such albums must also have existed, but are unknown today, and this is therefore a very rare survival, from the middle of the 16th century, of a phenomenon that was central to the artistic and cultural life of the Holy Roman Empire, and to the view that later generations and centuries have always held of the Emperor Maximilian and his famed court.

That the album has been long appreciated is evident from the fact that it was for centuries part of the illustrious collections of the Princes of Liechtenstein.

We are most grateful to Dr. Giulia Bartrum, Dr. Hans-Martin Kaulbach and Dr Erwin Pokorny for their helpful comments while researching this album, and to Dr. Fritz Koreny for his kind help in deciphering the inscription on the first page.