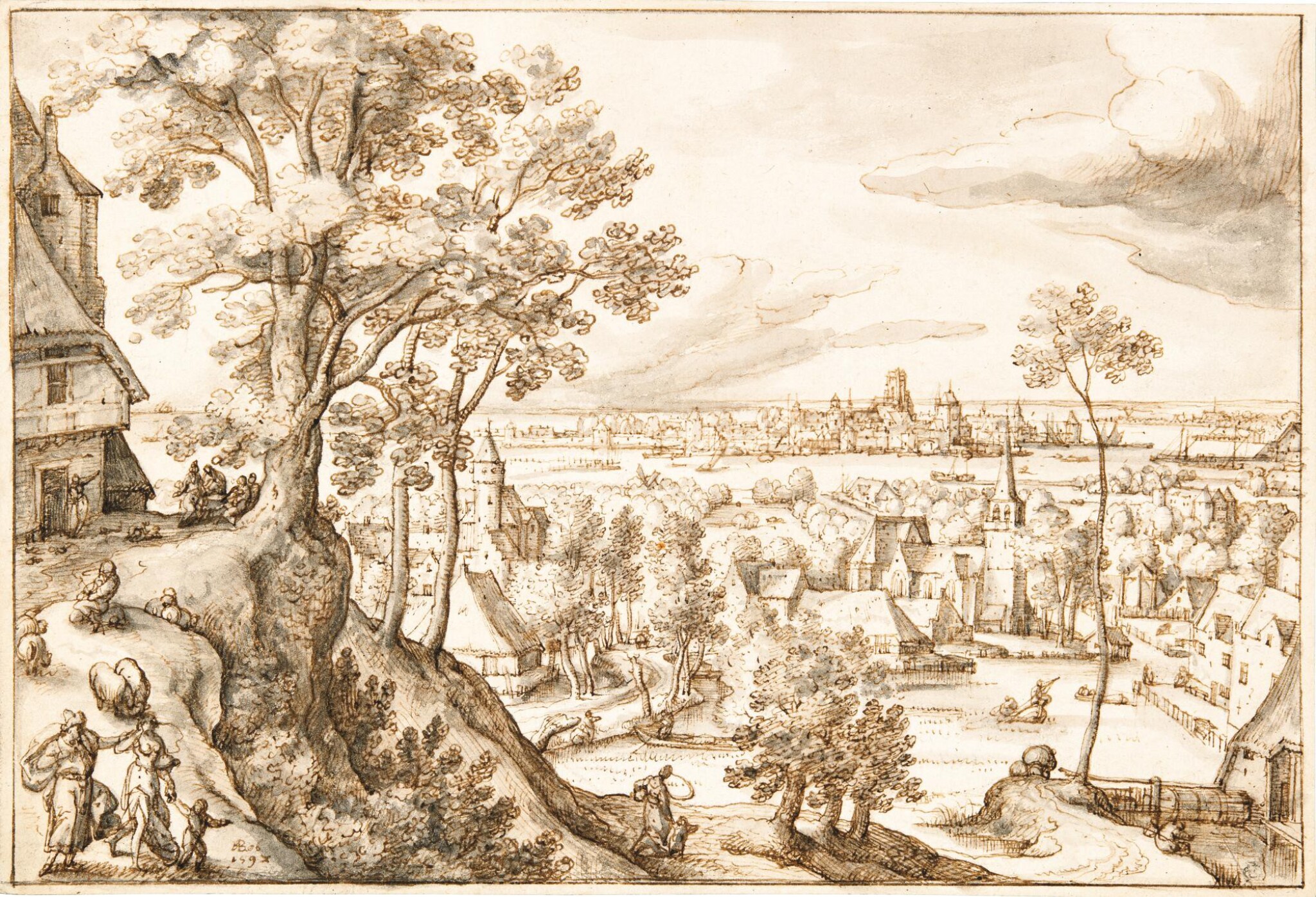 ABRAHAM SENDS AWAY HAGAR AND ISHMAEL

Pen and brown ink and gray wash, within brown ink framing lines and an original margin;

Private Collection, The Netherlands, since the 1960s

Beautifully drawn and exceptionally well preserved, this outstanding late work by Hans Bol encapsulates his approach and appeal as an artist. Its grand, multi-layered composition, animated penmanship and almost incidental biblical subject are all very typical of Bol’s approach to drawing throughout his career. The notional subject of the composition is the Expulsion of Hagar, but one has to look rather hard to find the figures of the protagonists, and in fact the real subject is the sweeping river landscape, and the extensive view of the Dutch city of Dordrecht in the background.

Hans Bol enrolled as a member of the painters’ guild in his native Mechelen in 1560. Following the Spanish occupation of the city in 1572, however, he moved to Antwerp, but moved on again when that city was in turn subdued by the ‘Spanish fury’ in 1583, first to Bergen op Zoom, and afterwards to Dordrecht and Delft. Finally, in 1591, he settled in Amsterdam, where he died two years later.

As Stefaan Hautekeete has kindly pointed out, the extensive city view in the background undoubtedly represents Dordrecht, with the distinctive silhouette of the Grote Kerk in the centre. It was by no means unusual for Bol to introduce real topographical views into the backgrounds of his compositions, even when the drawings were made as designs for prints, the titles of which only refer to the often almost invisible biblical ‘subject’. Other cities that can be found in his works include Bergen op Zoom, Brussels and Antwerp, all of which appear as the settings for depictions of the months, in the outstanding set of twelve round drawings of the Months of the Year, formerly in the Koenigs collection and now in the Boijmans van Beuningen Museum, Rotterdam, which the artist made in 1580-81.1 In his important article on Bol’s working method2, Hautekeete rightly points out that many more of Hans Bol’s landscapes may include real topographical views than is currently recognised, either because they are not quite distinctive enough to be identified, or because the views have actually changed so much in the intervening 450 years that we cannot make the connection.

In the case of this view of Dordrecht, however, there is no such potential for misunderstanding, as the view is extremely distinctive – and not much changed today – and we also have an extraordinary panoramic on-the-spot drawing of the city by Bol himself, in the Lugt Collection.3 Executed in metalpoint on four joined sketchbook sheets, the Lugt drawing must have been made from a boat on the river, and it or other similar topographical views of the city must have served as the basis for the present drawing. As Hautekeete has described, many of Bol’s finished drawings and gouaches are based on more rapid sketches, made ‘on location’.

Dating from 1592, the year before the artist’s death, this fine, late drawing sums up what is distinctive about Bol’s draughtsmanship, in the way it combines respectful reference to the pictorial idiom of earlier generations of Flemish masters, from Pieter Bruegel on, while also paving the way for the ever more topographical and naturalistic approach to landscape that developed in the northern Netherlands in the early years of the 17th century. When at his best, as here, Hans Bol was undoubtedly one of the most accomplished and appealing landscape artists of the later 16th century.