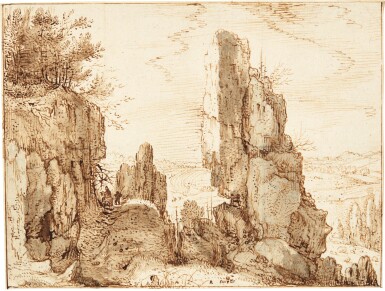 ROELANDT SAVERY | MOUNTAINOUS LANDSCAPE WITH TRAVELLERS ON A ROCKY PATH

ROELANDT SAVERY | MOUNTAINOUS LANDSCAPE WITH TRAVELLERS ON A ROCKY PATH

MOUNTAINOUS LANDSCAPE WITH TRAVELLERS ON A ROCKY PATH

Fixed to the backing sheet in all four corners. Slight signs of light horizontal and vertical folds, but otherwise exceptionally fresh and good condition. Sold in a modern imitation (CHECK) tortoiseshell frame.

Superbly fresh, and full of the light, atmosphere and drama of the mountains of Bohemia, this relatively unknown drawing by Roelant Savery must surely have been made around 1605-10, during the period when he was working for the Holy Roman Emperor Rudolf II, in Prague.

The highly cultured and artistically original court that Rudolf created in Prague in the years around 1600 must have been a phenomenally exciting place for an artist to visit. Roelant Savery travelled there in 1603, apparently entering the Emperor’s service soon afterwards. With the exception of a trip in 1606-7 to the Tirolean Alps, where the Emperor sent him to make drawings of ‘their marvels of nature’, Savery seems to have remained in Prague, working for Rudolf until the latter’s death in 1612. He returned to the Netherlands in 1613 or 1614, living out the remaining 25 years of his life in Amsterdam and Utrecht, but his earlier experiences in Prague were totally transformative for him, and defined his artistic path for the rest of his life.

In terms of drawings, the works that Savery executed during and soon after his journey fall into four broad categories: very precisely executed pen drawings of specific towns and buildings, looser, more rapidly drawn travel sketches, rugged, large chalk drawings of trees and mountains, and sensitive studies of peasants and other figures that he met along the way. In all these types of drawings, Savery broke new ground during his time in Prague, and set the scene for everything he would later do.

That said, remarkably few of the artist’s drawings are dated, so unless the view depicted can be identified, associations with Savery’s Prague period can otherwise only be made on stylistic grounds. One drawing that unquestionably originates from the artist’s stay in Prague is, though, the very grand mountain landscape, now in Berlin, which the artist proudly signed: ‘ROELANDT SAVERY 1605 F IN PRAEGE’.1 Two other drawings in Berlin, which can also be associated with the stay in Prague, show some stylistic affinity with the present work. The first is a very spontaneous, double sided sheet, the recto of which shows a view on the Moldau, by Prague.2 The second, a somewhat more carefully executed drawing of a watermill is particularly close to the present work in details of the foreground and foliage, and is also signed in exactly the same way.3 Hans Mielke thought the Berlin Watermill very close in style to the signed and dated drawing of 1605, and Joaneath Spicer also considered it to date from before 1607, so it seems highly probable that the present work is another that Savery made around 1605-10, during the course of his Bohemian travels.