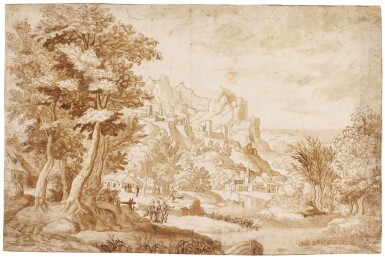 RUGGED LANDSCAPE WITH TRAVELLERS BY A RIVER

Pen and brown ink and wash, over indications in black chalk, within brown ink framing lines

Window mounted. Some thin areas and minor repairs down right edge. Made up top right corner. A little minor surface dirt and foxing, but overall condition good and fresh.

Jan van Scorel (1495-1562) was an artistic pioneer: the first artist from the northern Netherlands to travel to Italy, and study the works of Raphael, Michelangelo and others, and one of extremely few artists of the early 16th century who travelled to the Holy Land. His work, so influenced by what he had seen, was much sought after following his return to the Netherlands, and his stylistic innovations lived on through his two most distinguished pupils, Maarten van Heemskerck and Anthonis Mor.

Scorel's drawings are characterised by tense and energetic compositions, vivid penwork, distinctive, elongated figure types, and a broad application of wash that was very unusual for the period. The present drawing shows a clear awareness of Scorel's graphic style, and must originate from his orbit.