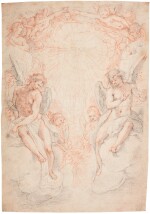 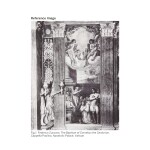 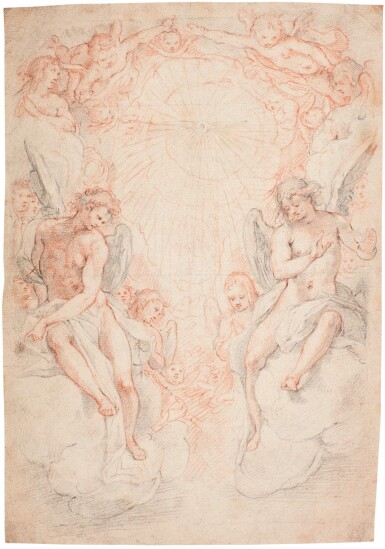 THE HOLY GHOST ENCIRCLED BY ANGELS

Hinged to mount at upper margin. Slight horizontal crease across the centre of the sheet and various vertical creases going down the sheet. Upper corners made up and some light staining around the edges of the sheet. Chalk remains strong and vibrant.

Sensitively drawn in an aesthetically pleasing combination of red and black chalk, this drawing is a preparatory study for the upper section of the fresco, The Baptism of Cornelius the Centurion, in the Pope's private chapel (the Cappella Paolina), in the Apostolic Palace, Vatican City (fig. 1).1

The Cappella Paolina was built by Antonio da Sangallo the Younger for Pope Paul III Farnese. Gregory XIII had originally commissioned Lorenzo Sabatelli to complete Michelangelo's decoration, but after his death in 1577, the task was offered to Federico Zuccaro, who began work in 1580 and finished in 1584.

Grand and majestic, this large scale drawing represents the upper section of the fresco where angels are seated on clouds and winged putti encircle the Holy Spirit, who flies upwards into an illusionistic sky. The drawing does not include the landscape that is nestled below the clouds in the fresco, concentrating instead on the two main angels that flank the left and right side of the composition and the other angels and putti situated around them. There are minor differences between our drawing and the finished fresco; for example in the present sheet there is a little putto between the two winged putti who hold hands at the upper centre of the composition, which is omitted in the painting. For the most part, the preliminary design is, though, followed in the fresco, where many of the figures' gestures and positions are unchanged.

Another preparatory drawing for the angels in the upper part of the same fresco is in the Uffizi, Florence.2  The Uffizi drawing, executed in pen and ink, focuses on the same section of the painting but there are significant differences, most notably in the angel on the left who gestures with his hand as he looks downwards to communicate with another angel below, who in turn looks towards the seated angel. This alternative interaction suggests the Uffizi drawing may precede our chalk study, as the fresco reflects the positions of the angels seen in the present composition.

Studies by Federico Zuccaro for the Cappella Paolina are rare, and this drawing is an extremely important record of one of the artist's most celebrated commissions.