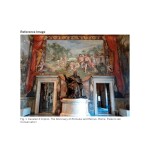 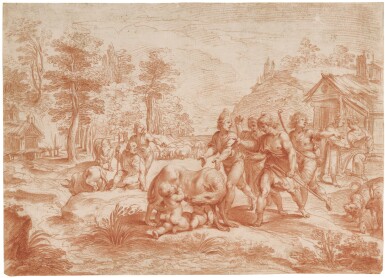 THE DISCOVERY OF ROMULUS AND REMUS

Hinge mounted to a modern decorative mount. There is some minor toning to the sheet and some light foxing to the upper edge. There is a small abrasion to the upper right quarter and a small repaired tear to the lower half of the left edge with a small abrasion above. Otherwise this unusually large and imposing sheet remains in very good condition throughout with the red chalk medium fresh and vibrant throughout and the image strong. Sold in a giltwood frame.

This very rare compositional drawing, executed in red chalk by one of the leading exponents of Roman Mannerism, Giuseppe Cesari, called Il Cavalier d'Arpino, is a fascinating and pivotal example of the artist’s graphic style and arguably the most important and representative drawing by the artist to survive. Unusually ambitious in scale, detail and level of execution, it is perhaps unsurprising, given the importance of the commission for which it was intended that the artist has gone to such lengths to create this elegant and accomplished sheet.

The subject depicted is The Discovery of Romulus and Remus, whose story in Roman mythology is legend, having led to the founding of the city of Rome. There are numerous iterations of the myth as a whole, however one common thread is the fabled discovery of the infant twins by the shepherd Faustulus, who comes across Romulus and Remus on the bank of the River Tiber, as they are suckled by a she-wolf. The tale of this remarkable and improbable survival is, of course, absolutely integral to the history of Rome, making depictions of this scene popular with artists and patrons alike, throughout the ages.

The present work, which remains in delightful condition, is the defining study for one of Arpino’s most important decorative projects in Rome, the decoration of the Sala degli Orazi e Curiazi, a cycle of six frescoes intended to appear like divided tapestries, in the Palazzo dei Conservatori in Campidoglio. The cycle illustrates episodes from the origins of Rome, including Tullus Hostilius defeating the army of Veii and Fidenae, The Battle between Horatii and Curiatii, The Rape of the Sabine Women, Numa Pompilius Instituting the Cult of the Vestals and Romulus traces the boundaries of Rome. It was, however, The Discovery of Romulus and Remus on which Arpino first began work, when he was entrusted with the commission in 1595, a project that was intended to be completed by 1600, but which, extraordinarily, only ended in 1640, upon the completion of Romulus traces the boundaries of Rome.

As noted by Marco Simone Bolzoni,1 the scene of The Discovery of Romulus and Remus was intended for the short wall of the hall, occupying a focal point within this magnificent room, and was initially conceived to a different scheme than we see in the present work and the final fresco, with a tighter group of bystanders around the she-wolf. This original conception is recorded in a pen and wash sketch, attributed to Arpino by Carel Van Tuyll,2 in the collection of the Musée du Louvre, Paris. What is clear is that between the execution of the Louvre drawing and the present work, Arpino had a fundamental shift in his priorities for the composition, opting for the space and breadth that is so very evident in our drawing, as well as the incorporation of a far more elaborate landscape and architectural elements. The positioning of the numerous figures within the composition, from the main protagonists in the centre foreground, to the two groupings of figures in the background, has allowed Arpino to create a more complex narrative than is found in the Louvre drawing, thus enabling him to far more effectively demonstrate his considerable talents. A black chalk study, depicting an alternative solution for the central grouping of The she-wolf with Romulus and Remus, is in the Albertina, Vienna,3 but this was ultimately rejected by the artist, in favor of his first idea, which remains unchanged between the Louvre drawing, the present work and the fresco.

As one would expect during any creative process, there are some slight changes, as noted by Bolzoni, between the present work and the finished fresco.4 These include the addition, in the fresco, of the shepherd entering the scene on the right side of the composition, as well as the peasant women preparing cheese outside the hut. Arpino also appears to further enrich the groupings of figures in the left background, with the addition of a sleeping shepherd, as well as a more distant figure, seated at the base of a tree. Bolzoni draws particular attention to the care with which the artist has drawn the view of the valley in our drawing, as well as the decisive strokes of red chalk he employs to outline the slightly smoky atmosphere of the sky, the tufts of grass in the foreground and the leaves of the trees, in the process breathing life into this ideal, bucolic landscape. Bolzoni also compares the handling of the present work to another highly atmospheric red chalk drawing by the artist, depicting A river landscape, in the collection of the Musée Calvet, Avignon,5 highlighting the delicacy of handling and careful delineation of the landscapes in both works, whilst suggesting a similar dating of circa 1595-97.

Besides the aforementioned Louvre and Albertina sheets, there are also a number of other surviving figure studies that relate to The Discovery of Romulus and Remus, all executed in either red or black chalk, or as in the case of a study for the group of Faustulus and the shepherds,6 in the Uffizi, Florence, a combination of the two. Scattered throughout a number of institutional collections, including the Staatliche Kunstsammlungen, Weimar, the Kunsthaus, Zurich, the Pinacoteca di Brera, Milan, the Musée Magnin, Dijon and The Morgan Library, New York,7 these studies further emphasize the fluid nature of Arpino’s creative process during this project, with some drawings entirely preparatory, while others show the formulation of ideas before a subsequent change of mind. While these sheets provide a delightful insight into this important commission, it is the present red chalk compositional study that not only epitomizes Arpino’s graphic style, with his idiosyncratic figure studies set in a wonderfully atmospheric landscape, but also encapsulates his ambitions, at the very outset of this significant project.