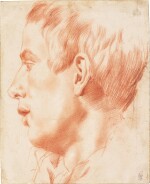 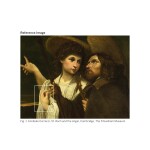 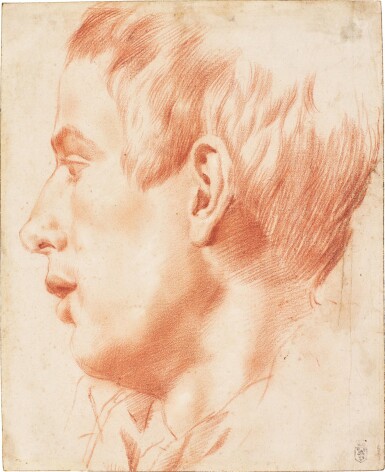 RECTO: PORTRAIT OF A YOUNG MAN IN PROFILE;

Hinge mounted along the left edge to an old mount which has subsequently been hinged to a modern decorative mount. There is very minor scattered foxing to parts of the recto with evidence of some minor surfaced dirt and small nicks to the extremities. There is an old repaired tear to the right edge and a gray circular stain to the upper right corner. There is a small tear to the lower left corner and some thinning to parts of the sheet, visible to the verso. The red chalk remains in fundamentally good condition throughout with the image strong.

by descent to the Duke of Sutherland,

London, The Lawrence Gallery, Sixth Exhibition, A Catalogue of One Hundred Original Drawings by Ludovico, Agostino, & Annibal Carracci collected by Sir Thomas Lawrence, Late President of The Royal Academy, 1836, no. 89 (as Annibale Carracci);

Catalogue of the Ellesmere Collection of Drawings at Bridgewater House, London 1898, no. 92 (as Annibale Carracci);

This attractive red chalk head study, depicting the head of a youth in profile to the left, and drawn on a scale slightly larger than life size, is a characteristic example of the charismatic studies from life, executed in chalk as well as oil on paper (see lot 30), to emanate from the Bolognese studio of the Carracci, from the 1580s onwards.

Formerly in the distinguished collections of Sir Thomas Lawrence and Lord Francis Egerton, 1st Earl of Ellesmere, where the drawing was always given in full to Annibale, Nicholas Turner (see Literature) has, more recently, endorsed this attribution, whilst also tentatively suggesting that the sitter may be identifiable as Baldassare Aloisi, called il Galanino (1577-1628), who was, according to Malvasia, the artist’s distant cousin.1 This identification is made on the basis of the youth’s similarities to the sitter in the drawn Portrait of Baldassare Aloisi, called il Galanino in the Kupferstichkabinett, Berlin,2 a drawing that is accompanied by a compelling red chalk inscription, thought to be in Annibale’s own hand, clearly identifying the sitter.

Turner makes a further case for the attribution of our drawing to Annibale, through the plausible connection of one of the hand studies on the verso of the present sheet with the left hand of the angel in Annibale’s painting of St. Roch and the Angel (fig.1), in the Fitzwilliam Museum, Cambridge, which Posner dated to the second half of the 1580s.3 Turner goes on to note how, stylistically speaking, the use of red chalk in combination with delicate stumping, found on the recto of our drawing, recalls Annibale’s An Angel Playing a Violin, in the British Museum, London, a study for the artist’s altarpiece of The Baptism of Christ, dated 1585, which was among Annibale’s first public commissions.4