Property from a European Collector 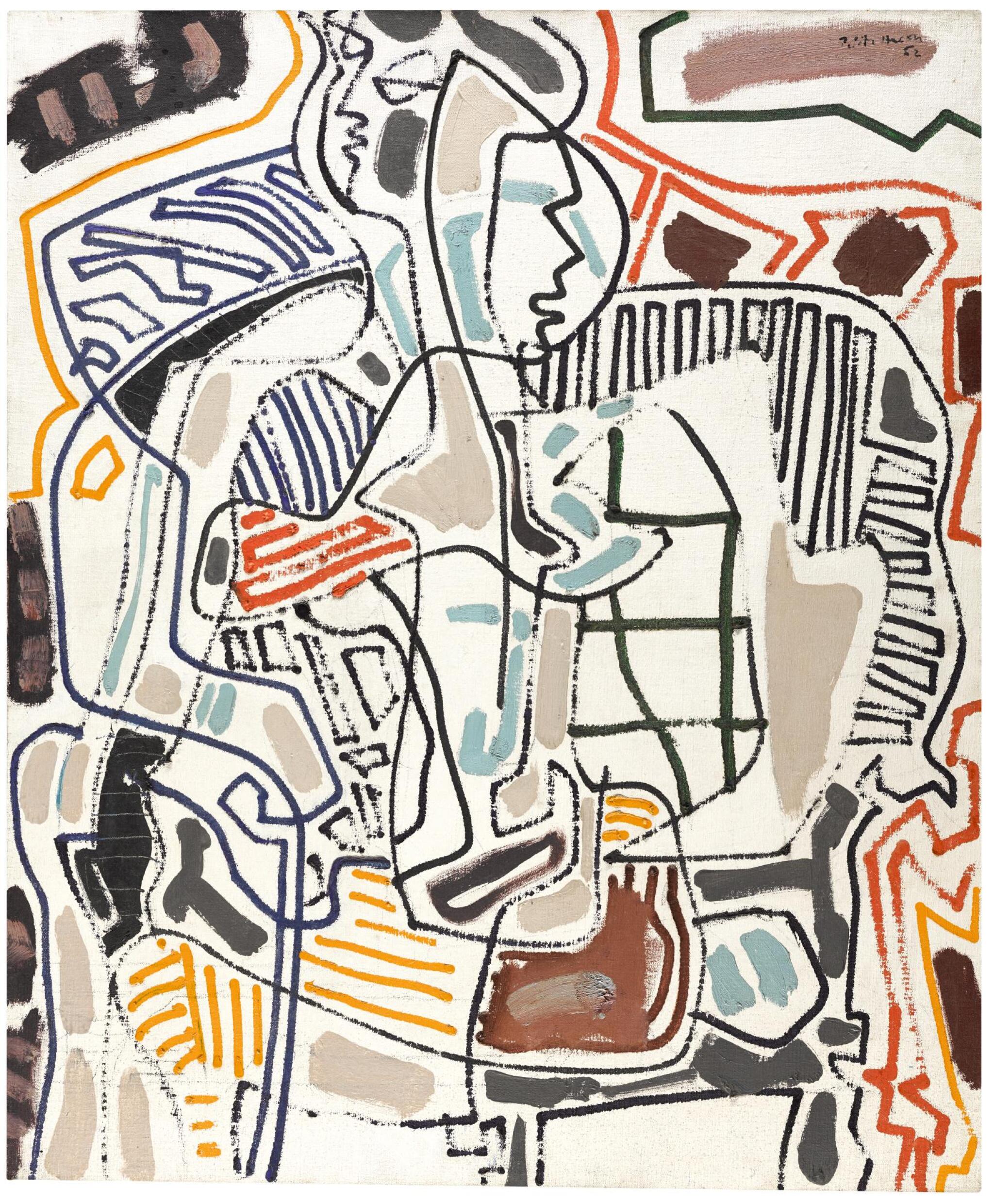 Property from a European Collector

signed and dated 52; also signed, titled and dated 1952 on a label attached to the reverse

The Estate of the Artist

Their sale, Christie's London, 20th November 2013, lot 20, where acquired by the present owner

A critic, author and artist, Patrick Heron is perhaps best remembered as one of the most important and innovative painters working in Britain during the Post-War period. He was a major voice of the European avant-garde, particularly in America, where notables such as Mark Rothko, Clement Greenberg and Jackson Pollock were aware of the powerful images being created both in London and St Ives– a remote fishing village that was at the epicentre of this creative movement.

Heron was an artist whose influences were from the outset wide reaching. His lyrical paintings from the 1940s and early 1950s, interiors and portraits produced prior to moving to an entirely nonfigurative style, draw heavily on influences from the continent. As he stated in a letter describing Harbour Window with Two Figures, St.Ives: July 1950 (Tate, London), painted two years prior to the present work in a similarly linear style: 'It was largely based on the French masters I so admired, and which I was alone (with William Scott) in England, let alone Cornwall, in being influenced by at that time ... From Braque came the idea of the 'transparency' of the objects: for instance the line of the carpet flows right through both the armchair, the legs of the nude figure, the table ... On the other hand, the nature of my charcoal drawing is far removed from Braque; for instance, there is not a single rigidly straight line, nor a pure arc or circle; in their loose and speedy linearity these charcoal grids are, therefore, if anything, nearer Matisse - though I would have thought they are perhaps personal and rather English' (Patrick Heron, Letter to Tate, quoted in Mel Gooding, Patrick Heron, London, 2008, pp. 74-5).

Heron’s paintings from this period explore multiple interpretations of visualising light and form, following the style of modern French masters. In the present work, Matisse-inspired lines and patches of non-representational colour are used to describe a series of overlapping forms and objects. While many of Heron’s paintings at this time focus on interior scenes, particularly of St Ives (see lot 16), he also produced a series of intimate portraits, drawing on those around him as his sitters, including his wife and daughter, the writer T. S. Eliot (1948, National Portrait Gallery, London) and the art historian and critic Herbert Read (1950, National Portrait Gallery, London). Heron’s portraits are experimentations with the eye’s vision and its natural points of focus, exploring what he termed the ‘camera eye’. It was through this innovative method of seeing that Heron hoped to discover in his art the ‘forms which life alone conceals’ (Patrick Heron, quoted in Michael McNay, Patrick Heron, Tate Publishing 2002, p.30).

A network of brightly-coloured linear and block patterns invite an intimate and amicable relationship between the girl and the viewer. The figure is almost indistinguishable from her surroundings, although we can identify two different perspectives of the face; one full-frontal perspective and one in profile. The location of the figure’s other features is relatively open to the spectator’s own interpretation. Objects that surround the girl are brought forward and reduced to an essential form; a technique inspired by Braque’s idea of the ‘transparency’ of objects. The continual and free-flowing nature of the lines which connect the carpet, chair and nude figure result in a piece where various individual elements are drawn into a united whole. The dynamic composition and intentionally-flat surface of the work further allow the human form and its environment to become one.