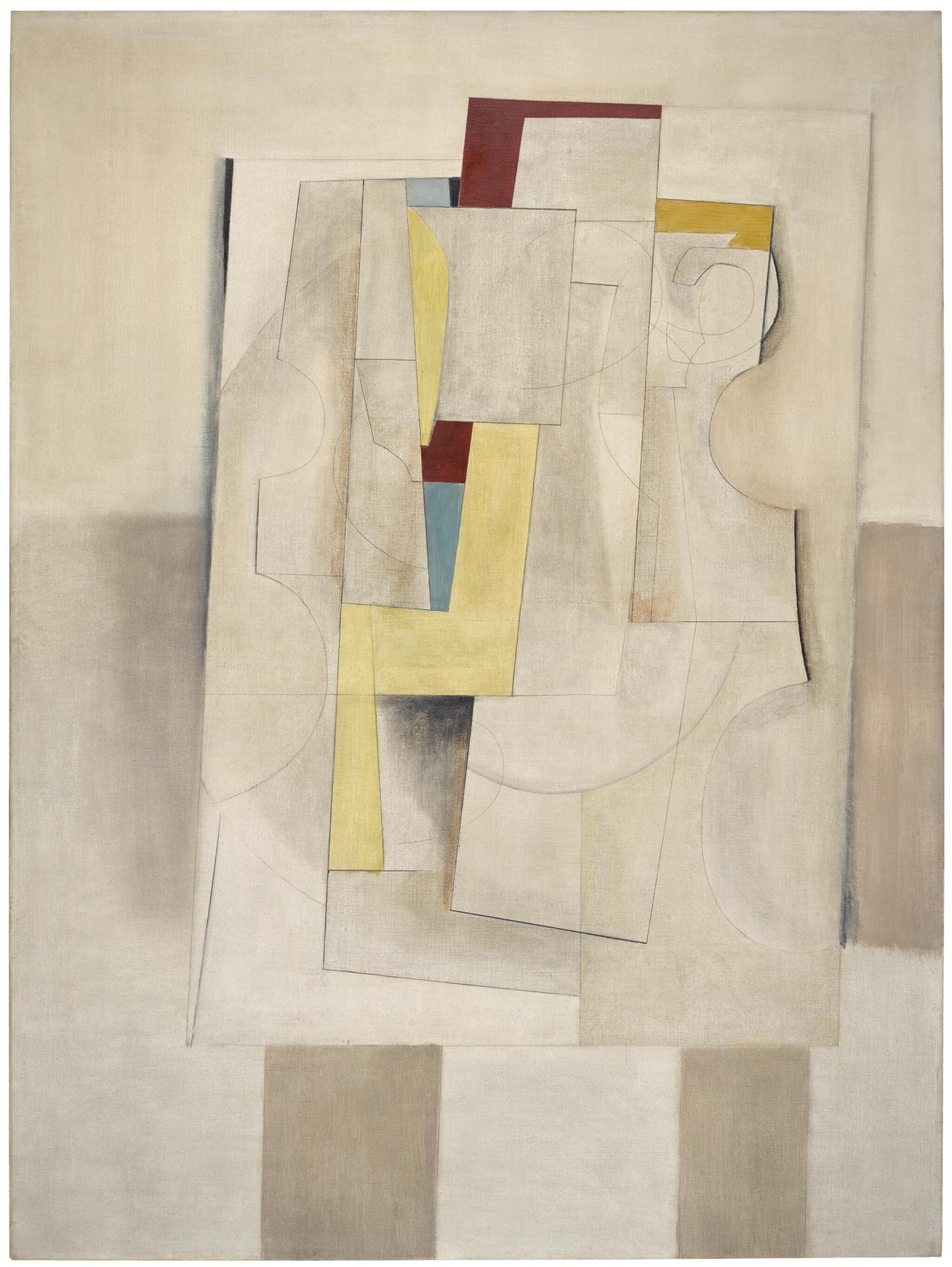 signed, titled, dated Dec 15 - 49 - and inscribed on the canvas overlap

Waddington Galleries, London, where acquired by the previous owners, 1964

Manchester, Whitworth Art Gallery, Modern Pictures from the Bernstein and Granada Collections, March - May 1965, cat. no.25;

We are grateful to Dr Lee Beard, author of Ben Nicholson: Writings and Ideas (Lund Humphries, 2019), for his kind assistance with the cataloguing of the present work. Dr Beard is currently preparing the forthcoming catalogue raisonné of the Artist’s work and would like to hear from owners of any work by the Artist so that these can be included in this comprehensive catalogue. Please write to Dr Lee Beard, c/o Sotheby’s Modern & Post-War British Art, London, W1A 2AA or email modbrit@sothebys.com.

This pivotal work dates from 1949, a year that marked a crucial new phase in the development of Nicholson’s compositions, heralding the advent of his large-scale Cubist-inspired still lifes. More than the work of any previous period, his paintings of the late 1940s and 1950s were responsible for bringing the artist widespread international recognition and commercial success, securing him a reputation as one of the most significant pioneering figures of British Modernism.

At the outbreak of war in 1939, Nicholson moved to Carbis Bay, near St Ives with his family where he used a small bedroom as a studio. During this period due to scarcity of materials and the limits of space, his work was largely small-scale. In the summer of 1949, however, Nicholson had the opportunity to move to a spacious new studio – Porthmeor which had formerly been the studio of Borlase Smart. Nicholson had managed to acquire and finance this studio in part due his commission from the architectural firm Easton & Robertson to produce two large works for the interior of a new liner the MV Rangitane, using the fact that he was about to create two vast panels as leverage in asking for the use of the space.

Porthmeor Studio suited his purposes perfectly: as well as allowing him to work on a scale hitherto largely out of reach to him, it also had top-light from skylights and no view of the beach onto which it backed. Thus, Nicholson was able to focus on a more interior world. The move resulted in an immediate explosion in the scale of works that Nicholson was to create. He was now able to introduce a new monumentalism to his canvases, lending them more weight and impact. This new sense of space is certainly evident in this work but also surely reflects Nicholson’s mounting confidence in handling compositions of this size in part due to the large panels he had created for the Rangitane commission, completed a couple of months earlier. It was during the years between the end of the Second World War and around 1953 that Nicholson created some of his most celebrated works, placing Dec 15 - 49 - still life (blue) within a particularly fruitful moment in his highly influential career. Examples from this period are found in many important museum collections, including Tate, London and The Arts Council Collection (see fig.1). He referred to this period and this development as 'bliss' (Nicholson, quoted in S.J. Checkland, Ben Nicholson: The Vicious Circles of his Life and Art, London, 2000, p.263).

Dec 15 - 49 - still life (blue) focuses on the traditional genre of the still life depicting everyday objects such as mugs and goblets laid out across a table-top but presented through the abstract idiom Nicholson had explored and honed over the previous decades. The genre of still life was at the heart of Nicholson’s practice, from his earliest work in the 1920s through to 1949 when he created this work and beyond into the 1950s and 60s. Nicholson’s move to St Ives inspired an increased interest in representational painting and by the mid 40s his focus was particularly honed on the still life. His interest was not in the still life per se; it was more concerned with the visual relationships that emerged as he integrated the still life forms with the world of abstraction. Coincidently, 1949 was the year Nicholson’s father died. William Nicholson was considered one of the most famous masters of the still-life genre in the early 20th Century, and it is interesting that it was at this time that Nicholson was re-examinnig his own treatment of the still life in his work. Nicholson would later credit his father's influence on his work, particularly the still lifes (see lot 9).

Despite the generous attribution of his success to his father, Nicholson’s exposure to Cubism in Paris in the 1920s and 30s, and his friendship with George Braque played a significant role in his treatment of the still life. He later recalled: ‘The real revelation came on a visit to Paris at the end of 1920 or spring 1921. I remember suddenly coming on a Cubist Picasso at the end of a small upstairs room in Paul Rosenberg's gallery... it was what seemed to me then completely abstract and in the center there was an absolutely miraculous green - very deep, very potent, and absolutely real’ (quoted in Ben Nicholson: Fifty Years of His Art, exh. cat., Albright-Knox Art Gallery, Buffalo, New York, 1978, p.9). The overlapping of planes, interlocking of shapes, and inclusion of multiple perspectives combined with the balance between line and blocks of colour in this work clearly allude to cubist influences and more specifically to Picasso and Braque’s Synthetic Cubism that they developed together in the first decade of the 20th Century. In 1955, Nicholson was to assert, 'Cubism once discovered could not be undiscovered, and so far from being that 'passing phase' so longed for by reactionaries it (and all that its discovery implied) has been absorbed into human experience as we know it today' (quoted in Ben Nicholson: A Retrospective Exhibition, exh. cat., London, Tate Gallery, June-July 1955, not numbered). Steven Nash also commented on the influence of Cubism on Nicholson's treatment of the still life at this time: ‘It has been noted that Cubism is the most enduringly revolutionary of all Twentieth Century art movements, and Nicholson's still-lifes … testify to its long-term generative power. Developed out of a basically Cubist vocabulary, they manifest a synthesis of Cubism and Constructivism, of colour and draftsmanship, of nature and the artifices of abstraction that mark them as both highly individual statements and meaningful extensions of the Cubist heritage’ (Ben Nicholson: Fifty Years of His Art, exh. cat., Albright-Knox Art Gallery, Buffalo, New York, 1978, p. 29).

This interplay between the representational and the abstract is explored to wonderful effect in Dec 15 - 49 - still life (blue): here the still life is used as a springboard for an exploration of compositional harmony. A rhythmic arrangement of delicate organic and geometric lines and pale forms coalesce and intersect in the center of this large composition. Regarded more closely, the fine, intricate lines reveal the forms of still-life objects: the undulating circular forms suggest the bases of glasses alongside more the obvious curves of mug handles and broken forms of goblets. Their forms interlace with one another so that they become a myriad of shapes which create a pattern of unfolding planes, highlighting the tension between the different visual perspectives. Nicholson skillfully balances the open and closed forms, contrasting straight lines and sharp angles with soft curves. Meanwhile, clean pencil lines are rendered against a subtly modulated ground of white and grey coloured planes to create space and depth in his unique abstract vision of a still life. Constructed with an almost sculptural sensibility, the composition hangs in a state of perfect equilibrium, infused with the sense of air and light that characterises the greatest of Nicholson’s still-lifes.

One of Nicholson’s great strengths was his ability to imbue light through tone, which can be seen in the series of creams, off-whites and insipid grey hues which radiate from this canvas. Against this background, Nicholson carefully positioned blocks of brighter pigments: a dusky yellow and shards of deep burgundy with a glimpse of grey/blue. The fusion of these warm and cool tones creates a sense of dynamism to the work, but also appears to represent various lights penetrating the composition: the grey/blue for instance, becomes a glimpse of sky through a window opening; the yellow, a narrow sunbeam; and the burgundy shows how light breaks into a prism of colour against the whitewashed walls.

Indeed, Nicholson was captivated by the purity of light that reflected off the swelling Atlantic. It was this light which is often credited as responsible for drawing artists to the fishing village of St Ives. Nicholson was to remark later in life how he found the subtlety of winter light of Cornwall far more interesting and appealing than the brighter light of Switzerland. As Patrick Heron commented: ‘the still life paintings are impregnated with qualities of light, texture and colour which convey one at once to St Ives. The over-clean ‘washedness’ of the cool colours and the smooth neat textures are qualities very precisely related to that rain-washed Atlantic-blown town. And the multiplicity of pale greys, off-whites, pale blues, purples and yellows all have a valid basis in the white ocean-reflected light which almost bleaches things in its diffuse radiance’ (Heron quoted in J. Lewison, Ben Nicholson, London, Tate Gallery, 1993, p.85). The architect David Lewis, Nicholson's friend and neighbor at St. Ives, was also to emphasis the importance of the play of light in Nicholson’s new studio on his work of the period: ‘… through the skylights came the reflected light of sea and sky. The studio was white inside, and its whiteness plus the light from the sea made sharp colors incredibly intense. Around the walls were stacked canvases; and on a shelf were the bottles and glass goblets which appear in so many of his paintings...’ (quoted in Ben Nicholson: Fifty Years of His Art, exh. cat., Albright-Knox Art Gallery, Buffalo, New York, 1978, pp. 31-33). The luminous quality of the pigments in this work certainly appear reminiscent of the Cornish light trying to break through the grey clouds on a winter’s day and this fusion of colour and form in Dec 15 - 49 - still life (blue) make this work a masterpiece in modernism in which Nicholson succeeds in effortlessly blending still-life with abstraction.

Nicholson can be seen in this work to be building upon his developments of the previous two decades, creating a unique aesthetic that would propel him to international acclaim. Two years later in 1951 he was invited to exhibit at the Festival of Britain and in 1954 at the XXVII Venice Biennale, where he was awarded the Ulisse prize, followed by a major retrospective of his work at the Tate, London and the Stedelijk in Amsterdam. In 1956, the Guggenheim International Painting prize for August 1956 (Val d’Orcia) would be added to his accolades and a year later he won 1st prize for painting at the IV São Paulo Biennal. Central to this success was Nicholson’s close relationship with the British Council, which under the leadership of Lady Somerville and Herbert Read helped promote his work from this time both at home and abroad. His work was represented in 40 exhibitions the Council organised between 1947 and 1960, successfully establishing him as one of the greatest and most innovative 20th Century British artists. Amongst the collection of works by Nicholson in the British Council is another example from 1949 (fig.1) following the same format, scale and interest in colour as Dec 15 - 49 - still life (blue).