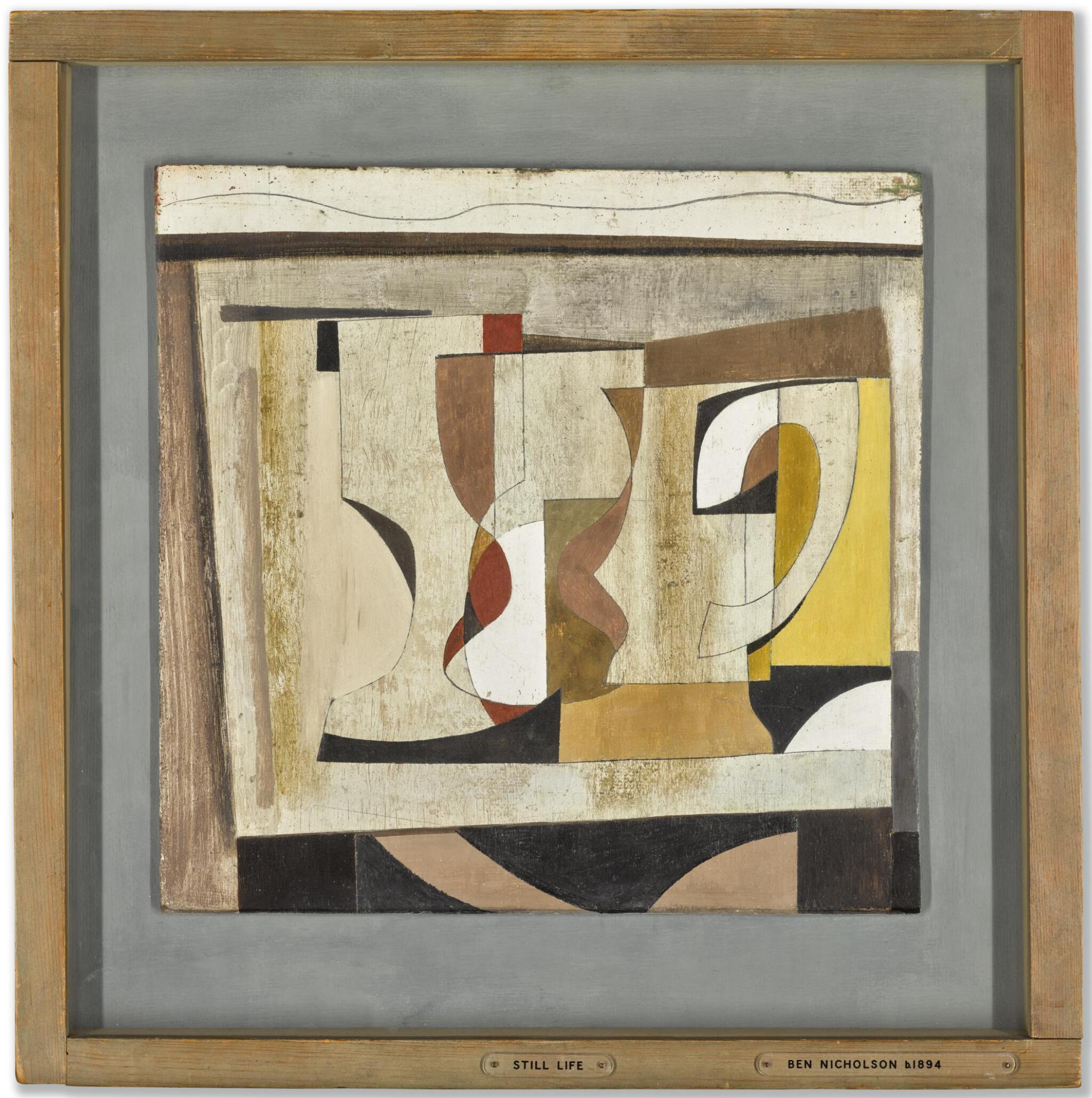 signed, titled, dated Feb 15 - 49 and inscribed on the Artist's backboard

'I have favourite places - Mycenae and Pisa, and Siena, for instance - and I feel that in a previous life I must have laid two or three of the stones in Siena Cathedral...' (Ben Nicholson, Sunday Times, 28th April 1963)

We are grateful to Dr Lee Beard, author of Ben Nicholson: Writings and Ideas (Lund Humphries, 2019), for his kind assistance with the cataloguing of the present work. Dr Beard is currently preparing the forthcoming catalogue raisonné of the Artist’s work and would like to hear from owners of any work by the Artist so that these can be included in this comprehensive catalogue. Please write to Dr Lee Beard, c/o Sotheby’s Modern & Post-War British Art, London, W1A 2AA or email modbrit@sothebys.com

Ben and Winifred Nicholson were married in 1920 and immediately set off on their honeymoon touring Italian cities and lapping up the influence of Italian Primitives such as Piero della Francesca. They were lucky enough to settle on the slopes of Monte Bré overlooking Lake Lugano where Winifred’s father bought the Villa Capriccio: ‘Each day was a miracle of sunlight, each evening a wonder of stars’ (Ben Nicholson, quoted in Norbert Lynton, Ben Nicholson, Phaidon London, 1993, p.16). They painted the villa interior white and Ben fashioned a studio from one of the small rooms. They spent each winter there until 1924, walking and painting, and Ben produced one of his earliest masterpieces, 1921-3 (Cortivallo, Lugano) (Tate Collection, London) which reveals the lessons learnt from cubism and his reduction of the landscape into elegant simplified forms. This early experience of the Italian lakes stayed with him and following the Second World War, he began an ongoing series of works referencing visits to Tuscany, Lazio and Umbria. Although he was clearly inspired by the monumental Italian architecture and the surrounding landscape, it is significant in light of his avant-garde achievements that one of his favourite subjects remained the traditional genre subject of the still life. Feb 15 - 49 (Siena) focuses directly on the table top objects themselves; the goblet, glass and mug each delineated in Nicholson's trademark style and framed in the distance by the elegant silhouette of the Tuscan Hills.

Nicholson had been interested in the still life from an early stage in his career and later recalled that 'of course I owe a lot to my father – especially to his poetic idea and to his still life theme. That didn't come from Cubism...but from my father' (Nicholson quoted in The Sunday Times, 28th April 1963). Sir William Nicholson's exemplary handling of objects in works such as The Lustre Bowl with Green Peas (1911, Scottish National Gallery of Modern Art, Edinburgh) must have been a clear influence, however, the present arrangement of the still life in front of a landscape was also one of his wife Winifred's favourite compositions. Although it was painted in 1949, the present work is highly reminiscent of Nicholson's style that he developed in the 1920s when they had experienced the French avant-garde at first hand; too-ing and fro-ing between the Villa Capriccio in Winter and London and Cumberland during the summer took them through Paris during the vital years of the Kahnweiler sales when they would have witnessed major cubist masterpieces at first hand. The interlocking shapes and stylised lines of the central still life in Feb 15 - 49 (Siena) clearly allude to cubist influences and more specifically to Picasso and Braque's Synthetic Cubism that they developed together in the first decade of the 20th Century.

The distinctive surface of Feb 15 - 49 (Siena) is also important. The underlying ground is clearly visible beneath the multi-layered paint surface and as such, draws attention to the physical nature of the canvas itself, a material that had been in short supply during the war years and which had only become readily available again in the late 1940s. Winifred highlights that it was Christopher Wood who introduced her and Ben to this technique of 'painting on coverine...it dries fast, you can put it over old pics' (Winifred Nicholson, Kit, unpublished memoir, Tate Gallery Archive 723.100, p.25). It created a firm painting ground which was visible beneath the painted image. In the present work, the textured paint surface takes on an additional three dimensional quality as the bold pencil drawing literally incises the surface, almost punctuating the board itself.

The first owners of the present work were the magazine publisher Sir Edward and his wife Lady Hulton. Following in the footsteps of his father who had founded several Manchester newspapers and once owned the London Evening Standard, Sir Edward founded the Hulton Press in 1937. He published several weekly magazines including Farmer's Weekly, Eagle, Girl and the pocket-sized Lillput magazine though his most famous title was Picture Post, founded in 1938. Picture Post had pioneered photojournalism in Britain and was bought by millions during World War II. In light of the significance of the images produced by Picture Post during this period, Hulton set up the Hulton Press Library in 1947 which now exists as the Hulton Archive, owned by Getty Images.