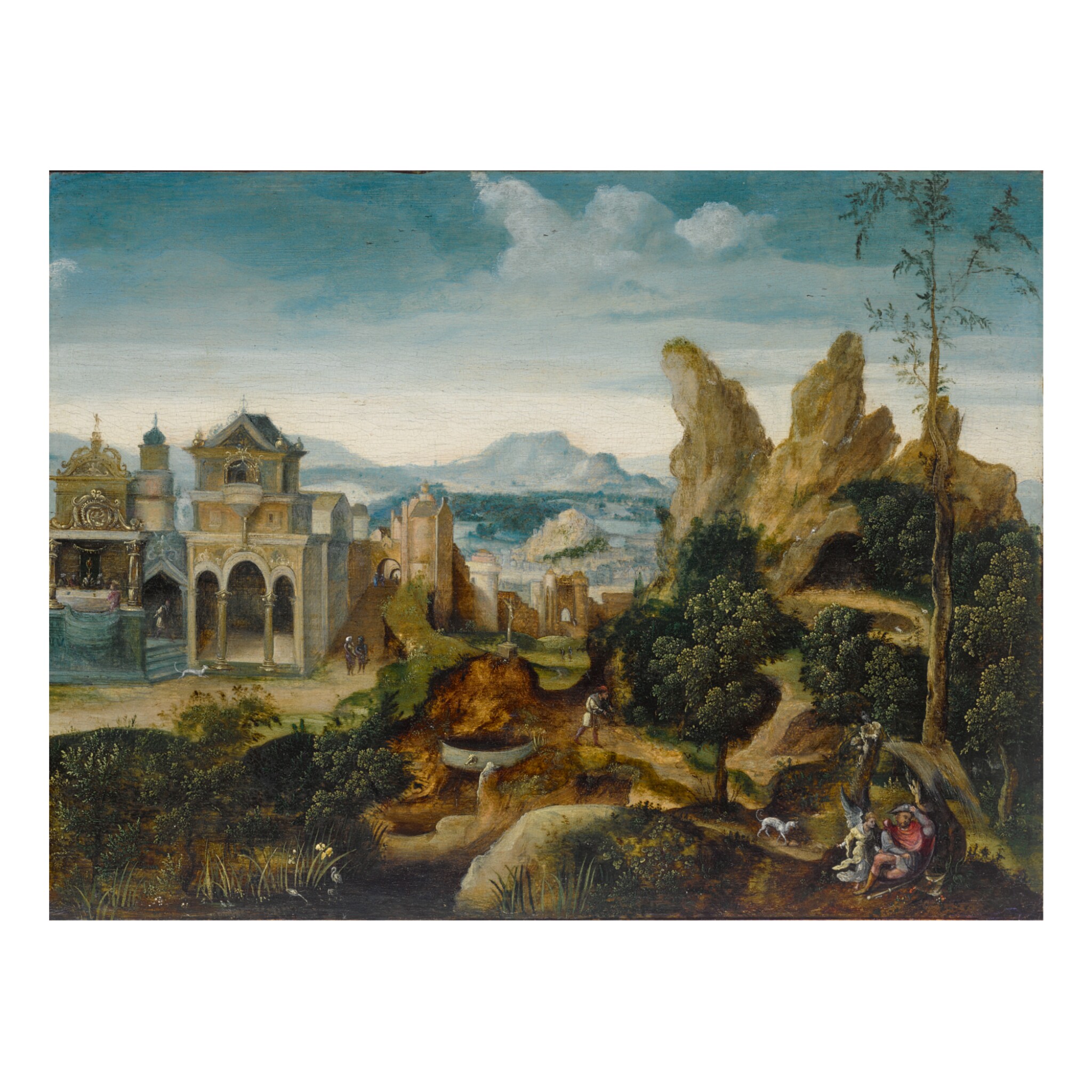 Property from an American Collection

THE MASTER OF THE FEMALE HALF-LENGTHS

(Active in Antwerp during the first half of the 16th Century)

MOUNTAINOUS LANDSCAPE WITH ELIJAH NOURISHED BY AN ANGEL AND A RAVEN

The panel is stable and unbeveled with 2 vertical supports and a horizontal strip of canvas on the reverse. From the recto, the panel is warped slightly convex along the bottom edge. The painting appears to have been recently cleaned or restored and an intricate landscape image reads well. The paint surface is stable and well preserved with small details like the texture of leaves visible. No areas of loss or restoration are visible to the naked eye. Under UV inspection, small spots of retouching are visible in the sky and in dark areas of shadow; these are concentrated in the upper right corner, in the cave at center right, near the dog at lower right, and in a few areas of the bushes at bottom center and left. The painting is in overall very good condition given its age and can hang as is. Offered in a dark-stained wood frame with gold painted decoration and the nameplate “Herry Met de Bles.”

Previously attributed to Cornelis Massys and Herri met de Bles, this landscape has been ascribed by Luc Serck to the same hand that painted the landscapes in the oeuvre of the so-called Master of the Female Half-lengths. While some scholars use the pseudonym to refer to an individual artist, Serck and others believe that the “Master of the Female Half-lengths” was in fact a small group of artists collaborating in a workshop and contributing according to their specialty. In this scenario, the landscapist was separate from the painter executing the famous half-length women (see lot 23 in this sale). In any case, this fantastical scene is an excellent example of the Antwerp landscape tradition in the first half of the 16th century. Whatever the identity of the artist, the underdrawing, visible with infrared reflectography (fig. 1), shows both precisely planned architecture and freely sketched foliage in the trees, indicating a confident and skilled landscapist.

The master or workshop was closely associated with Joachim Patinir (1483 – 1524), and may have trained with him, but a chronology is difficult because no painting in the group is dated. A similar landscape can be found in the Nelson-Atkins Museum, Kansas City (inv. no. 61-1) and several landscapes by the artist have appeared on the art market in recent years. The present work is an important addition to the master’s corpus, and adds to our idea of the artist, previously thought to specialize in depicting elegant women. The devotional works associated with the master, often holy figures seated outdoors with a fantastical landscape beyond (see, for example, The rest on the Flight into Egypt, Kunsthistorisches Museum, Vienna), serve as a bridge between the refined portrayals of ladies and the present work, in which the landscape takes precedence over the narrative.

The rather obscure subject of this painting is the Old Testament prophet Elijah receiving nourishment from an angel and raven. In 1 Kings 17, God sends ravens to provide food for Elijah in the desert, where he found a stream from which to drink. When the stream runs dry, Elijah ventures to the home of a widow for sustenance. Here, the angel offers something to Elijah while the raven perches on the broken tree branch above him. In the underdrawing, the stream appears to flow more freely, but in the finished painting it slows to a trickle. It became an artistic convention to substitute the widow and sometimes also the raven for an angel appearing to Elijah, and the motif of the angel giving bread also served as a metaphor for the life-giving bread of Eucharist. A viewer could almost miss the figure of Elijah tended by the angel in the lower right with all the contemporary detail, from Renaissance architecture to the Flemish clothing of the miniature travelers on the path. “Reading” a landscape painting like this was an intellectual and visual challenge and contributed to the demand for fantastical landscapes with subtle religious subjects in 16th century Northern Europe. Alternatively, the figure could be read as St. James, with his attributes of the staff, badge, and hat, resting under a tree after travelling through the mountainous landscape.

We are grateful to Dr. Luc Serck for proposing the attribution to the Master of the Female Half-lengths and for assistance in cataloging this lot.