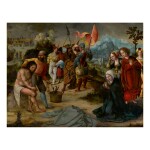 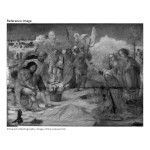 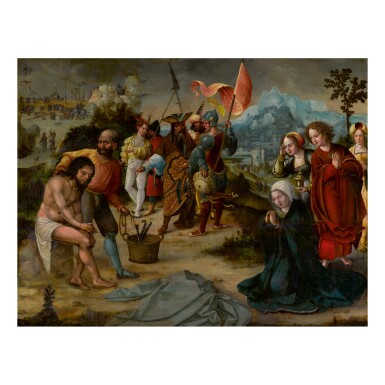 LEIDEN SCHOOL, CIRCA 1530 | CHRIST AT GOLGOTHA

LEIDEN SCHOOL, CIRCA 1530 | CHRIST AT GOLGOTHA

Infra-red reflectography of the present lot reveals extraordinarily free and assured underdrawing, and a number of changes in compositional ideas (fig. 1). The most notable of these is the adaptation of Christ’s pose from standing to sitting, and the removal of His Crown of Thorns and bound hands. In doing so, the artist has rewound this part of the narrative: the man beside Christ now holds the ropes with which he is about to tie His wrists, and Christ has not yet been crowned. Instead of the traditional image of the Ecce Homo, therefore, Christ is a picture of vulnerable resignation without any of the usual attributes. The artist also appears to have decided against including a toothed weapon on the ground next to other instruments of the Passion in the basket; described with a single zigzag stroke in the underdrawing, it is absent from the painting.

The figures are defined with confident outlines and hatching, while the background landscape is suggested with only the sparest lines to map out the mountainous silhouettes – the detailed depiction of Jerusalem (the circular form of the Holy Sepulchre visible in the center) was clearly worked up at the time of painting. An abstract mass of lines in the foreground constitute a rough guide for the form of Christ’s abandoned cloak, which is given rather unusual prominence.

The iconography of this painting amalgamates several episodes from the Passion into one picture of Calvary – Christ being prepared before His ascent to Golgotha; the crosses being raised in the background; Pilate discussing with his attendants in the center; and the Virgin, Magdalen and Saint John the Evangelist on the right in supplication. This combined simultaneity is relatively rare but by no means unheard of – it acts as a kind of devotional journey for the viewer. Other examples include the large and complex panel of circa 1520, in the Rijksmuseum, Amsterdam, based on a drawing by Albrecht Dürer, which Professor Dr. Jan Piet Filedt Kok attributes tentatively to Master J. Kock, an artist formerly associated with Cornelis Engebrechtsz. in Leiden, but now thought to have worked more independently in Antwerp [1]. The motif of Christ seated in despair also appears in that work, and may find its origin in others of Dürer’s engravings, which frequently provided inspiration for Netherlandish artists in the first half of the 16th century.

While Pilate and the figures around him and in the background on the right bear some similarity with contemporary painting in Leiden, the group on the right appears stylistically more comparable to the work of the Antwerp Mannerists. A lack of secure identification of the artists known to have been active in the Northern Netherlands at this time has led to many paintings being connected in one way or another to Cornelis Engebrechtsz. and his sons. Though parts of the underdrawing compare favorably with that found in some of Engebrechtsz.’s works, Professor Dr. Filedt Kok excludes the possibility that this painting was produced in the master’s workshop.